Kingmaker: Why Biden May Be the Target of Trump’s Impeachment
by Kevin Wilson

Ugh. Guys, I messed up. I got about halfway through an article suggesting that Tom Brady being good at football constitutes white supremacy, and then I had to go and drink a shit ton of Russian Sad Boy Juice to kill the brain cells holding that information, and then I went and started researching the whole impeachment thing, and now I’ve done screwed my whole worldview up, and oh my God please kill me before this sentence gets any longer. This wanton abuse of the common comma will not stand.

So here I am, staring at my computer screen as it spins lazily to and fro, and I had a thought: what if the timing of the Democrats’ move on impeaching Trump isn’t just a move against Trump?

I’m gonna call it. This is the first semi-official, mildly credible conspiracy theory of the 2020 election: Pelosi is making her move now, with the backing of the powers that be in the Democratic party, in the hopes of knocking Biden out of the running.

Joe Biden is, in many ways, the contender for the Democratic presidential nomination. The other frontrunners, like Bernie and Elizabeth Warren, are far too extreme to court the general population. They might play well with the loudest, most vocal parts of the Democratic base, but Trump will hammer them up one way and down the other with moderates who’re kinda worried about this whole socialism thing. And what with Beto “I Am The Greatest AR-15 Salesman In History” O’Rourke hardening the Republican base in a way that we haven’t seen in years, the Democrats absolutely cannot afford to alienate moderates on either side by choosing a candidate who’s extreme on, well, anything.

They have to play towards the middle of the road. They can’t afford to make the bold, risky choice if they want to have a hope in hell of beating Trump.

Biden is, far and away, the safest choice they have. He’s relatively moderate, compared to (most of) the rest of the field. He has experience as a Vice President, and as Vice President to the most popular President-President in recent memory. Okay, sure, he’s a little creepy, but he hasn’t been dumb enough to get caught saying he was going to grab anyone by the pussy on camera, either. And hell, he probably doesn’t even know what a Twitter is. If he has social media, it’s surely some poor intern running it, so no risk there.

In short, Biden is the safest candidate they have: a known entity who can play towards the middle and who doesn’t have any major skeletons in the closet. Or at least, that’s what we thought.

Trump and friends know this. If Pelosi actually gets enough support to formally impeach the President, or hell, start a formal investigation, Trump and his team are absolutely going to hammer Biden into the ground. It doesn’t matter that there isn’t much evidence, yet, of his direct involvement in his son’s shady dealings. It doesn’t matter that there likely will never be anything solid, or at least solid enough to hold up in a courtroom.

Unfortunately for Biden, the court of public opinion has a much, much lower threshold for conviction, and he doesn’t have anywhere near the public presence or force of personality that allows Trump to shake off equally shady allegations with startling regularity.

Now here’s the conspiracy theory: Pelosi and company not only know that, they’re counting on it.

The Democrats know Trump is far too slippery to actually nail on something this nebulous. They’ve gone at him hammer and tongs almost continuously for the last four years, and haven’t made an appreciable dent in his levels of support. They can get as many celebrities to say they hate him as they want. They can call him racist, sexist, homophobic, whatever. The folks who are inclined to believe them are already in their pocket. Hell, if they don’t play this whole impeachment thing exactly right, there’s a really good chance Trump will turn it in his favor, in the long run.

And the Democratic leadership knows that. They’re wildly, painfully aware of the risk. And they’re doing it anyway.

Why? To take out Biden. 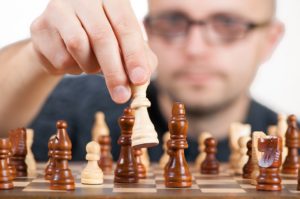 They want him gone precisely because he is the safe candidate. If Biden was to get elected, we can all look forward to business as usual for the next 4-8 years. It’s safe, it’s predictable, and it’s exactly the last thing they want right now.

See, I think the Democrats want a Trump of their own. They don’t want safe, they want what they perceive to be an anti-Trump weapon, someone who will say wild shit and convince voters that they’ll actually do it. But they also want someone to say that in such a way that contrasts them with the brash, blustery Commander in Chief.

No matter how you slice it, the ideal candidate for an anti-Trump is not Joe Biden. And so, he has to go. Only, they can’t count on the primaries to do it for them. They already got caught with their hands in the cookie jar once, pushing Hillary over Bernie. They can’t afford to take that sort of action again, which is why they’re acting now. Because once Biden gets his foot in the door, it’ll be almost impossible for any of the current crop of candidates to seriously challenge him.

And the best part, from their perspective, at any rate, is that a large segment of the party will thank them for it.

The far Left of the Democratic Party would absolutely vote for Biden over Trump, but they wouldn’t be happy about it. Many of them are only nominally part of the Democratic Party in the first place. They’re presenting a unified front in the face of what they see as an unthinkably evil opponent, but they’ve been discontent with the mainstream party for years. Hillary stealing the primary from Bernie, and then losing to Trump, was very nearly the last straw. If it wasn’t for their uniting principle of Orange Man Bad, I seriously think we might have seen the Democratic Party split in two: the Democrats, and the Democratic Socialists.

If Biden was to run and win, the shared hatred that kept the fractured party together would vanish. If he was to run and lose to Trump, the potential for a party split becomes exponentially greater. On the other hand, putting forth a riskier, more blatantly Leftist candidate, is a win/win for the party leadership. If they win, then the dissatisfied will have been thrown the biggest bone in human history: the office of the President of the United States of America. If they lose, the leadership can hammer them over that for at least the next decade. All they need to do is get Biden out of the way, first.

And that’s why I think they decided to move against Trump now, with Biden’s son as the catalyst.

Now I could be wrong. Don’t let my relatively clean spelling and grammar fool you; I’ve got three sheets firmly to the wind right now, and buddy, there’s a storm a-brewing. I’m probably so wildly incorrect, my wild-ass guesses actually loop back around to almost being right, in a completely wrong sort of way. But hey, that’s how you get a good conspiracy theory in the first place. It’s not enough to be wrong, you have to be so wildly wrong that people think you might actually be right.