HomeNational SecurityDefenseHere Is What The World Thinks About The US Navy Right Now, In One Cartoon 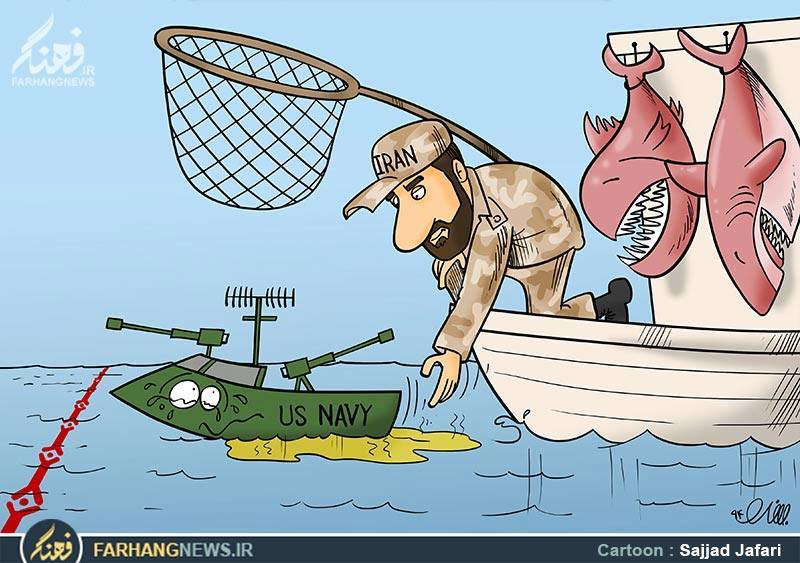 This article was originally published in The Havok Journal on 17JAN16.

The US veteran community and much of the rest of America have been in an uproar lately over an incident in which two US Navy boats and ten or so sailors were detained inside Iranian territorial waters last week.  The entire situation, for which the US Navy admitted blame and in which no one on either side was harmed, lasted less than 24 hours. But the consequences will be far reaching.

Now before anyone thinks I’m jumping on the “Make America Great Again By Bombing Iran” bandwagon, let me assure you that I’m not.  In fact, I’m in the middle of writing an article about how everyone needs to calm the hell down about this whole thing.  But dismissing this as “not a big deal” is disingenuous.  What happened *is* a big deal.  Here’s why:

The US is already looking weak in the region; our nuclear deal with Iran frees $100 billion in frozen Iranian assets for a promise that Iran will behave when it comes to their nuclear arms development.  It does nothing to address the situations in Syria, Iraq, or the Levant, where US and Iranian national interests are diametrically opposed, and where Iranian machinations have led directly to the deaths of US citizens.

Moreover, the US has been slow to try to reign in the Iranian-influenced insurgency in Yemen or to use their influence to promote peace between Israel and Palestine.  Simply put, Iran’s power in the region is on the rise and America’s is waning.  That’s causing a lot of people, including regional powers Israel and Saudi Arabia, to become very, very concerned.

That brings us back to the most recent example of the perception of Iranian power, the detention of the two US boats and their crews.  Let me explain what you’re looking in the picture above:  the mighty nation of Iran patrols its waters, vigilantly eliminating threats (sharks).  The US Navy, which is shown crying and peeing itself, is such a non-issue to the Iranians that they did a little catch-and-release, shooing the US back to where it belongs… firmly OUTSIDE Iran’s area of influence.  Wow.

“But Scott, why are you doing the Iranians’ job for them by promoting this propaganda?” I am doing no such thing.  This cartoon is in English, not Persian; it’s intended for an English-speaking audience.  Specifically, it is intended for people like you. And you should see it, and it should piss you off.  But it shouldn’t make you want to go to war over it.

The Middle East is an unstable region, and instability there greatly affects stability in the rest of the world.  We can argue all day about who is to blame for this situation, but it’s a fundamental fact that a lack of US resolve and commitment in the region causes even greater problems.  Weakness and inaction, or the even the perception of weakness and inaction, encourage aggression.  And this aggression is not just from unfriendly nations; our regional allies, perceiving that the US lacks the ability or will to protect them and their interests, might take aggressive action on their own.  Because of our various alliances and interests in the region, impetuous acts by nations friendly to us can cause all kinds of long-term problems.

The incident with the two Navy boats was not worth going to war with Iran over.  But if we continue to allow the perception that we are weak, that we lack will and staying power, and that Iran can do whatever it wants in the region, then we are setting ourselves up for big trouble in the future.  There are many ways we can telegraph strength to those who wish us harm, and send reassuring signals to our allies in the region, and we can do that in ways that aren’t limited to brute military force.  But we’ve got to repair the erosion of our influence in the region, and we have to stop making tactical and strategic blunders that undermine our credibility and endanger the long-term stability of the region.