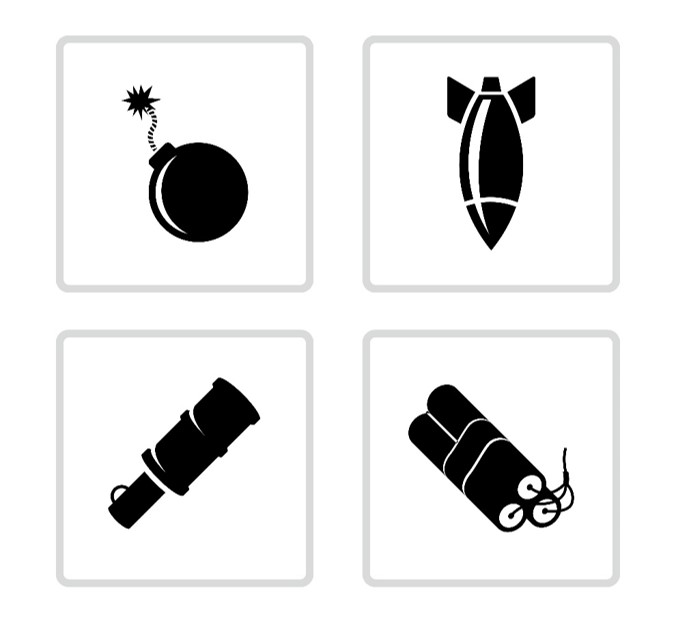 Last week, United States Central Command (CENTCOM) publicly released its summary of the administrative investigation into October 3, 2015 incident in Kunduz, Afghanistan where a U.S. AC-130 gunship supporting U.S. Special Operations Forces struck a Médecins Sans Frontières (MSF), also known by its English name Doctors without Borders, medical clinic. The public release of the results of that investigation have long been awaited by humanitarian organizations, human rights organizations, foreign partners, and intergovernmental organizations, not the least of which is the International Criminal Court (ICC). 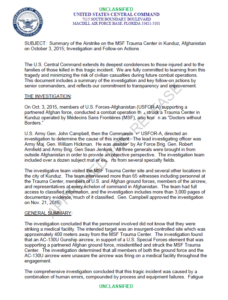 Many human rights advocacy organizations, like Physicians for Human Rights (PHR) and MSF came out very quickly after the incident accusing the U.S. of war crimes because it had struck a hospital. These statements revealed a lack of understanding of the law of armed conflict, the legal regime that applies during armed conflict; dead civilians and bombed hospitals, by themselves, do not constitute war crimes. In fact, they don’t even constitute what’s referred to as a prima facie case in the criminal justice world.

Virtually every criminal justice system in the world applies a mental element to crimes. The state must prove that an alleged perpetrator possessed the criminal intent to commit the crime. This is generally referred to as mens rea. Many of our international partners refer to it as modes of liability. The CENTCOM report states that the “label ‘war crimes’ is typically reserved for intentional acts – intentionally targeting civilians or intentionally targeting protected objects” like hospitals. Therefore, according to CENTCOM, the strike on the MSF clinic could not have amounted to war crimes.

The CENTCOM report represents one view, and human rights organizations quick condemnation without analysis represents another. The truth is actually in the middle. The CENTCOM report does little to add to the transparency of the U.S. military investigative process, and does almost nothing to effectively message the answers to the question as to why no one will be prosecuted for the Kunduz strike, not only for war crimes, but for any crimes. This is due to several key pieces of information that are conspicuously absent from the report.

First, U.S. military members operating pursuant to military orders who commit alleged crimes in Afghanistan are prosecuted under the exclusive jurisdiction of the U.S. courts-martial. The criminal code for U.S. courts-martial is the Uniform Code of Military Justice which can be found in 10 U.S.C. section 901 et seq. A close review of the UCMJ will show that there are no mechanisms under the UCMJ to prosecute someone for “war crimes.” Instead, it is the policy of the United States military to prosecute such individuals for the base offense. For example, in one of the more infamous war crimes committed by U.S. forces in Afghanistan, SSG Robert Bales – the U.S. soldier who killed sixteen innocent civilians in Panjwa’i – was charged and convicted of murder, not war crimes. Bales clearly committed a war crime by intentionally targeting civilians, but could not be charged with war crimes because there is no mechanism under the UCMJ to do so. Accordingly, if the U.S. admits that a war crime had been committed, yet does not charge anyone for a war crime, it could spark the interest of other judicial bodies that do have a mechanism to prosecute war crimes, bodies like the ICC.

The U.S. allergy to the ICC is famous. Much to the chagrin of our international partners, the U.S. is not a friend of the ICC. Congress even went so far as to pass a law called the American Service-Members’ Protection Act (ASMPA) which authorizes “all means necessary … to bring about the release of any U.S. … personnel being detained … by … the International Criminal Court.” Colloquially, it’s called the Hague Invasion Act, denoting that the U.S. could use force to free U.S. military personnel from the ICC, which is located at The Hague, Netherlands. The ICC, however, typically only targets high ranking war criminals, not low level actors, leading many in Washington to more realistically refer to ASMPA as the “Donald Rumsfeld Protection Act.”

The U.S. owes nothing to the ICC, but as a messaging tool, the CENTCOM report fails to alleviate the concerns of our international partners who are members of the ICC, by stating that the law of armed conflict was violated, but no war crimes had been committed. This dismissiveness is hardly effective. Surely CENTCOM knew that experts in the law of armed conflict were going to read both the report and the investigation. Incidentally, some members of the Office of the Prosecutor at the ICC believe that the ICC does have jurisdiction over U.S. servicemembers in Afghanistan.

Second, the Report fails to mention that under Article 119 of the UCMJ, there is a mechanism to prosecute someone for involuntary manslaughter using a criminal negligence standard. Under the UCMJ’s standard, someone can be prosecuted for involuntary manslaughter when he is culpably negligent. According to Department of the Army Pamphlet (DA Pam.) 27-9 “[c]ulpable negligence is a degree of carelessness greater than simple negligence. Simple negligence is the absence of due care. The law requires everyone at all times to demonstrate the care for the safety of others that a reasonably careful person would demonstrate under the same or similar circumstances; this is what ‘due care’ means. “Culpable negligence” is a negligent act or failure to act accompanied by a gross, reckless, wanton, or deliberate disregard for the foreseeable results to others.” DA Pam. 27-9 is the Military Judge’s Benchbook. It has been adopted by all of the services and is akin to pattern jury instructions in the civilian world. Basically that means that a prosecutor would have to prove this in court. Involuntary manslaughter is a serious offense under the UCMJ. If convicted, an Accused could face up to ten years in prison and a dishonorable discharge. 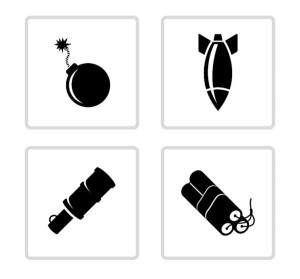 The CENTCOM report fails as a messaging tool because it fails to answer the question that we all want answered. Why are there no criminal charges resulting from the Kunduz attack? That’s what everyone really wants to know. If a crime had not been committed, then why did the conduct not amount to a crime? The Department of Defense stated that this was a terrible accident. Fine, but the heart of the matter that the CENTCOM report should have answered is whether the investigation found that the individuals involved in the targeting were more than just negligent: were their accidental or “negligent” acts accompanied by “a gross, reckless, wanton, or deliberate disregard for the foreseeable results to others.” That is the question that should have been answered, and that is the answer that should have been clearly messaged in both the investigation itself and the CENTCOM report.

The Department of Defense and CENTCOM missed an opportunity here because U.S. servicemembers who were involved in the Kunduz strike were likely not culpably negligent. A recent New York times report that can be found at http://www.nytimes.com/2016/05/09/world/asia/afghanistan-taliban-kunduz-doctors-without-borders-airstrike.html?_r=0 comes the closest to describing the chaos and confusion that often accompanies ground combat. One can begin to see how the accident could have occurred, and at the same time begin to see that the actions of U.S. personnel on October 3, 2015 fall short of recklessness or wantonness.

The CENTCOM report failed to articulate these key facts, and that is precisely what the world wanted to know. In that regard, CENTCOM report represents another missed opportunity in a long history of poor messaging of this incident. This long-awaited report is the culmination of an incident that killed forty-two people, an investigation that was over 3,000 pages long, and a debate that sparked the ire of not only the human rights community, but also that of many of our international partners, and all we get is a “these are not war crimes” hand wave. We are smarter than that, and the families of the victims of this attack, as well as the servicemembers who were there deserve more.