The major bleeds never change. Nor do the sequences for each of them. If you understand how to identify and treat each of the six major bleeds in CTM you’ll be set up for success. But remember, if TPA was “a kick in the balls”, then CTM as the same instructor put it, is: “a battle-ax to the balls”… (again, pardon my French…).
It’s excellent training. I can honestly say I’ve never done anything so challenging as CTM. When you understand it and get it right it’s a good feeling.

This block involves Tactical Combat Casualty Care (TCCC), which is the same as they taught during your 68-Whiskey training back in AIT and the EFMB if you did that at PreSOCM (remember, I said try not to brain-dump all that?). The key word is ‘tactical’. Think: return fire before you do ANYTHING! Stay low. Find cover. Otherwise you’ll end up taking some paintball shots to the face.
Very few people fail TCCC. It’s a chance to catch your breath and recover from CTM. 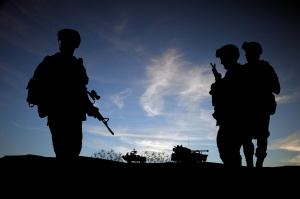 But don’t let your guard down. Next is Advanced Trauma Management (ATM, not to be confused with ‘ass to mouth’ or ‘automatic teller machine’). ATM will see you manage a patient in a more definitive care environment like a Forward Operating Base (FOB) where you will be managing a team of clinicians including another SOCM medic, a 68-Whiskey, and some first-responders who can do things like bag/ventilate your patient. The emphasis in ATM is on managing the patient care and leading a team. You have to know your algorithms. Electrical burns and Crush syndrome are two of the hardest scenario’s as they incorporate some ACLS scenarios as well as treatment of rhabdomyolysis.

However, it’s an open book test. You can take your Tactical Medical Emergencies Protocols (TMEPs) into the test with you and refer to it (although it is not the easiest book to navigate). You can even annotate the pages with the ACLS drugs and sequences. There’s no reason for you to fail this block, but every class loses 3 or 4 people here. It’s not easy. But students are often so burnt out by this time that they don’t put in the hours required to study. Don’t be that guy.

Once you’ve passed ATM, you’ll do a brief Field Training Exercise (FTX), where you’ll have some fun out in the field for about 5-days taking turns being the lead medic in a 4-man team responding to various real-world tactical scenario’s. This is great training. You’ll be out in the HUMVEE’s and you’ll be working with the canine’s too. Lots of fun. Comparable to Camp Bullis at AIT, but without the TRADOC nonsense. There is a rumor they will start incorporating Blackhawks into the FTX also.

Finally, you’ll finish Trauma 3 and go on your 4-week clinical rotation. At this point you’re pretty much done. No one really fails their clinical rotation unless they do something stupid like get caught fraternizing with the staff or get drunk and get into a fight, etc… If you’re going to get caught doing that then reap the whirlwind brother – you just flushed almost a year of the hardest military medical training down the toilet for nothing. Congrats. If however you want to get the best out of the experience, try to get selected to go to Flint, Michigan. It’s a new clinical rotation venue and much more dynamic that the other locations of Virginia and Florida. That’s not to say you can’t get something out of the other rotation sites, but they won’t compare to Flint.

In May 2013, I had the honor of being the first Ranger Medic to go on clinical rotation to Flint, Michigan. One of the reasons Flint was selected as a clinical site is because it has one of the highest rates of penetrating trauma per capita in the United States. This is a direct reflection of the crime rate. In 2011, the Wall Street Journal voted Flint the ‘Most Violent City in America’. The homicide rate backs this up. In 2012, Forbes rated Flint the sixth ‘Most Violent City for Women’. During my brief 30-day rotation, a woman in her 70’s was raped so violently her acetabulum was fractured, and a woman in her 20’s was shot in the head in a drive-by shooting. She was 18-weeks pregnant.

Yet Flint used to be a thriving city back in the 1940’s, comparable to New York and Los Angeles. Still known as ‘Vehicle City’, Flint was the home of General Motors and as the automotive industry boomed, so did Flint. As one of the Sheriff’s related, “The problem with Flint is it put all its eggs in one basket. When General Motors moved out of Flint, so did the jobs…”. Before the 1973 oil crisis and subsequent collapse of the automotive industry, GM employed over 80,000 people locally. By the year 2000, this number had dropped to just 8,000. As the jobs and people left, the crime rate soared.

These facts took on a greater meaning to me when I met some of the inspiring individuals who had stuck with Flint, even when the money left. One Emergency Department (ED) doctor had worked at Hurley Medical Center (the only level 1 trauma center in the region) for over 20-years, and his father had worked as a physician in Flint before him. Many of the Sheriff’s and Deputies had generations of their family who were born and raised in Flint. With their qualifications, they could easily have moved away and found a better place to live. But they didn’t. If you have the fortune of going to Flint on clinical rotation you’ll be impressed by the character of some of these people. The ones that stayed are a tough breed who don’t quit easily. As Rangers and SOF medics – that’s an attribute we have drummed into us day-in day-out.

Flint was sucker-punched when GM pulled out. But it has a second chance to come up fighting. The three universities in the area – Mott Community College, the University of Michigan, and Kettering University – are slowly reinvigorating local development. The SOCM program undoubtedly plays a role in that redevelopment. Hurley’s connection with the Joint Special Operations Medical Training Center gives it a prestige that few hospitals can claim. This was apparent the day we arrived. We were treated as if we had come to pull Flint from the depths. The hospital staff were briefed not to ask anything about our personal lives, not even our last names. Hospital admin had done an amazing job of boosting our mystique. Our black scrubs helped too… But what really paid off for us was our training. 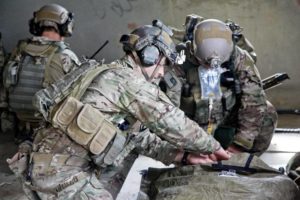 Before you go to Flint, it’s well worth studying the American Heart Association’s Rapid STEMI Identification course because a large number of the calls you will respond to on the paramedic part of your clinical rotation will be cardiac. Understand what is meant by ‘reciprocal changes’ on an ECG. Refresh yourself on your ACLS drugs and cardiac rhythms. Flint is an amazing opportunity and a perfect end to the grueling 10-month SOCM course.

One of the incidents I remember most clearly from Flint was being called to the scene of a 5-year-old girl with Croup. It was the first time I’d actually heard that ‘seal-like bark’ they refer to when describing the cough of someone with Croup. It’s very distinct. There was already a civilian paramedic at the scene and two other SOCM medics. We made the mistake of trying to meliorate the patient on the scene. A hot bath was run and one of the medic’s sat in the bathroom with the child on his lap so she could inhale some of the moist air (this is one way to treat the symptoms of Croup). Meanwhile the civilian paramedic spent some time trying to find out the correct dose of racemic epinephrine to administer to the child via nebulizer, then gain consent from Med Control to administer it. Really, what this child needed was ‘bright lights and gasoline’. She needed to be transported to higher care urgently, but we stayed on the scene for what seemed like 10-minutes trying to provide some care for her before transporting. That was wrong. And you may find yourself in a similar situation. Learn from your mistakes. The child was fine, but she needlessly underwent 10-minutes of various medics trying to help her at the scene when the best treatment would have been rapid transportation.

I would encourage you to keep a journal during your clinical rotation and indeed throughout SOCM. Your experiences may prove invaluable to other Rangers going through the SOCM pipeline. It’s crucial that we help our brothers out. Keep online notes and keep track of your study material then ensure you pass it on.

The very last hurdle you will have to face is the Advanced Tactical Practitioner (ATP) exam. This is a USOCOM test (not a schoolhouse test) where an external proctor will come in and administer the exam. It’s 100 questions and it’s an open-book exam (you are given a copy of TMEPs, but you are not allowed to bring your own copy in because yours will be packed with your own annotations). You won’t find out if you passed the ATP until towards the end of your clinical rotation, but you can find out earlier if you email them and politely request your test results.

Your ATP is your license to practice as a SOCM medic. Once you graduate you’ll have your Enlisted Record Brief (ERB) updated to include your Whiskey-1 (W1) Additional Skills Identifier (ASI). You have to renew your ATP every two-years to keep it active. This is done through a short refresher course back at the schoolhouse. You’ll also have to either extend or re-up to meet the required 26-months you need to give Regiment upon graduating SOCM. Usually this will only require you to extend for a few months if you haven’t recylcled more than one block and have transitioned fairly smoothly through all the various schools prior to SOCM.

Note, when you get to Regiment almost all of your tactical protocols will come from the Ranger Medic Handbook. So, be flexible as TMEPs and the schoolhouse teach things slightly differently than Regiment. If you take leave to PCS between Bragg and Regiment, that would be a good opportunity to look over your Ranger Medic Handbook – I’d just enjoy your leave though, you’ll have earned it! RLTW!