This article originally appeared in ArmyRanger.com and is reposted here with the permission of the original author.  First re-posted in The Havok Journal on 27 March 2014.

I graduated the Special Operations Combat Medic (SOCM) program in June 2013 as part of my pipeline to become a Ranger Medic. This is a condensed evaluation of the course to give any other Rangers an insight into what to expect. Although the program constantly undergoes changes to make it more effective, the core components have remained fairly consistent throughout the course’s history. The biggest change to date is the recent addition of the 6-week Tactical Combat Casualty Care block after Combat Trauma Management. The addition of this block was intended to be a ‘putting it all together’ block of instruction and the feedback most of the cadre gave me is that it is an improvement on the old course.

Prior to attending SOCM, Rangers will have already completed Basic Combat Training (BCT), Advanced Individual Training (AIT) at Fort Sam Houston to obtain their 68-Whiskey Military Occupational Speciality (MOS) and Airborne School at Fort Benning. These blocks of training were not physically demanding or particularly mentally challenging – but I consider them one of the most difficult times of my entire training for those very reasons: the general lack of ‘a sense of purpose’.

BCT is a check-box to joining the military. AIT is a dummied down version of being a civilian First Responder. Airborne School is a 3-week school that could have been taught in 3-days. Welcome to Big Army… lots of waiting around, wasting man hours, killing time doing ‘area beautification’ (picking up dead leaves and cigarette butts), 5 formations a day and the claustrophobic rules of the U.S. Army Training and Doctrine Command (TRADOC). 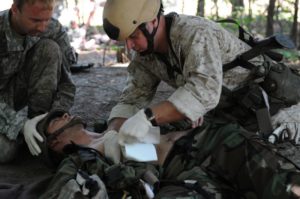 You can’t go anywhere without a ‘battle buddy’ and are generally treated like a grown child. This was especially difficult for me, as I was 38-years-old when I enlisted (I’m 40-years-old now) and had walked away from a good civilian career as a Registered Nurse.

I make this point because there’s a misconception that Special Operations is going to be hard. It is, but it’s a challenge with a purpose and as such it’s very rewarding. Its unlike the Regular Army which can be so purpose-less that it’s challenging in a very different way. Enough said.

After Airborne School you’ll go to RASP. There’s enough posts on ArmyRanger.com to evaluate RASP, so I won’t go into it here. As another Ranger said to me, “It’s nothing a real man can’t do.” and of course, “Never quit”.

Pre-SOCM is a different environment entirely. Up until now your experience in the military will have been almost exclusively physical. Now you have to switch gears and become the academic. It’s important to understand that as a SOCM you are considered a mid-level provider, because of the often austere and remote environments in which you will operate your scope of practice is comparable to a Nurse Practitioner or a Physician’s Assistant. Pre-SOCM is going to be your first introduction into that steep learning curve that really never ends.

Many people can’t make that transition and decide here that being a Ranger Medic isn’t for them. The Pre-SOCM program itself has undergone many transitions. It used to include a 6-week civilian college course in physiology & anatomy at Columbus State University (CSU), just outside Fort Benning. However, that died when the Army began making budget cuts and cinched the purse strings on their Tuition Assistance. The loss of the program is a real tragedy. The three SOCM classes ahead of mine had an almost 100% pass rate for Rangers and in no small part the CSU course at Pre-SOCM set those Rangers up for success.

The classes behind my graduating class did not have the luxury of the CSU course and it’s more than coincidence that there attrition rate is much higher because of it. Now, instead of the CSU course preSOCM Rangers are sent to obtain their Expert Field Medical Badge (EFMB). The EFMB is definitely going to help you, but what you learn there is not going to be put into practice until towards the end of the SOCM program and unfortunately, as many medical skills are perishable, you may find you’ve ‘brain-dumped’ a lot of what you learnt by the time you get to the end of SOCM.

Editors Note: Since the time this article was originally posted, Pre-SOCM students have returned to taking classes at CSU. At a minimum, they attend Biology and Anatomy & Physiology (Both semester long courses crammed into six weeks). Both classes must be passed with an 80% or higher, or the student will be RFS’d from the Regiment.