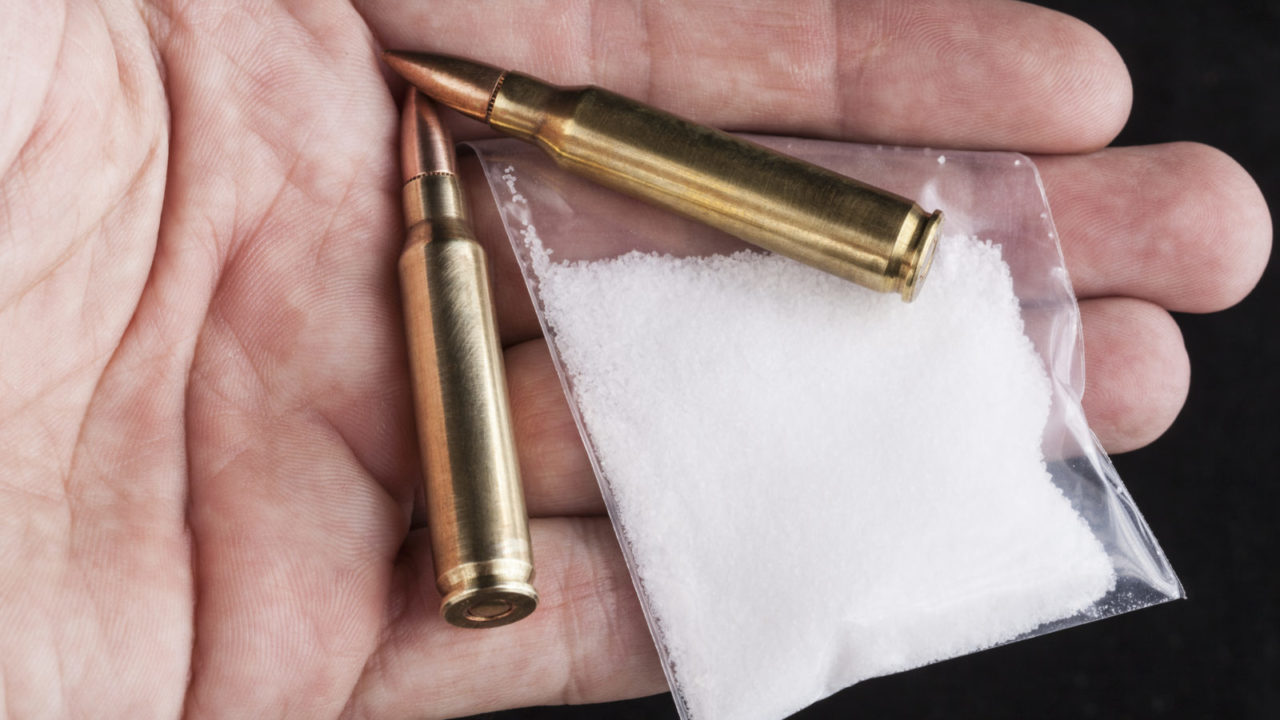 Daesh is full of fame whores. They live (or, rather, die) for the social media-friendly coverage of their attacks. They elbow their way to the forefront of our fears. Which is understandable.

But they still need money. We’ve heard how they use oil to finance themselves. We haven’t heard as much about how they traffic narcotics for income.

Roughly 90% of the world’s opium poppies comes from Afghanistan where US/Afghan government eradication efforts have driven poppy growers into Taliban-controlled areas. Consequently, the Taliban has benefited from the protection racket — levying taxes on the poppy growers while also shepherding their product to Chinese, Tajik, Turkish or Russian mafia elements for distribution. The Taliban doesn’t work alone, though. Drug money is a flame that draws a lot of moths…moths like al-Qaeda and Daesh. What, did you think they just liked Afghanistan for its topography?

For the past 18 years, unless you were part of the druggie elite, you weren’t doing the good Afghan stuff, which mostly ended up in the Far East and Europe. For years, most heroin users in the US were just getting by with cheap, synthetic stuff made in Mexico or Colombia.

That may be changing.

Al-Qaeda has existed in the lawless Tri-Border Area of Brazil, Paraguay and Argentina for years. (I don’t say lawless casually — it’s kind of like this place.) But now, Al-Qaeda is also making itself comfortable in Brazil and al-Qaeda’s resurgence in Afghanistan only strengthens its drug connections both on the production and distribution ends.  Either via smack or bombs, al-Qaeda would like to kill you. Of course, since the smack goes towards funding the bombs, maybe there’s something we can do to interrupt their OODA loop. More on that in a few paragraphs. Because, as titillating as Sunni extremism is, we’ve got to worry about Shia terrorists too.

Most Shia terror traces back to Iran, whose sponsorship of terrorism continues unabated (to say nothing of the terror that Iran itself inflicts). And now, newly empowered Iran accelerates, virtually unimpeded, towards realizing its nuclear ambitions. Oh, and its burgeoning partnership with Russia is already doing wonders in Syria.

Unlike Daesh who seems to prize locally radicalized, social media-friendly active shooter attacks, Iran presents a more multifaceted ability to strike the US — and, sometimes, from just as close.

How close? About as far away as your next line of coke.

Historically, Iran’s strongest relationship in Latin America has been with Venezuela. Under former President Hugo Chavez, Venezuela served as Iran’s gateway to the underbelly of Latin America, particularly the Chavez-created Continental Bolivarian Movement — an organization designed to coordinate Latin American terror groups. This was the start of a beautiful friendship — an alignment of left-wing nation states and terror groups against, ultimately, the US.

Of course, partnering with terror groups was hardly new for Iran, which had used Hezbollah as its proxy army for years. And Hezbollah, like al-Qaeda, was already operating in the Tri-Border Area.

But as Iran cemented its relationship with Venezuela, Hezbollah expanded its role in Latin America by adding the cocaine trade to its portfolio. Playing the role of drug enforcer, Hezbollah ensured the safe passage of cocaine from Columbia to Venezuela (where it could be shipped to Africa and Europe). Fast-forward a few years and the cocaine trade is now considered a substantial source of Hezbollah’s funding. Even with Venezuela’s fragile economy, there is no reason to think that will change in the near future: Venezuela has continued the Chavez-era practice of offering national identity cards to Hezbollah, thereby granting them the protection of a nation state.

But moving into the cocaine trade did something else for Hezbollah (and, therefore, Iran). It connected them to the drug cartels, specifically Los Zetas — the bloodthirsty cartel made up of former Mexican special forces troops — cementing a savage narco-terror connection. You may remember that, in 2011, Iran’s Quds Force planned to use the Zetas to kill the Saudi Ambassador to the US when he went out to dinner in northern Virginia. It was the kind of audacious plan that caught the eye of most media outlets. Because the attack was thwarted, it was easy to forget that the bombing constituted only part of the plans Quds Force had for Los Zetas — Iran also planned to use the Zetas to set up trafficking routes to import Afghan heroin into the US.  (It also wanted to use the Zetas to bomb the Israeli Embassy in Washington as well as the Saudi and Israeli embassies in Argentina, if you’re keeping score.)

This year, Iranian President Hassan Rouhani signed an economic cooperation agreement with Venezuela and declared relations with Brazil a “top priority.” Cuba has deployed military “advisors” to Syria to assist Iran. In short, Iran’s ties to Latin America (and, by extension, its drug trade) are growing stronger and more intractable. What plans does a newly enfranchised Iran have for its proxies in Hezbollah and the Zetas?

Why wait to find out?  Why not disrupt the jihadists’ narco-terror connections at their source — us? We know that attacking the supply of hard drugs is like damming a river with a set of steak knives, so why not target our insatiable demand? Americans are infatuated with living in socially conscious ways. We protest Walmart because of their wages. We shop at Whole Foods because they’re organic. We protest Nike for using sweatshops. So why was Nancy Reagan the last person willing to mobilize us against the drugs at the root of so much poverty, death, and violence both here and abroad?

Why can’t the drug trade be as stigmatized as Charlie Sheen? As lampooned as Donald Trump? Where are the ladies of The View? Where is Saturday Night Live? Where is Harvey Levin? Let’s teach Daesh and Iran a lesson about the power of America’s pop culture messaging. Stop terror. Boycott drugs.

This first appeared in The Havok Journal on December 10, 2015.