Well, that makes two of us. 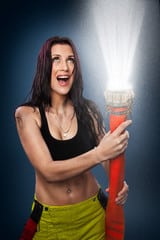 In the latest installment of “why would you do that?,” two Ohio firefighters were suspended last month after a pornographic video surfaced that appears to show the couple engaged in sex acts at the firehouse where they worked.

The video, which was reportedly shared on numerous Internet sites (no, we didn’t watch it and no, we’re not going to try to link to it), is alleged to begin by showing the female half of the pair in question naked and working out on the fire station’s gym equipment (ew!).

-Wipe down public gym equipment BEFORE you use it because you never know what was done to it (or on it) before you got there.

-Army privates aren’t the only ones who will do God-knows-what when left unsupervised.