HomeNationVeteransThe Mark of Those Lost, and Those Left Behind 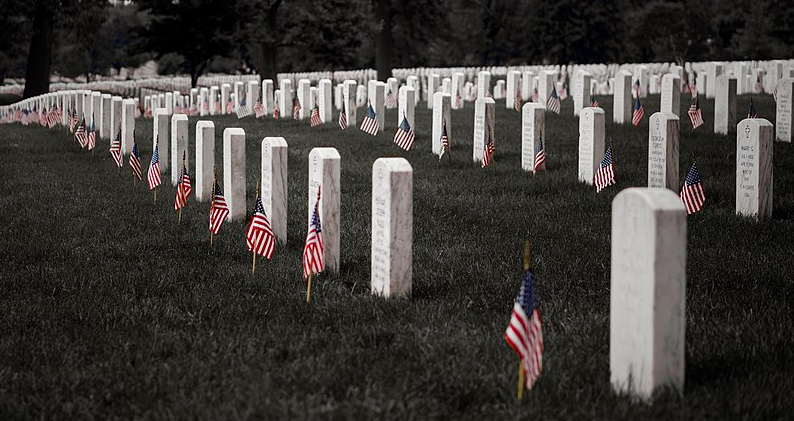 I was on a plane into Dulles after 911. When the plane approached the gate, the captain made an announcement. “Please remain seated as we are carrying a fallen soldier on board in our hold.” It was a chilling reminder that we were at war. The plane was silent and respectful. You didn’t have to agree with the war, but everyone on board understood the sacrifice. We were landing at the capital. Most likely, the soldier’s body was on the way to Arlington or Annapolis. An honor guard met the flag-draped coffin. A life cut short. A soldier that made the ultimate sacrifice on his final trip home.

This is what Memorial Day is about. It’s not Veterans Day. It’s not celebrating those who made it back. It’s about those who didn’t. Some facing death head-on. Others, a victim of chance. These are a few reflections I have from my family and friends that keep Memorial Day sacred.

When I started writing this, it reminded me of a moment in time when my great uncle stood at my grandmother’s coffin and told us about a moment in World War II when he felt death was walking with him. My uncle never talked about World War II, but as he stood above my grandmother’s casket he started telling us about December 16th, 1944. He was in his cot, and his sergeant threw open the flap of his tent in the middle of winter.

“Let’s go. Move it. Move it.” My uncle described the disarray of war as men we’re given a few rounds, some of them didn’t even have their boots on, and they were sent to bolster the lines as the Germans began a massive counter-attack.

He said, “Some of the guys didn’t have socks, shoes, or jackets. They just needed men out there. The command figured they could find what they need from anyone they found that was dead. I thought I was going to die. As I got on the truck, I was pulled aside and told to report to the command tent. I could type. They knew I could type well, and I typed up reports of the war dead.”

A small skill, a twist of fate saved my great uncle who went on to become a Federal Judge after the war. What always stuck with me was that he felt guilty about not riding in that truck and meeting the Germans head-on, even though he felt it would be his last night on earth. Later that evening, my dad said then John Paul never talked about World War II. He never knew about what happened to John Paul at the Battle of the Bulge. My dad said it was a special moment. He was right. It stuck with all of us that night that John Paul carried this guilt all his life.

Two weeks before my brother’s deployment in Iraq, our neighbor lost their son to an Iraqi sniper in Baqubah. Sam and Mary knew my brother was about to be deployed and we spoke about it while we went to their house to pay our respects. At this point, I didn’t know my brother’s unit would relieve their son’s unit in Iraq. Sam mentioned he was only two weeks from coming home. Two weeks from finishing his tour. They were hurt inside, but they were proud of their son.

It was in our conversation I realized my brother’s unit was going to Iraq to relieve their son’s unit. A few weeks later, that could have been my brother. A few weeks later, Sam and Mary may have been at my house. Many of my friends have similar stories. Some of them are my battle buddies today. Some of them, as men and women have survivor’s guilt driving them into depression, painting pictures in their heads at night and waking them in cold sweats as they relive a moment in time when it could have been them.

My final reflection comes from my high school physics teacher Lt. Colonel Jerry Easterling who served in Korea and Vietnam. He said,” As an officer, you make decisions. You take orders and you order men. There are times, you must order your men to take a hill or other position knowing you are sending them to their deaths. Matt, we do things in war knowing the outcomes. When you lead, sometimes, you do things you don’t want to do. It’s part of being a leader. Sometimes you’re ordering your men to make the ultimate sacrifice.”

Every Memorial Day, we watched war movies in Mr. Easterling’s class. We had a moment of silence. When I went to Lt. Colonel Easterling’s funeral a few months after this conversation, the conversation stuck with me. War is shitty. At some point, someone makes a call knowing they’re sending men and women to their death for an objective. The amazing thing is that these soldiers go knowingly. Not for themselves, but for their brothers and sisters.

We call them a band of brothers because at some point the guy you shared a fox hole with, the friend you made in basic, the guy who mentored you as a private made a sacrifice only a family member makes. When you’re the first to storm a building or a beachhead, you’re not doing it for you, you’re doing it for your brothers and sisters. Like any family, when you watch a brother or sister die to save your life, it makes an impact.

If you were just in the fox hole that got hit by a mortar as you look in dismay knowing minutes ago, you were there, with your friends eating an MRE. You live with that. When Memorial Day comes, it’s not about you. It’s about your friend, your mentors, your brothers and sisters that didn’t come back. That may have been hit with dumb luck or may have knowingly jumped on a grenade to save you. It’s shit you live with.

It’s a burden for many to know “I made it.” Some people crumble, some people rise, but anyone that’s lost a friend in combat is changed. You may have a friend or family member that served, who gets a little quiet on Memorial Day. For them, it’s a day that brings back a rush of memories. It’s a day that serves as a marker in their lives. If you lost a loved one, this is your day too. It’s a day to remember that war is not pretty, it’s not something to take lightly, and it always leaves a mark on those lost and those left behind as well as those taken too soon.

Matt is a Director of Product Management for a leading mobile platform enablement company. He has traveled extensively in the United States and overseas for business and travel. His travels include India, Mexico, Europe, and Japan where he was an active blogger immediately following the Kaimashi quake. Matt enjoys spending time outdoors and capturing the world through the lens of his Nikon D90. He enjoys researching the political, economic, and historical influences of the places he visits in the world, and he commonly blogs about these experiences. Matt received a Bachelor in Computer Science at Mercer University, and is a noted speaker on innovation, holding over 150 patents. His remaining time is spent with his family going from soccer game to soccer game on the weekends.