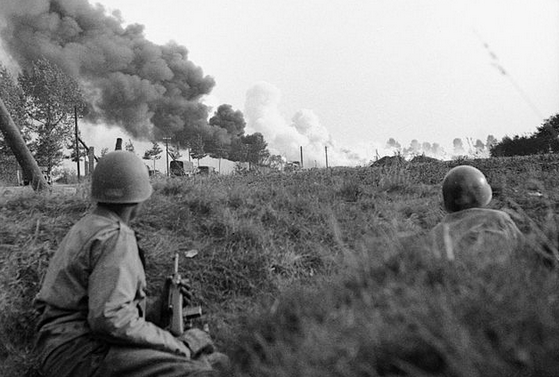 When soldiers are asked why they volunteered for the paratroopers, their responses come in many forms. Many men signed up to be in the Airborne because they possessed a desire to fight for their country after the attacks on Pearl Harbor.[1] Many believed it was their patriotic duty.[2]Family was another reason. There were those who had relatives in WWI and figured that it was their time to serve; then there were others who already had a brother or friends that had enlisted in the unit.[3] There were some who signed up simply because they planned on serving and wanted the extra jump pay. While others shared the same sentiments, they also figured if they were going to sign up for something, they might as well join the best the Army had to offer.

Donald Malarkey, a member of the famous “Easy Company” of the 506thParachute Infantry Regiment, said that he joined the paratroopers because he “wanted to be in a crack outfit in deference to the infantry.”[4] The men who became paratroopers sought out an elite unit that was fun, exciting, and adventurous.[5] While their intentions were clear, their future was not.

What made a lot of these soldiers special was not just their service, but the way they committed themselves. Many were known as “double volunteers.”[6] These men not only enlisted in the Army, instead of waiting to be drafted, but also joined the paratroopers on strictly a volunteer basis.  Charles Cram, a paratrooper in the 506thParachute Infantry Regiment (PIR), signed up to be in the Army even before his 18thbirthday. He recalled that when it came time for him to leave, his grandfather “was heartbroken . . . The way he saw it, if I waited to be drafted the war would be over before I got involved in any fighting. That’s what I was afraid of.”[7]  Cram served with the 101stAirborne, survived the harsh winter of ’44-’45, and endured sub-zero temperatures at the Battle of the Bulge.

Charles Cram was a valiant individual who suffered through his time in the Army, along with millions of others, taking everything the Germans could throw at him and what his leaders expected of him. Cram remembers his time in the paratroopers as bittersweet. He pointed out he was “extremely proud of [his] service.”[8] He continues to carry the memories of his time as a “double volunteer” in the Army. Sixty years after WWII, he adds that “[m]y fingers and toes are still numb from Bastogne,” serving as a constant reminder of his time as a selfless servant to his country. Cram’s story is typical of the men who unselfishly served in the ranks of the American Airborne.

The type of people in the Airborne units were the reasons why they were so successful as a fighting force. Edwin Sayre, a twenty-five-year-old sergeant in the Texas National Guard during WWII, gives an interesting perspective on what he thought of the Army after leaving his home in Texas, where his family owned a dairy farm. When he told his father he wanted to enlist in the Army, and after constant persistence, Edwin’s father finally let him go by telling him, “Go ahead, then, be a bum!”[9]

During basic training, “he felt as if he’d been given a vacation. The workday back on his father’s dairy farm . . . started at 3:00 A.M.  By the time the bugler blew reveille, turning the soldiers out for morning formation, Sayre’s parents and siblings had already been at work for two hours.”[10] After spending some time in the National Guard, the bombing of Pearl Harbor occurred, and Sayre decided it was time to take his Army career more seriously.

Sayre took a test that, because of the growing Army and a need for officers, allowed him to earn a pair of Second Lieutenant bars. He accomplished this by passing in the top 10% out of about 400 NCOs in the division who took the exam. Sayre tried to get transferred to be a part of the Airborne and go to jump school, but his direct chain of command would not allow him to go. After being denied, a friend that worked in the division headquarters called him and let him know that the division commander was out of town for the week and that if he submitted a new application, he would get it signed. His buddy was true to his word, and Sayre was soon on his way, hitchhiking to Fort Benning.[11]

Others found themselves in recruiters’ lines after 7 December 1941. Berge Avadanian, a twenty-three-year-old native of Massachusetts, had a great job as a manager trainer for Howard Johnson restaurants. At work, after pausing to listen to the “day that will live in infamy” speech by President Franklin D. Roosevelt, Avadanian left his job and drove his company car down to the first recruiting station he could find in lower Manhattan. When Berge got there, he had to wait. This was because “the other young men were in the same mood he was in: they all wanted to do something, and they all wanted to do it right away . . . most of the men wanted to fight the Japanese . . . but Avadanian believed Hitler posed the bigger threat: his war would be in Europe, fighting the Germans.”[12]

Even with the bonus jump pay, Berge actually took a pay cut to join the paratroopers. He unselfishly answered his nation’s call.  Sayre and Avadanian were not alone, in fact, “tens of thousands of young men did exactly the same thing . . . they set aside their lives and stepped forward to volunteer.”[13] For Sayre and Avadanian, they left behind their jobs, one on a farm, the other as a trainer for restaurant managers.

Jobs were not the only thing some men left behind. Most of the men who went to Airborne units were young and single. However, while it was a requirement for those who joined the Parachute Test Platoon to have no dependents, the Airborne units activated later allowed married men to join their ranks.  Later, when the Airborne formed larger units, while married men were discouraged from signing up, they were not banned from joining.

After being drafted and going through basic training, Private First Class Homer T. Blake “volunteered for the paratroopers because it paid more.”[14] Blake recalled his family did not want him to go off to war, which was understandable, considering he left behind not only a wife but also a three-year-old daughter.[15] Blake was one of three men in his company to leave behind a spouse.[16]

Volunteers came in droves after Pearl Harbor. Those who not only raised their hand to serve but also volunteered for the Airborne knew they would soon face both tough training and harsh conditions in combat. As Don Malarkey pointed out, at least they would surround themselves with some of the best, men with similar drives.  They sacrificed years of their youth for their country and would exchange them for years of hardship and combat.

This first appeared in The Havok Journal on June 3, 2019.