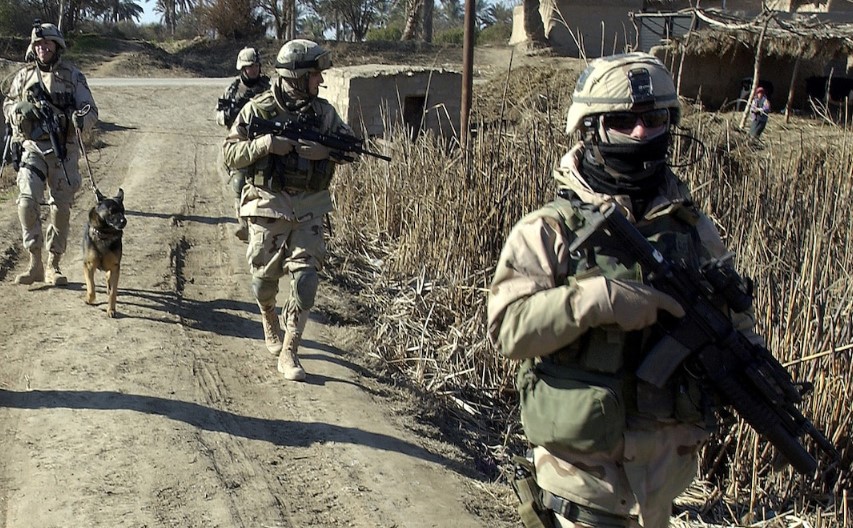 My son, Hans, went to war in July 2011. His unit was deployed to Iraq and was stationed near Baghdad. Hans got hurt while he was in Iraq, and he hurt a number of other people during his stay. Hans is a combat vet. For Hans, the war sometimes seems like it was a lifetime ago. Sometimes it seems like it was yesterday.

A couple of days ago, Hans shot me some texts. Apparently, Iraq seemed very close when he sent them to me.

He wrote, “I don’t know why I watch war documentaries. They always make me cry out of anger, just because we put ourselves in the shit and no one’s actually cared since WWII.”

Hans responded, “I miss war. If I wasn’t married and had kids, I would probably be in the Ukraine right now fighting for what I believe is right.”

He continued, “Me and my buddies believed we were helping the Middle [East] maybe just a little and then they pulled us out and see everything we did disappear WTF.”

“We just left them to rot in the fucked-up situation. We designed (started?) but never finalized and it’s just war again.”

“At least let the mission get finished. Fuck politicians, fuck media, fuck people’s opinions. We should have stayed there until we finished it.”

I told Hans, “Your family is your mission now.”

Then he went on, “A lot of Vietnam veterans I talk to feel the same.”

“It was just another political war over money.”

I didn’t know what else to say to Hans. I was in the Army, but I was never in a war.

Raising a family is not the same as fighting a war (usually). However, Hans’ overriding purpose in life is to care for his wife and three small children. That can be a great challenge. Caring for a family is a struggle that requires courage and determination, the same attributes Hans needed in combat. Being a father and a husband is not easy, but it is not all work and worry. There are moments of pure joy too.

Do other vets feel the way Hans does? I am sure of it. Other soldiers in other armies at other times felt like my son does. The German soldiers who fought for their Kaiser in the trenches during WWI felt like Hans does. I know an old man at the synagogue whose son fought with the Soviet Army in Afghanistan in the early 1980s. His son is the sole survivor of an IED explosion. The old man always tells me about what a brave soldier his son was. His boy (now my age) still struggles with his wartime experiences. He drinks endlessly to deal with his PTSD.

Will Hans’ kids go to war? Will they tell Hans the things that Hans tells me?

Why don’t we ever learn?

Frank (Francis) Pauc is a graduate of West Point, Class of 1980. He completed the Military Intelligent Basic Course at Fort Huachuca and then went to Flight School at Fort Rucker. Frank was stationed with the 3rd Armor Division in West Germany at Fliegerhorst Airfield from December 1981 to January 1985. He flew Hueys and Black Hawks and was next assigned to the 7th Infantry Division at Fort Ord, CA. He got the hell out of the Army in August 1986.