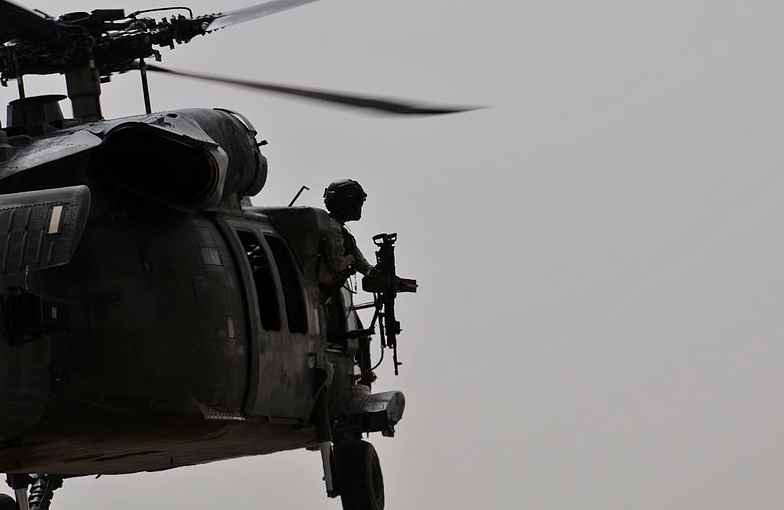 This first appeared in Frank’s blog on May 2, 2022. It is republished here with the author’s permission.

I have a friend who is an Afghan refugee. He and his family fled Kabul shortly before the city fell to the Taliban. They are safe now in another country thousands of miles away from their homeland. My friend was trained by the United States to be a helicopter pilot, which explains his abrupt departure from Afghanistan. Recently, he sent me a photo of himself sitting in the cockpit of an aircraft. He is wearing his reflector shades, so he is barely recognizable in the picture. I think he intended it to be that way.

I decided to return the favor. I dug through my archives and found a black and white photo of my flight platoon when I was stationed in West Germany back in the early 1980s. The picture is four decades years old, and I sent a copy to my friend, asking him if he could pick me out of the lineup. I haven’t heard back from him yet.

Go ahead and look at it. I’ve been looking at it, and I’ve been remembering.

There is no date on the picture. I am guessing it is from late 1982 or the beginning of 1983. That’s forty years ago. The Black Hawk in the background must have been brand new at the time. Our unit was transitioning from Hueys to Black Hawks at the time. We were also transitioning from a Corps level unit to an aviation company belonging to the 3rd Armored Division. Our equipment was changing, and our mission was changing. Everything was changing.

On a global scale, things were in flux. Brezhnev died about that time and the Soviet Union was in the midst of a leadership struggle. Reagan was ranting about the “Evil Empire”. The Cold War was very real. We were all waiting for Armageddon to start.

I was section leader in my platoon. I think that I had just become a 1st lieutenant. I never really understood my duties as a section leader. I don’t think anyone else did either. I was kind of superfluous. If I had questions, I was told to look in the unit’s SOP. The book of the SOP (standard operating procedures) was usually either missing and/or being revised. There wasn’t any kind of mentoring system as far as I could tell. I was on my own, so I drifted.

The Army at that time was trying to reinvent itself. There was still a hangover from the Vietnam years. The military was slowly purging itself from the drugs and the low morale. The Army was now a volunteer force, and nobody seemed to know how to deal with that. There were more women in the Army and more minorities. Sexism and racism had to be confronted somehow. Oh, and it was also peacetime, albeit an edgy sort of peace. What does an army do during peacetime? What was the mission?

My commander had a poster in his office from Afghanistan. He was a big fan of the Muhajideen. I think he had actually been in Afghanistan briefly. That was back when the Soviets were in that country, and we were rooting for the Muslim insurgents to drive out the invaders. It seems ironic now.

God, I was a fucking idiot during that time. I was bored. I had a purpose when I was flying on a mission, but otherwise, I was just looking for something to do. I hung out with the pilots. Sometimes we trained. Sometimes we just killed time. In my free time I got drunk… a lot.

I am surprised that I didn’t get into any serious trouble. I was certainly looking for it. I remember going to the red-light district in Frankfurt with a couple of guys on Christmas Eve. We went to some brothel. Even now, the memory of that night depresses me. We got the come-on from the whores. It was all a sales pitch. It was sex without love, purely a business transaction. One of the guys made a purchase. I didn’t. It was profoundly disturbing.

I was intensely lonely. It was difficult to connect with the other people in the unit, mostly because it was a transient population. People were constantly coming and going. By the time I could make a friend, they were getting ready to make a PCS (permanent change of station). Most of the people in the photo were to a large extent strangers to me. I don’t remember their names, and I doubt that they remember mine. There are two pilots in the picture who I still count as friends. Even after all these years, we still stay in contact. I am grateful for that.

I didn’t know German well enough at that time to feel at all comfortable among the locals. I rented an apartment from an elderly German couple. I used to drink with the old man. He showed me pictures from his youth. I remember one photo of him smiling. He was in his uniform with a swastika armband. That guy had been a Nazi, a real one. Most of the time, it seemed that I wandered through German towns alone. Even when I was in a crowd, I was alone. Ever since that time, I have felt deep sympathy for migrants. It is hard to be among strangers in a strange land.

The German locals had a schizophrenic attitude toward the Americans (the Amis). They tolerated the American troops. The Germans made money off the GIs, but they really didn’t want them around. The Germans from my generation were often leftwing pacifists, and they considered us to be an occupying force. In a way they were right. We had been on their turf for almost forty years at that time, and we weren’t leaving. I remember seeing graffiti on a brick wall in Hanau that said,

I enjoyed it when we had interoperability exercises with our sister unit from the Bundeswehr. We used to fly with them when we still had the Hueys. It was through the guys in the Fliegende 301 in Niederstetten that I met my future wife. How I met Karin is a long story, and I won’t go into it here. It’s odd. I seldom had a strong relationship with my American comrades, but the Germans pilots took care of me.

I look at the photo and I find it difficult to recognize myself. Who was I then?

That was another life.