A while back, I had a link from some Facebook page called “Upworthy” grace my news feed, with a catchy title about a hotly contested topic. I don’t remember exactly what it was now, but I remember it made me think, wow, these guys really get that it’s not about the party line but rather common sense. Their mission of drawing attention to ‘things that matter’ really appealed to me. How could you not be excited about a media outlet with a positive message? So, I ‘liked’ their page, and occasionally read their articles. I didn’t agree with everything, but as I like to say about The Havok Journal, if you agree with every article we put out – we are doing something wrong. Sure, they had a bit of a liberal bias, and I tend to be just right of center, but I could appreciate some of the topics they were bringing attention to.

Then the page grew. It became more popular. It went from receiving a hundred comments on an article, to drawing in thousands. They started to receive media attention, and grab the attention of the disgruntled youth. They started to go even more left. They started to take political stances. Then, and this is the worst of all, they devolved into nothing more than emotionally charged, click-bait headlines. I’m sorry, but how can you take a headline like, If you don’t let your partner do this in the bedroom, you might as well break up with them now seriously? On top of that, they started to attract some of the most rabid, unrelentingly-rigid-in-their-views, radical fans in the world.

So, having become fed up with their newfound modus operandi, I decided I would conduct a little experiment to see just how bad things had become on their page. Upworthy prides itself on their acceptance of all and most of their fans will claim the same. It turns out that they really don’t like it when someone disagrees with them though, as I found out when I commented on one of their posts about breast feeding in public. For the record, breast feeding in public is a non-issue for me. I rarely ever see it happening, and I have much better things to worry about then where and how someone chooses to feed their baby. My comment on Upworthy’s post was more to gauge their audience’s reaction then anything: 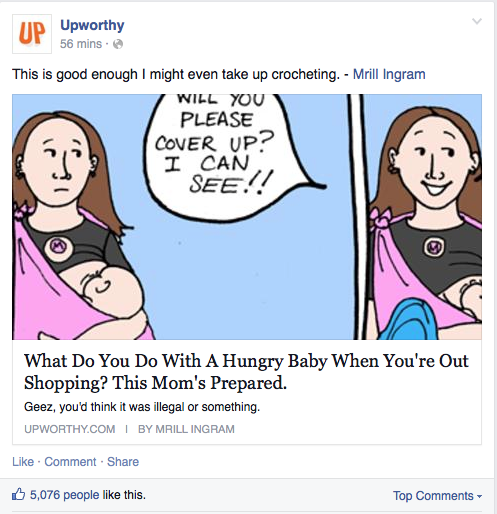 But then the comments  started rolling in. A lot of them. For such a self-proclaimed tolerant group of people, I received some pretty intolerant replies. I couldn’t help but think how disappointing it was that Upworthy had devolved into… this.

So, I came to the conclusion that even if they do draw attention to some really good things, their efforts are overshadowed by their click-bait titles, their articles that are based off of emotion and not logic, and the large part of their audience that is absolutely blood thirsty for anyone who does not agree with them. I mean, how can you claim to be so much more tolerant than those privileged rich white guys, when you vehemently attack anyone who doesn’t absolutely agree with you? It’s a shame, really. They had a chance to really reach out across the divide that has formed in America to spread a truly positive, dare I say upworthy, message. Instead, they rallied their “side”, and pandered to the Idiocracy style of media that has become so acceptable today.

Then again, maybe I’m not with the times. Maybe I am just a war mongering, disgruntled, 27-year-old, check your privilege, white male. Maybe America has moved past the ability to hear another’s point of view with out adopting it themselves. Maybe I should have titled this article, I trolled an Upworthy article, You Won’t Believe What Happened Next.

havokjournal@blacksideconcepts.com
Havok Journal welcomes re-posting of our original content when it is done in compliance with our Terms of Use