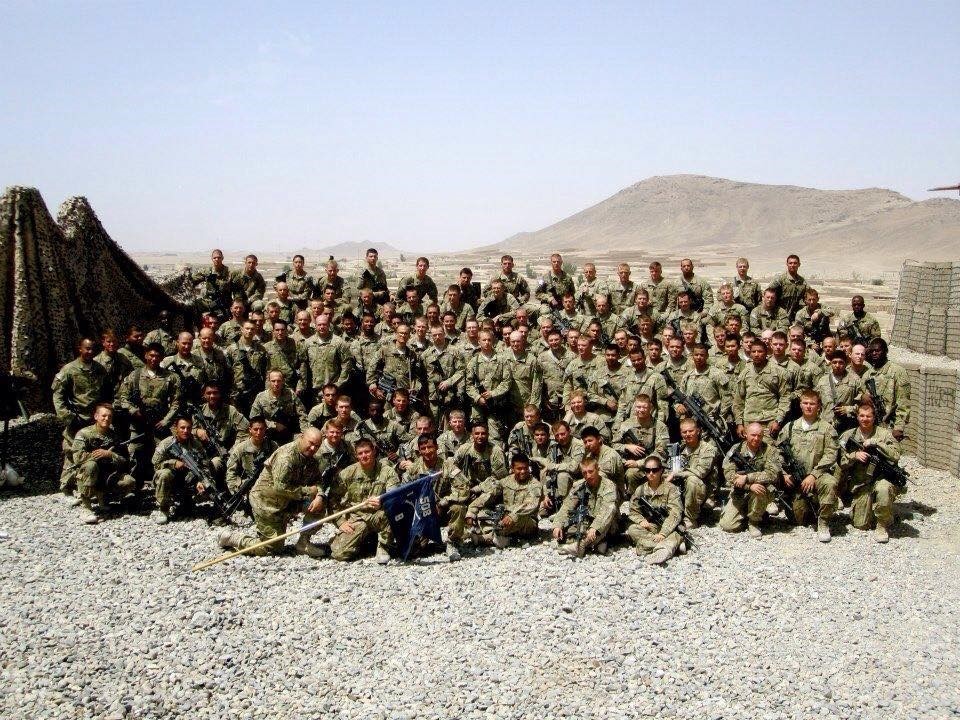 To my left in this photo, just above my company guidon is a man who loves and believes in America.  He loves America so much, he had the courage to do what many Americans never have: serve the United States in combat.  In fact, because he loves what our great country stands for, he served our country in combat for almost six consecutive years. He’s been shot at and had more hand grenades and IEDs blow up near him than most members of our military. He’s received death threats in meetings, over the phone, and constantly worries about whether his family will survive because of his actions to assist the US and our military.

For seven months in 2012, I commanded a company team of over 150 US Paratroopers partnering with 340 Afghan Security Force officers.  We operated in a town of over 10,000 people in an area that in the previous year averaged at least one act of violence by the enemy every single day. This was a wicked problem. We experienced a steep learning curve coming in. I needed a trusted ally to assist me in making life or death decisions in a tough fight against the Taliban in Afghanistan. During my deployment, this man was my best friend. My paratroopers affectionately called him “Dave.” I called him my “shadow governor.” Dave was our company’s primary linguist and cultural advisor during the course of our deployment. He was there for me like he was for the four previous commanders who served in that area, and for the handful of others who came after me.

When I needed to settle a dispute, Dave was by my side. Two-day air assault to the Wild West? Dave was there. He was next to me for every round I fired, every indirect fire mission I authorized, and translated every important message I needed to get across in three different languages. He laughed with me during down times. He cried with me at memorials. He felt the gains and the losses. We broke bread on countless occasions. When we were away from our bunks, we sometimes even shared my poncho liner. To say he looked out for me and had my back would be an understatement.

When an elder of mine serving in the local police force was blown in half and had his lifeless body thrown into an uncleared field, Dave was the one that carried my rifle behind me while I walked around with rubber gloves to pick up the pieces. To me, he was an invaluable asset, to the US Government, he was worth about $750-900 a month based on his salary.

And what were the thanks our country gave this young man? Last summer, during the drawdown towards the “end of combat operations,” just prior to taking two weeks off to visit his family, we didn’t renew his contract. Instead, we revoked his base access and sent him packing. We used him until we no longer needed him, and then we cut him loose.

With only $3000 saved up, Dave went back to his family that he still needed to provide for. In the past year, the death threats haven’t stopped. He moved his family to a more remote area to keep them safe. He’s struggled to find a good job. You see, unless you were an Afghan fighting on either side of the conflict the past six years, you made a living in a profession just like any other husband and father that needed to provide for their families. But because he sacrificed his life and his future for us, he is now disadvantaged and merely trying to scrape by.

So what was in it for Dave? Well, we gave Dave hope. We dangled American citizenship in front of his face for his courage and language abilities. We offered a false promise to him that for his service to our country and military, we would give Dave and his family a better life and an opportunity to earn an immigrant visa to become American citizens.

In 2012, I made the decision to write the Department of State a letter to endorse Dave and in doing so, signed off on his packet for citizenship. For the past three years, while we listened to others bicker about illegal immigration and securing our borders, and allow over 11 million illegal immigrants to reside in our country, Dave has been patiently waiting his turn in a war zone.

I’d like to remind everyone that the fighting in Afghanistan continues. Not only that, for the past year the Islamic State has been taking hold in that country, with evil intentions and tentacles that have a reach further than most can imagine.[1] Every time I read about another car bomb going off or see an execution video of those who have “worked with or for Americans,” I worry about Dave.

Routinely over the past three years, I’ve emailed the State Department’s Embassy in Kabul inquiring about the status of his small family’s status. Initially, I received quick and personal responses. Things were moving along until last summer. Since then, his packet has been stuck on the same “step” and hasn’t changed since then. When inputting his case information, the website merely states: “Your visa case is currently undergoing necessary administrative processing. This processing can take several weeks.”  This status has not changed in over a year.

So my plea to you today is simple:  I’m enlisting you to help me SAVE DAVE and his family. Help me fulfill the promise we made him seven years ago that because of his impeccable service to our country, we would take care of him.  Dave, along with his family, including his wife and young son and daughter need your help. Help me raise a unified voice so others may hear that a man who served our country bravely can be afforded the right he’s earned to become a legal American citizen.

I’m asking you to simply click on the link below, contact your Congressman, and share this on as many social media venues as you possibly can. Please write, please share, and please help me #SaveDave.

Contact Your Congressman: This database includes the up-to-date citizen’s congressional directory for the 114th Congress. As of August 06, 2015 there are 540 electronic contact addresses (of which 539 are Web-based contact forms), and 540 home pages known for the 540 members of the 114th Congress. Traditional ground mail addresses are available for all current members of Congress.

To protect Dave and his family from any retribution from this post:  I have withheld his real name and did not post any pictures showing Dave’s entire face.  When contacting your Congressman and sharing his information, please use his family’s official State Department Immigration Visa numbers:  KBL2013511012 (Subcases 01-04) KBL