HomeNationContemporary AffairsSatire and Blood: Revisiting Another Attack On Those Who Dare To Draw Muhammad 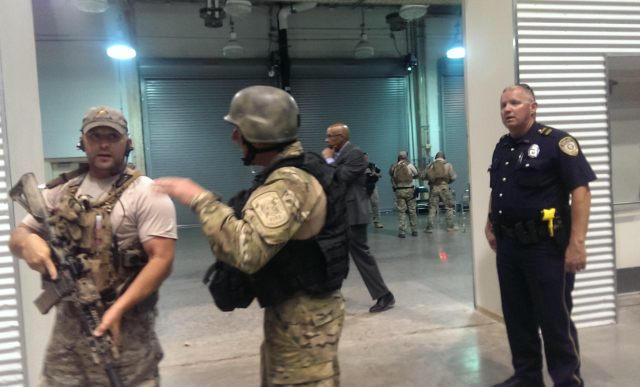 The first annual Muhammad Art Exhibit and Contest opened in Dallas to a sold out crowd . . . and two uninvited guests.

The event was hosted by Pamela Geller and the American Freedom Defense Initiative (AFDI).  The event was billed as a celebration of free speech, but the intent behind the event was to basically stick it in the eye of Muslims in general and those individuals who supported the attack on Charlie Hebdo in particular.  At the Exhibit, cartoonists would compete for the best cartoon satirizing the Prophet Muhammad and the winner would receive $10,000. 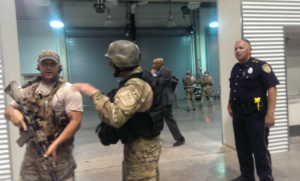 Understandably, AFDI invested heavily in security, with 40 officers (including many of whom who were reportedly SWAT) hired to work the event and provide security.  It was a good thing, too, since those two uninvited guests turned out to be armed.  In a series of events that is not yet clear, at least one officer was reported wounded by gunfire outside the venue.

The officer who was wounded is reported to be in good condition. The two gunmen? Not so much. Both of them were reportedly slain.  The scene is closed as the vehicle driven by the shooters is being checked for explosives.

There will be those who criticize Ms. Geller for her event. It is a well-known and often debated issue that those of the Islamic faith are notorious, infamous even, in their zealous protection of the memory and dignity of the Prophet. On more than one occasion, death has been the result of such irreverence.

The question becomes, do we limit freedom of speech to protect the sensibilities of those who don’t seem to have much of a sense of humor, or do we accept that with freedom comes controversy? In a nation where our symbol of freedom is almost routinely burned or defiled by her own citizens, do we not accept that this is just another case where the right to speech is protected regardless of who gets mad?

The answer is simple. Draw your cartoons. Award your prizes. Rejoice in living where you can do something that might cause controversy, but you’re protected in your right to self-expression.

This is about tolerance. It is about freedom. And it’s time Americans stop pandering to groups just because they might get mad. When Charlie Hebdo was attacked, there were those who said they deserved it, that they brought the attack upon themselves. Individuals, who claimed no Muslim connections, stated that one should respect the faith and the wishes of the faithful.

It does not work that way.

Respect is earned. If those who follow the teachings of Muhammad wish the world to respect their viewpoint, they need to try respecting everyone else’s as well.

Whether the cartoons were satire or not is irrelevant. Those individuals had the right to draw them and display them. The exhibition had the right to have a contest for them. America is about freedom. And if someone is free to burn my Flag, then these artist better be just as free to display their talents.

As of yet, there’s no information on who the assailants were or why they attacked. Perhaps they were attacking the police and it had nothing to do with the event itself. I have my doubts. While gunfire in Texas might be a common occurrence, using an AK-47 to shoot at a cop guarding an art exhibit is not usually a location you’d expect something like that to happen. I could be wrong.

Good money says it was some extremist or another who wanted to get their chance at heaven. And what better way than to die defending the Prophet? We will have to wait for more information.

Free speech is our greatest asset. I am using that freedom now and so are you. If we were to impose limits, we would once again be giving away a piece of ourselves for an ephemeral security that does not exist. One thing I know for sure? If you give something away, there’s no getting it back.

This article originally appeared in The Havok Journal on 04MAY15.