HomeNationBusinessREADYMAN: A Look Inside The Team Room 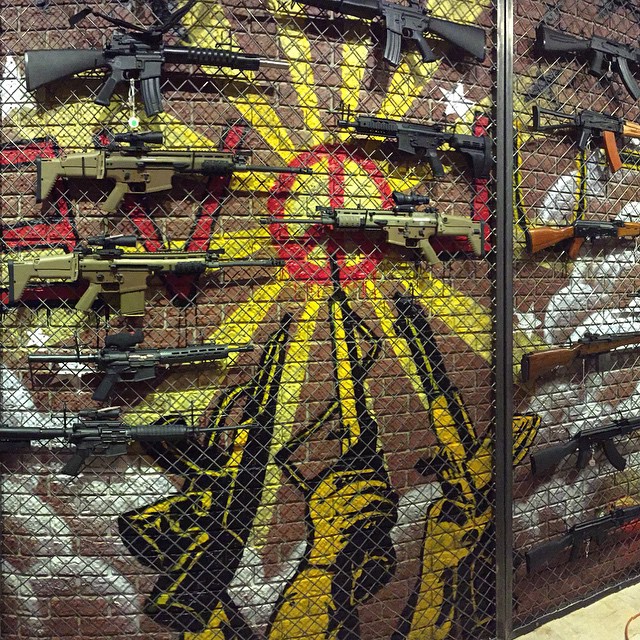 Batman has his Bat Cave, Superman has his Fortress of Solitude, and READYMAN has The Team Room. If you could conjure up your wildest mental image of where a bunch of former military guys would go to work every day… this is it. After having my breath taken away by the sweeping views of Salt Lake City and the surrounding mountains, I step through a set of double French doors into a massive 1500 square foot room with 20-foot ceilings. 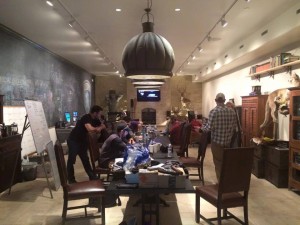 The entire left wall is a chalkboard that features a large hand-drawn READYMAN logo as well as notes on business strategy writ large, while the back wall features an impressive stone fireplace surrounded by statues of Greek gods and wild game trophies. Not even two feet into the room, I look down to my right and see an industrial sewing table/machine, with a tricked out AR-15 nonchalantly resting on it. Looking back up, I notice that I am staring directly into the eyes of a giant trophy elk whose rack towers over me like the branches of a tree.

Already impressed despite the fact that I have only taken a mere few steps into the room, I continue to survey the space which includes a ten foot long, fully stocked liquor bar, a beautiful mountain lion trophy, a large conference table surrounded by leather chairs, an antique Japanese crew served machine gun, and what looks like an opening into… yep… a massive arms room that would make most infantry company arms rooms blush in comparison of both quality and quantity.

As impressive as The Team Room is, what’s even more impressive are the people seated around the conference table. A collection of current and former military folks – to include veterans of both the SOF and intelligence communities, inner mixed with “civilians” who one can only assume are the best in their respective fields; READYMAN can claim to be one of the most impressively staffed companies in this industry.

What exactly is their industry? It really is all in the name. They aim to make every man (and woman) someone who is ready for anything by taking cues from varies other niches that include survivalists, the tactical shooting industry, the physical fitness industry, “Preppers,” hunters and fishers, and home defense. Guys like Evan Hafer and Jeff Kirkham, who are both currently part-time Green Berets and the authors of the Combat Field Leaders Guide (14th Ed.), use their extensive experience to produce engaging online content that teaches as well as informs their audience, and drives them to become one of the nearly 4,000 (and growing) subscribing members of the site.

Jeff Kirkham, who is involved in product development and firearms training for READYMAN, wants to give every one of those subscribers the tools to succeed, ”Is this something that I would use? Is this something that I would actually carry? A real survival item is something that you can have on you and forget about, but will work when you need it.” They are clearly staying true to that intent with some of their most recent break out products, such as the “Wilderness Survival Card,” which is constructed of stainless steal and has easy punch out tools that include a saw, fish hooks, and arrowheads – among other things. You can stick it in your wallet and forget about it, but if the conditions arise that might necessitate it’s use, you have it ready to go in the amount of time it takes you to pull your wallet out of your back pocket.

New and exciting pieces of gear like the Wilderness Survival Card are swiftly breaking down barriers of entry into the 120 billion dollar outdoor recreation product market. It’s not an easy task, especially since many consumers in this demographic stay fairly loyal to their already tried and trusted brands. Not to be discouraged, READYMAN has moved in front of the camera to demonstrate exactly why their products and techniques are better than their competitors. With a beautiful mountain back drop in most of their videos, any consumer who values instruction tempered by years of experience will be pleasantly surprised with the content on both their YouTube channel as well as their Facebook page. Educating their subscribers is after all, one of READYMAN’s main missions.

Jason Ross, founder of READYMAN, has a very specific vision for what he wants a “Ready Man” to be. “We want them to be competent outdoorsman (and women), able to shoot and move, and well equipped with quality gear.” It seems simple enough, right? Not really. Jason went on to explain how difficult it is to take someone who has grown up hunting or sport shooting, and introducing the element of movement into that task. Remembering when I was a young 19-year-old Ranger candidate who had grown up hunting the open prairie and farm fields of South Dakota, but having never actually fired a weapon without first stopping, I can absolutely appreciate the challenge inherent in instructing that task.

The deck is stacked in their favor though. Evan Hafer, one of the primary instructors for READYMAN, is considered one of the leading experts on pistol instruction in the United States. He literally wrote the book on it for the U.S. governments most elite high threat protection unit, and also spent many years selecting and instructing operators for high risk, covert government assignments around the world. When it comes to someone who understands what it’s like to operate in less than desirable situations, and can effectively relay that knowledge to others, you would be hard pressed to find someone better at it than Evan. It’s access to people like him that makes READYMAN so unique. Where else can you go and learn from someone with that kind of resume?

In a world where terrorism or natural disasters like Hurricane Katrina can strike at any time, leaving entire cities without food, water, or power; teaching these skills can literally be the difference between life and death. Although some may balk at the finer points of the prepper/survivalist culture, I would charge that it is everyone’s duty as a citizen to at least have basic first responder knowledge, know and practice basic self defense, and maintain at least a bare minimum level of physical fitness. Remember when terrorists struck the twin towers on September 11th, 2001? Those in downtown Manhattan had to run for blocks to escape the dust and falling pieces of building. Could you jog around a city block, right now, without stopping? Could you render basic first aid to someone if a car accident happened near you right now? Those might be hard questions to answer for some, but that is exactly why READYMAN has such an important mission.

This article first appeared in The Havok Journal on 12MAY15.