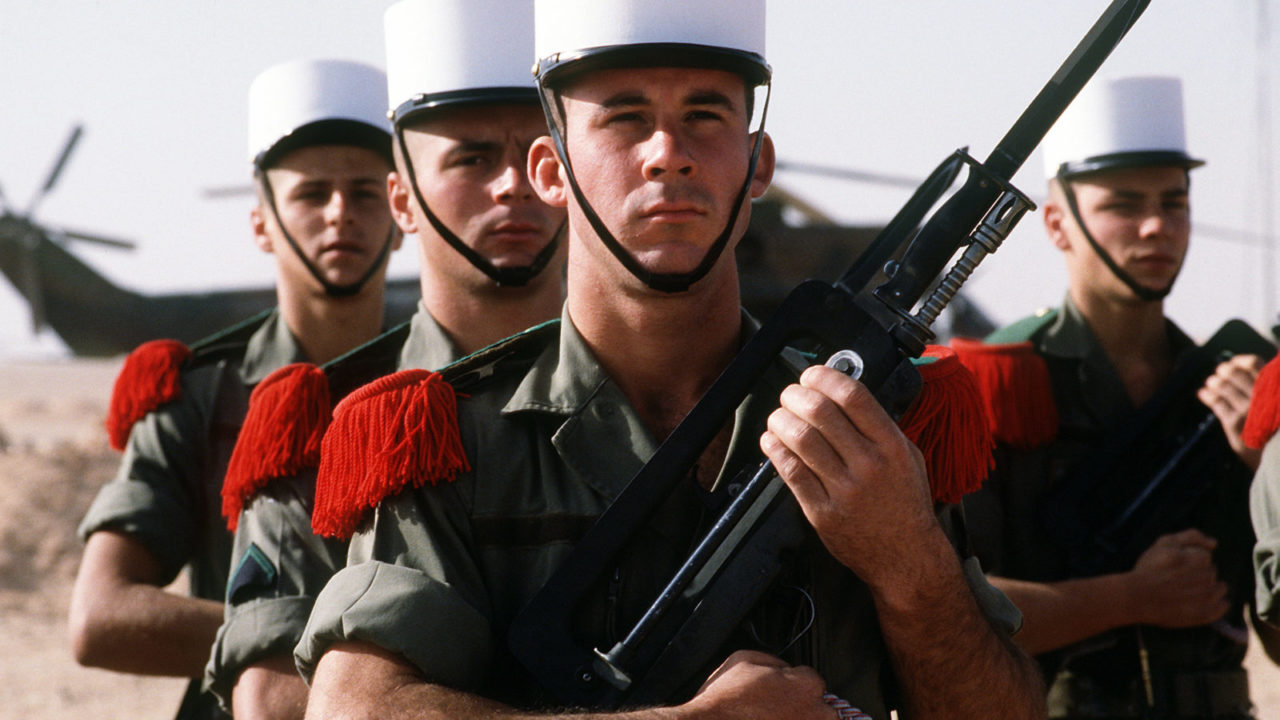 If you are between the ages of 17 ½ and 39 1/2 , there may be a place for you in one of the premier fighting forces in the world – and one that is very likely to have a significant role in the fight against Islamic extremism in the coming months.

You’ll also need a valid identification, a birth certificate, be NOT wanted by INTERPOL, and have a body mass index (BMI) between 20 and 30 (this last item might be a challenge for some of you, but salad can work wonders).

Basically, if you are a living, breathing male between the ages of 18 and 40 and in reasonably moderate shape, the French Foreign Legion might have a place for you. You don’t even have to speak French because they’ll teach you. I imagine you learn quick when the consequences of not understanding include massive numbers of push-ups and not knowing that a grenade is coming your way.

You don’t even need to bring much. The documents listed above, some basic personal hygiene stuff (sorry, you’re going to need to bathe and ditch the “operator beard” for this), and some running shoes. That’s pretty much it. Hell, they might even let you hang on to your favorite Mossy Oak jacket to wear when you get a liberty pass, although you might look a little out of place wearing it in Europe.

The Foreign Legion is a military force that was formed in 1831 to help expand the French Empire. Today, they are made up of members from 140 different countries with less than 24% being French citizens. You, the angry young (or not so young) man looking to take the fight to the Haj, would merely need to get to France – which could be more difficult now that France has closed her borders, but if you’re reading this you’re presumably American and shouldn’t have too much difficulty getting a visa.

Once you join, you can choose one of several jobs from sniper or paratrooper to secretary or bus driver…and everything in between. Your initial contract is for five years and, after three years of satisfactory service, you can even become a French citizen if you wanted to. You can even enlist under another name if you so choose; in case you have a stupid name like Walter Eugene Molenskinner, or something. Or if you just want a cool French name like Jean-Luc Picard or something. This is your time to shine, kid!

The French Foreign Legion has been involved in all manner of combat operations around the world from the Conquest of Algeria in the 1800s to the Global War on Terror in Afghanistan. Sure, you’re going to probably want to delete all those stupid “Freedom Fries” posts from your Facebook account before you go, but in the end you’ll be able to do the very thing you’ve been pontificating about for fifteen fucking years – killing the enemies of freedom. Never mind the fact that the opportunity has been there at your local recruiting station all along, we realize you might have had more important shit to do like stack pants at the local Gap or get that new roof put on Old Man Hanrahan’s barn.

This is your shot, tough guy. Your chance to really show the world that you are not just about Mountain Dew and Xbox…that you can really put your money where your mouth is and lay some fucking lead downrange towards the enemies of freedom and your way of life.

Now, I can’t lie – the 15-week basic training of the French Foreign Legion is no joke. The Legion describes their members as “foreigners who have become sons of France not by blood received but by blood shed.” The training is tough – with no stress cards or safe spaces. No one in the training cadre honestly give a shit about your feelings. The training is tough and the lifestyle is Spartan. I recall a comrade telling about when he was stationed on the Saudi-Kuwait border during the First Gulf War. The Legionnaires next to them laughed when the American paratroopers had port-a-potties delivered. It seemed to the white kepi wearers an unnecessary luxury.

But no worries. You’re one tough mother. I know – I’ve read your Facebook posts.

Log off the World of Warcraft server and log onto a travel website, book a ticket to France, and start the adventure. The world is yours, so make the most of it.