“Iran Could Destroy Israel In Less Than Nine Minutes”

The Gatestone Institute revealed Iran’s Haman’s plot: “The Iranian government, through a website proxy, has laid out what it considers the legal and religious justification for the destruction of Israel and the slaughter of Jews worldwide. Calling Israel a danger to Islam, the website Alef, with ties to the supreme leader, Ayatollah Ali Khamenei, said the opportunity must not be lost to remove ‘this corrupting material.’ There is a ‘jurisprudential justification’ to kill all the Jews and annihilate Israel, and that ‘the Islamic government of Iran must take the helm.’” The article translated here lays out the military strategy to destroy Israel in less than nine minutes with ballistic missiles. Written by Alireza Forghani, a strategy specialist in Khamenei’s camp, this article coincided with Khamenei’s “Israel is a cancerous tumor” speech.

The clash between Haman and Mordecai represents the persistent old-age problem with those who want to destroy the Jews. When Mordechai encourages Esther to go to the king to intercede on behalf of her people, at first, Esther declines, citing the great personal danger to which she would subject herself. Concerned with her own self-preservation, how could Haman be a threat when Haman’s power was still ascending and had not reached his apex of supremacy? 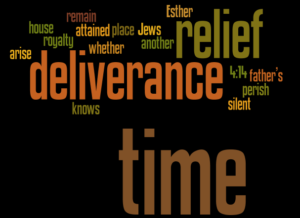 Mordechai advocates self-sacrifice to protect her people from annihilation. The key verse in this ancient book motivates Esther to take a bold step and break royal protocol: “For if you remain silent at this time, relief and deliverance will arise for the Jews from another place and you and your father’s house will perish. And who knows whether you have not attained royalty for such a time as this?” (Esther 4:14, NASB)

Even if Esther does not break royal protocol, the verse intimates that God will intervene on the Jews’ behalf, while Esther perishes. God used an orphaned, female, frightened Jewish captive in the King’s harem to outwit a powerful, genocidal enemy. Today, how does one balance between God’s divine intervention and personal responsibility to step up and break protocol?

Remaining Passive vs. Precedence Over Protocol

Is God ever disinterested in the genocide of any people group? When people blame God for remaining silent or failing to execute ‘justice’, this story illustrates the balance between God’s intervention in our affairs and man’s responsibility. A wise man passed through the Pearly Gates. While on earth, the pain and injustice of the world broke his heart. The first question out of his mouth when he appeared before God?

“Why didn’t you send help?”

Perhaps “for such a time as this,” Prime Minister Netanyahu will speak before Congress on the day before the Fast of Esther commemorating that time when the orphan chosen Queen and imbued with a warrior’s heart decided that defending her people took precedence over protocol.

Speaking From the Warrior’s Heart

Esther broke royal protocol and stood up. Accused of breaking political protocol, Netanyahu is not afraid to warrior up and speak up on behalf of his people, their security concerns and the dangers the world faces from militant Islam.

“An appeaser is one who feeds a crocodile, hoping it will eat him last.” Sir Winston Churchill

Will Mr. Obama continue down the Neville Chamberlain post-WW2 path? Trying to earn Hitler’s love, Neville Chamberlain said, “For the present I ask you to await as calmly as you can the events of the next few days. As long as war has not begun, there is always hope that it may be prevented, and you know that I am going to work for peace to the last moment.” Tell the Muslims, Christians, Yazidis, sex slaves, and families of the beheaded that war has not begun. Denying barbarism ‘to the last moment’ never drives unadulterated evil and hatred away.

Like ebola, depraved savagery left unbridled, spreads, infects and kills the innocent over wider and wider areas. Mirroring the same tone as Chamberlain’s words, Obama prattled on at the United Nations in his ‘Can we all just get along’, might doesn’t make right, but ‘right makes might’ speech on September 24, 2014: “If we think globally and if we act cooperatively — we can shape the course of this century, as our predecessors shaped the post-World War II age.”

Reflection: After Iran’s global terror campaign, which has included attacks in two dozen countries on five continents since 2011 alone, why does Obama keep trying to earn the holocaust deniers’ love? What radioactive fallout will appeasement with the plotters of genocide incur on this generation and the next? What will it take for Obama to walk away from whatever drives his philosophical protocol and to heed Edmund Burke’s prophetic words, “The only thing necessary for evil to triumph is for good people to do nothing.”

Can you identify the views and goals all militant Islamists share in common? Boko Haram in Nigeria; • Ash-Shabab in Somalia; • Hezbollah in Lebanon; • An-Nusrah in Syria; • Daesh in Syria and Iraq • The Mahdi Army in Iraq; • The Al-Qaeda branches in Yemen, Libya, the Philippines, India and elsewhere.

On March 3, 2015, author added transcript of Netanyahu’s speech to Congress.

Resources: 1.09 BILLION People in the world today harbor anti-Semitic attitudes. A survey of attitudes toward Jews in over 100 countries around the world conducted between July 2013 – February 2014. In this survey, the acronym ‘MENA’ refers to “Middle East and North Africa.” The 16 countries with the highest scores of anti-semitism are in MENA.

In Response to Escalating Threats between West and Iran, Iranian Official Calls On (Iranian) Regime To Attack Israel

Iran’s Leadership in Their Own Words

Holocaust Denial and the Iranian Regime In Tehran’s worldview, if six million Jews didn’t die, then Israel has no excuse to exist.

This fact sheet, Iranian Support for Terrorism states: “Iran has been on the State Department’s list of State Sponsors of Terrorism since 1984. Its 2013 Country Reports on Terrorism states that Iran is supporting Hezbollah, Hamas, Palestinian Islamic Jihad, the Popular Front for the Liberation of Palestine-General Command, the Syrian regime (also labeled a State Sponsor of Terrorism), Houthi rebels in Yemen, Shiite militants in Bahrain and Shiite militias in Iraq. The State Department confirmed that Iran continues to work with Al-Qaeda elements, despite their expressed hostility towards one another.”

This fact sheet, The Iranian Nuclear Program, provides a historical view of Iran’s pursuit of nuclear activities. This fact sheet states: “According to the Shiite theological doctrine of taqiyya, it is permitted to utilize deceit and dissimulation when it is perceived to be in the service of the global Muslim community. The Iranian regime’s leadership are ideological adherents of Shiite Islamic doctrine and thus consider themselves legally empowered to employ deceit as they see fit.”

This fact sheet, Iranian Regional Hegemony, explores Iran’s tactics in pursuit of its goals. This fact sheet states: “While Iran is no different from other countries in that it pursues influence and power, in two respects it does differ. The first is in the totalitarian and supremacist ideology that it is seeking to export. The second is the methods with which it aims to support that ideology. The nature of the Iranian state is predicated on a hardline interpretation of Islam applied to the political sphere.”