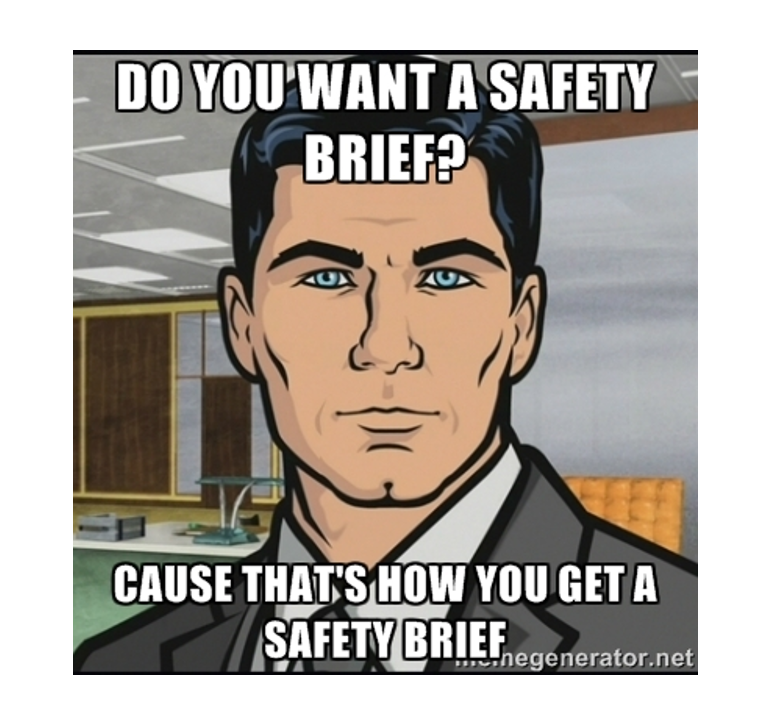 Ah yes, the military’s “safety briefs:”  that last-formation-before-the-weekend time suck where some disgruntled NCO or whichever platoon leader pissed off the CO the most that week has to give a rundown of everything you’re NOT allowed to do while you’re away from work.  Practice safe sex.  Don’t drink and drive. All the usual stuff.  Then there are the things that, on the one hand seem utterly bizarre, but you know actually happened or else it wouldn’t be in the safety brief.  The safety brief is kind of the miltiary’s “warning label,” you wouldn’t get told “do not insert into penis” unless someone actually did it once.

Well, next week’s safety brief just got a little bit longer, thanks to a soldier at Fort Bragg, NC who tried to come onto post dressed for Halloween as… wait for it… a suicide bomber.

I can’t imagine what might possibly go wrong with that!

Just so you don’t think this is some kind of Halloween prank, below is Public Affairs’ message straight off of Fort Bragg’s official Facebook page: 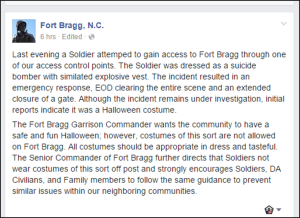 Last evening a Soldier attemped to gain access to Fort Bragg through one of our access control points. The Soldier was dressed as a suicide bomber with similated explosive vest. The incident resulted in an emergency response, EOD clearing the entire scene and an extended closure of a gate. Although the incident remains under investigation, initial reports indicate it was a Halloween costume.

The Fort Bragg Garrison Commander wants the community to have a safe and fun Halloween; however, costumes of this sort are not allowed on Fort Bragg. All costumes should be appropriate in dress and tasteful. The Senior Commander of Fort Bragg further directs that Soldiers not wear costumes of this sort off post and strongly encourages Soldiers, DA Civilians, and Family members to follow the same guidance to prevent similar issues within our neighboring communities.