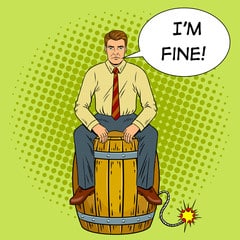 So we just watched the collective heads of nearly everyone explode over this whole Nike/Colin Kaepernick story—one which I said years ago confuses me because I just don’t see what the fuss is about. Once again I’m baffled, given a few pertinent realities that I feel compelled to shine a light on.

First, and perhaps most obvious (even though it seems less so given the yelling), issue worth noting is that, ahem, no one was injured or had their rights infringed upon by Kaepernick kneeling during the anthem. No one. (Before you Hyper-Conservatives get worked up, I suggest you keep reading.)

His protest—which at its core probably had more to do with the fact that he was benched and not all that great at his job—was a silent one that took nothing and endangered no one.

Similarly, Nike’s decision to endorse this man was purely a business move—one calculated at the highest levels of market actors who apparently felt it was worth the risk of losing some people in order to run a campaign that succeeded wildly at getting people to talk about their product. Suddenly even those who would normally scream about BIG EVIL CORPORATIONS EXPLOITING DOWNTRODDEN WORKERS are singing the praises of Nike.

This campaign, like Kaepernick’s protest, hurts no one. People lose nothing if Nike’s gamble pays off—they will not be affected personally by the success (or failure) of this endorsement.

And yet, here we are, seeing the LOUD NOISES response on Mind Poison Social Media in which everyone is outraged about the latest thing that actually deserves little or no attention.

Lost in all of this, of course, is the underlying problem with the NFL (and even college football) that no one wants to actually discuss: the ginormous amount of taxpayer dollars that the league and individual teams receive in order to do everything from building stadiums in certain cities to market for the Department of Defense. Instead of yanking these dollars away from something that is, at best, entertainment (and potentially harmful entertainment at that), we are choosing to throw fits about some dude who chose to kneel during a song.

Compare this to something like what the company Levi Strauss is doing. In a recent public statement, the behemoth clothing company announced it will be diving head-first into lobbying for stricter gun laws.

Call me crazy, but this is actually something worth raising a stink about and even boycotting a company over. They are, quite blatantly, stating that they are going to contribute large sums of money to causes that work towards restricting Constitutional rights. Sure, they offer the placating but-we-totally-dig-the-Second-Amendment line as if it is some sort of carte blanche disclaimer, but the reality is, as I’ve pointed out numerous times over the years in my writing, restrictions of any kind on the Second Amendment—at least at the federal level—are by nature unconstitutional (sorry, Justice Scalia, but you were wrong on this issue).

The purpose here is to point out the obvious difference between the two: while Nike is essentially gambling on a campaign that may or may not alienate, by their own choosing and free will, some of their customers, Levi Strauss has committed significant funding to causes that will use the force of government power to infringe upon basic liberties.

If you’re going to make LOUD NOISES about something, do it about something that actually matters. If you’re yelling about some athlete who is literally taking your outrage to the bank (while in a fancy car), then it’s probably the wrong thing to get upset about.