One of the things I love about my job with Havok Journal is that it allows me to highlight and promote the interests and activities of fellow veterans.  I especially like promoting veterans’ business interests, because it shows a positive side of the Veteran Community and helps combat the “dysfunctional veteran” stereotype.  Sometimes I get to publish stories about the adventures of  veterans who are friends of mine, like Marty Skovlund or Leo Jenkins.  Sometimes I get to promote the work of veterans who I’ve only met once or twice, like Zach Iscol or Jarred Taylor, or fellow vets I’ve never met but feel like I know because of all the times we’ve talked on the phone or through Facebook, like Vince Vargas or Nick Palmisciano.

But this is the first time I’ve had the opportunity to promote a business started by someone I served with downrange.

Chris and I were assigned to a joint SOF unit at Fort Bragg and served together in Iraq as part of an organization most people refer to simply as “the Task Force.”  Even though we were different ranks and different branches of service, we instantly clicked and have remained friends ever since.  Chris was an outstanding NCO who did his best to keep us out of trouble…  a full-time job that he was able to pull off most of the time.  He was also really good with his hands.  So with his background in SpecOps and his skill with his hands, it was no surprise to me that Chris started a security-related side project which he named, appropriately enough, Dark Metal Fabrication.

On the site’s home page, Chris explains what drove him to stand up Dark Metal:

I created Dark Metal Fabrication with the original intention to do local fabrication work in addition to my full time job. Several months after I created Dark Metal, a group of armed men broke into a local couple’s home and brutally murdered them in front of their children. It was a gut wrenching story that was too close to home. At that point, I had been working in, and around, Government security for 14 years, so I made the decision to focus Dark Metals efforts on physical security measurements.

One of the skills I learned in the Task Force was lock picking.  I had limited training but was decent enough.  Wanting to get back into practice, I ordered a set of Slimline picks.  I opted for the hardshell case, in Multicam.  It’s a set of 20 picks and three tension bars.  Chris offered to send a set to me for free, but I think that part of supporting veteran businesses is actually paying them for their products or services.  Chris made the case himself.  Here’s what they looked like when they arrived:

I mentioned to Chris that I was going to put together a practice stand using a scrap 2 x 4 and some old locks I had in the garage.  His response was typical:  “No brother, I’ve got you.  Give me a couple of days.”  The result was nothing short of amazing: 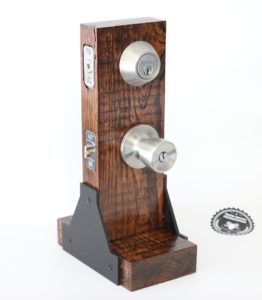 Chris absolutely refused to let me pay him for the practice stand, insisting that it was “just a prototype” that he didn’t feel comfortable selling.  What Chris considered “prototype” I consider “professional grade.”  Any shortcomings that may have existed in this product are transparent to me.  I thought it was beautiful.  This kind of attention to detail in a prototype is the kind of thing that is going to keep customers coming back for more.

This is what the pick set and practice stand looked like on a desk in my office, where I’ve been practicing my picking skills. 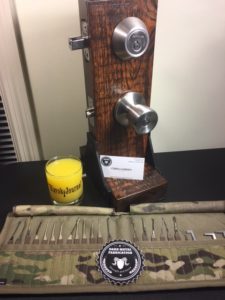 Good work Chris, and good luck with Dark Metal Fabrications; I think you have a bright future as a vetrepreneur.