HomeNationContemporary AffairsBubba is Going to Do WHAT to the “General Lee?” 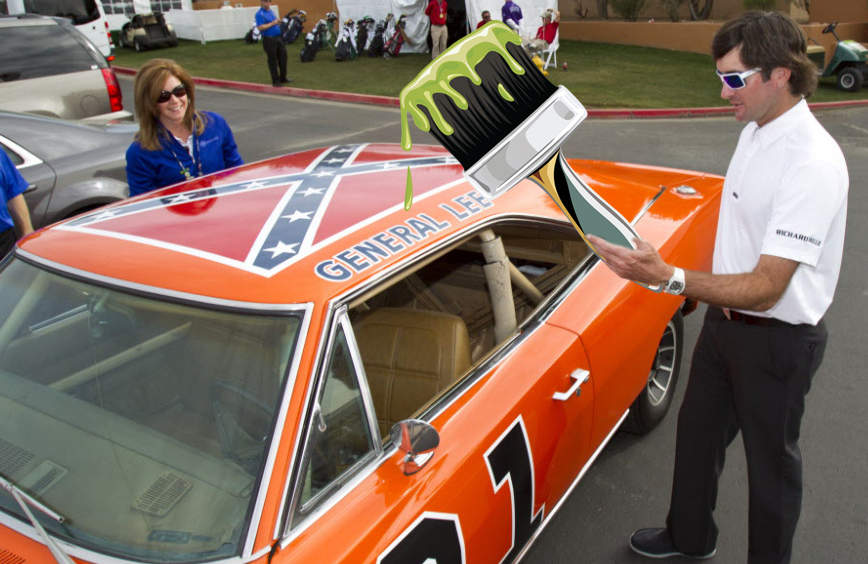 Have you heard the one about the professional golfer, Bubba Watson, who plunked down $110,000 a couple of years ago to buy at auction The Dukes of Hazzard classic auto, the General Lee?  What, you say, the joke’s on him, as there had to have been lots of General Lees for the multi-year TV show, as any automobile can only survive so many weekly jumping of freight trains before it crumbles into a pile of shredded tires, busted springs, crumpled side panels and pretzeled axles.

Nope that’s not the joke. Bubba Watson’s made enough millions on the golf course to have a bevy of attorneys who could authenticate his General Lee as a genuine Dukes car. Bubba himself is the joke, as now this summer in our sudden desperation to cleanse ourselves of blatant, latent or nonexistent racism he says that he is going to paint over the Rebel stars-and-bars flag on the Lee‘s roof, thus rendering the car politically correct . . . . and worthless.

That’s like the Taliban dynamiting the 6th-century Buddha of Bamiyan statues. There’s no bringing them back, patching and filling them with Bondo. Bubba Watson might make note, that sanding, priming and painting over the Lee‘s roof flag is like Gorilla-gluing a velvet portrait of Elvis over the Mona Lisa. Kiss the Mona Lisa goodbye.

Hey, but it’s his car, it’s his $110,000 and he can do whatever he wants with it. He can drive the Lee up onto just about any tee on the Pebble Beach Golf Course, douse the car with gasoline, plant a brick on the accelerator, shift the gear lever into Drive, flick a Bic lighter, and let the flaming Charger race across the turf and over the cliffs and into the Pacific Ocean. (The YouTube video would be dynamite; no reference to Taliban/Buddha intended.)

Yes, it’s his vehicle, but the joke’s on him because he’s gone beyond pansy-assed political correctness and crossed over into political cowardice. And why? For no apparent good reason, because a week ago not a soul cared a whit before about him owning the Confederate flag-adorned car.

So, what’s up? Did he buy the car for the flag, and for the last couple of years was simply unaware of the flag’s significance, thinking the crossed stripes and stars were a cool design? And now a wacko South Carolinian nutjob whose last name rhymes with woof, (with a dog’s IQ to match, and a rabid dog’s morality), suddenly becomes the impetus to make every vestige of the flag into overt racism, and Bubba’s up at the front of the line to declare, “Look, look at me, I’m not racist!”

What, was he racist before? For the past couple of years, treasuring the General Lee, has he been of like mind with Rhymes-With-Woof, secretly wishing that Dixie would rise again and he, now a multi-millionaire golfer, could retire to his own slave-rich Florida plantation? Along with all those attorneys he can afford, doesn’t he have on staff at least one psychologist who has advised him about a symptom called “over-compensation”? Or, as Shakespeare put it, “Thou dost protest too much.”

It’s Psychology 101. One’s left to wonder what Bubba’s hiding from us about his dark soul with such a dramatic action as to paint over the flag? A month ago he valued the vehicle as it was and left it pristine, and now he’s suddenly so incensed to learn of its inherent racism that he has to destroy it? Couldn’t he at least allow someone else to buy it car—someone who appreciates the Dukes of Hazzard history behind that hunk of orange metal and is not a political coward?

Again, Bubba can do what he wants, it’s his car. If he’s going to paint over the flag, he should be honest with himself and cover it with a yellow stripe painted all the way from the front grill to the rear bumper. And paint over the name as well. Forget General Lee, it can be called the General McClellan. Or the General Hooker. Or just Chicken Little.

And while he’s at it, he might as well get rid of that redneck south-of-the-Mason-Dixon-Line nickname Bubba. If the General Lee is racist and the flag is racist, the name Bubba, that’s got to be racist to the Nth degree. No more “Bubba” for Gerry Lester Watson, Jr.—just call him Ger.

Gerry Lester winning two Masters tells me that he is one of the world’s best golfers, which is good for his self-confidence and bank account and for getting chicks, but the golf course is a million miles from the streets of Fallujah and the grape orchards of Kandahar and from Antietam’s cornfield and Gettysburg’s  Cemetery Ridge. Were he to be under fire on an actual battlefield like those, I would not follow him for three steps, regardless the flag we fought under.

Paul Avallone spent three-plus years in Afghanistan as a Green Beret then an embedded civilian journalist. Were he today still writing his published novel of the Afghan War, Tattoo Zoo, he would ensure that at least one of the characters—Staff Sergeant Ketchum perhaps, or Private Finkle—had an inked rendering of the stars-and-bars on an upper arm, just to piss off the politically cowardly who dominate America’s sanctimonious elite class, (in particular, the literati).