In the latest act of the three-ring circus that is the Bowe Bergdahl story, it was revealed yesterday that the (in)famous Army sergeant claimed to have left his place of duty on a remote Afghanistan outpost not to desert the US Army, not to defect to the enemy, but for a far more noble purpose:  to report wrongdoing in his own unit. 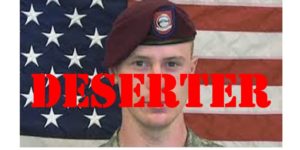 This “revelation” flies in the face of evidence released earlier, and is so far substantiated only by Bergdahl himself.  It comes after the Army, in a move sure to rile the Obama administration, finally did the right thing and announced that it was proceeding with the court-martial of Sergeant Bergdahl, who is now facing charges that include desertion.

According to attorney Eugene Fidell, Bergdahl’s “specific intent was to bring what he thought were disturbing circumstances to the attention of the nearest general officer.”  There is only one reasonable response I can give to this claim:

With all the time in and out of captivity that Bergdahl had to come up with a cover story, this is the best he could do?  Seriously?  Bergdahl and his attorney expect the court-martial panel, and the American people, to believe the Bergdahl left the relative security of his own base, alone and without his military weapons and gear, to walk through Taliban-held territory to deliver a message “to the nearest general officer?”  How much sense does that make?

…wouldn’t it have been a lot easier to just pick up a phone?

I know the outpost was remote, but email wasn’t an option?  No satphone, no SINCGARS, nothing?  No resupply convoys, or battlefield circulation visits that would bring outsiders that might listen to what much have been really, really serious concerns of then-Private First Class Bergdahl?  No letters, no chaplain, no Red Cross?  The only solution was to take off on foot?  No. F’ing. Way.

Bergdahl’s excuse is worse than unbelievable, it’s insulting.  I was not in his unit and never met him personally, but I and everyone else in-country at the time spent an EXTREME amount of time looking for him.  Some people paid a heavy price in the search.   The evidence that has already been made public, including the testimony of people who personally served with him at the time of his disappearance, make it pretty plain what happened.  To hear him make any claim is disgusting.

I am not in a position to know what the situation was like in Bergdahl’s unit, and I know that there were some scattered instances of really, really bad things going on at the unit level.  But I don’t believe for a second that the reason PFC Bowe Bergdahl walked away from his comrades, his Army, and his country on that day back in 2009 was for any kind of noble purpose.  Bergdahl wanted to desert, and he did.  And now, finally, he’s being held accountable.

Whether or not Bergdahl deserted “to” the enemy or just “away” from the Army is an open question, one that the Army seems to be wisely avoiding at Bergdahl’s upcoming trial.  I think there is little question that he will be found guilty at court-martial.  But how should the Army punish him?