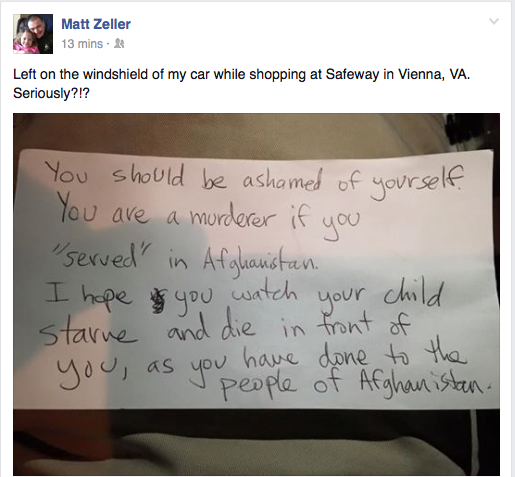 Matt Zeller is a man who has routinely put others before himself, in nearly every facet of his life. He is an Army intelligence officer, Afghan war veteran, and recipient of the Combat Action Badge, Purple Heart, and especially evident of his selflessness – the Military Outstanding Volunteer Service Medal. He has also served his country as a CIA analyst, as well as led a campaign to provide asylum for Iraqi and Afghani interpreters who served alongside U.S. forces in combat. It’s this dedication to serving those around him that has made him a respected figure, someone you would only wish the best for.

Sometimes, even the kindest people receive the kind of treatment that should make all of us shake our heads in disappointment. On Sunday, April 26th, Matt went shopping at a local Safeway grocery store in Vienna, Virginia with his daughter. It was upon return to his vehicle in the parking lot that he discovered a note left on his windshield, shaming him for his service in Afghanistan and wishing death upon his daughter. The note read, “You should be ashamed of yourself. You are a murderer if you ‘served’ in Afghanistan. I hope you watch your child starve and die in front of you, as you have done to the people of Afghanistan.”

Shocking? Yes. For the cowardly note-writer to bring his daughter into it? Unbelievable. Matt was angered when he first saw what was written, “I wanted to confront the person. What coward threatens a toddler? I have a car seat in my car. Disagree with the war? Fine. Disagree with my service? Fine. Both are one’s right. Threaten my kid? Line crossed.”

Most reasonable people can agree that it’s ok to question the United States’ course of action in Afghanistan. What’s not ok is to accuse someone who has served in Afghanistan of murder. Most military personnel who have served there have never even fired their weapon, and there was no possible way for the nefarious note-writer to have known whether Matt has pulled the trigger or not, or ended a life for that matter. It’s reasonable to assume that the person who wrote this is against war and violence, yet they wish starvation and death on a child? That doesn’t even make sense.

In my eyes, the worst thing that was perpetrated by this person was not the sentiment of the note, but rather that they were so cowardly that they wrote a note and left it on Matt’s windshield, unable to confront him face to face. Maybe not all veterans feel the same as I do, but I would rather be confronted face to face with accusations like the ones contained in the note, so I could rebut them in a logical manner – and maybe even educate the accuser.

Also, if you’re going to wish harm upon a man’s child, you should be ready for whatever comes next. Anything less, and you are simply a coward. American veterans deserve better than this. I hope whoever wrote that note see’s this, and realizes how disrespectful and cowardly their actions were. Fortunately for us, we have patriots like Matt Zeller who will continue to selflessly serve their nation and their fellow man. That is what makes our nation so great.