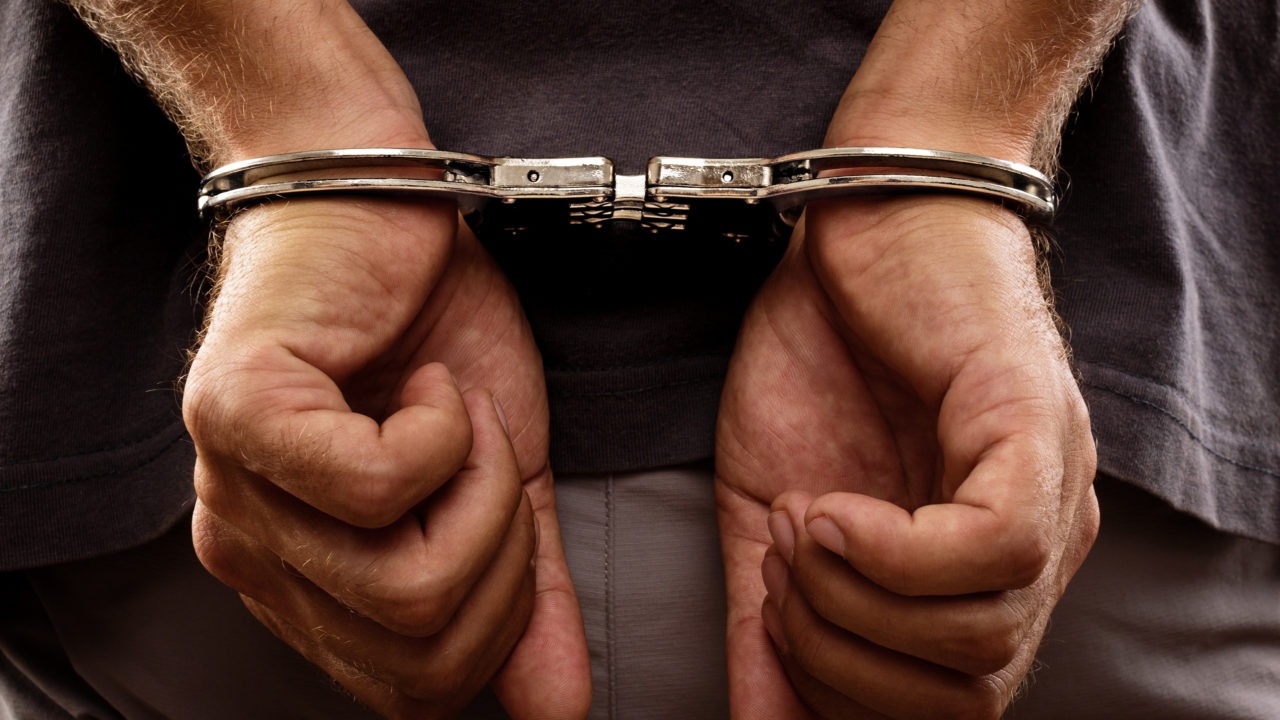 This originally published in Frank’s Blog on April 26, 2017. It is republished here with the author’s permission. This article is part 2 of a 5-part series. Be sure to read part 1 “Be Careful.”

“As we contemplate the horror
Of the senseless things men do
In this search for rhyme or reason
One must finally come to view
This recurring nightmare madness
As merely Man’s attempt
To prove that nothing’s sacred
That no one is exempt
So, let the wayward children play
Let the wicked have their day
Let the chips fall where they may
We’re all going to Disneyland”
Dis Land from Timbuk 3

Getting arrested is a lot like getting on to a rollercoaster. Once you are on, there are no more decisions to make, and you can’t get off the ride until it comes to a complete stop. Our ride lasted over twelve hours.

The cops put us into the paddy wagon and took us for a short drive to a different part of the air base. Just as an aside, the police had two paddy wagons at the place of our arrest, along with thirteen squad cars. They were ready for anything. It reminded me of the part in Alice’s Restaurant when Arlo Guthrie gets busted for littering and says that “when we got to the scene of the crime, there was five police officers and three police cars, bein’ the biggest crime of the last fifty years and everybody wanted to get in the newspaper story about it.”

That pretty much sums up the situation at Creech.

The police took us out of the vehicle and walked us over to an enclosed area that was set up for processing miscreants. Once again, a bit over-prepared. People in plain clothes were there too. FBI. The cops took all of our possessions and put them into paper bags. We filled out paperwork. We traded the plastic restraints for handcuffs that were attached to a chain that went around the waist. Then it was back into the van. We were going to Disneyland. Two squad cars followed the van… just in case.

We arrived at the Clark County Detention Center [CCDC] in Las Vegas. That’s where I did all my gambling. The first activity after leaving the paddy wagon was to remove our shoes and socks. With the shackles, it was too much of a challenge for us to do that on our own. A police officer took mine off for me. I asked him if this was the best part of his shift. I don’t remember his response.

From that place in the garage, we went inside the CCDC to sit on a bench. We did a lot of bench-sitting during the next several hours. Every once in a while, somebody would yell at one of us to come and do something. It reminded me a great deal of my first day as a plebe at West Point. They patted us down again, they looked into our mouths. Then a brief medical exam. While sitting there, we talked and waited. There were no clocks in the room. Time there has no meaning.

Mike of the many buttons said to me, “I guess we forgot to tell you about the boring part of being arrested!”

At one point they fed us, sort of. Each of us got a brown plastic tray with something resembling food on it. My tray had two slices of bread, a mixture of potatoes and ground beef, carrots, and a broken cookie. I got the opportunity to smell the food, but not to eat it. I couldn’t get the plastic spoon to my mouth while wearing the handcuffs.

The longer I looked at the meal the more certain I was that not being able to eat wasn’t all that bad. The best part of the experience was the fact the tray had served as the cover for the tray of food beneath. That way the warm moisture from the tray below my tray was able to soak through my jeans as the tray rested on top of my lap.

We were fed again later in the day. That meal was just as good as the first go around. Mike the Guitarist and I determined that nobody could make food this bad by accident. Somebody had to try to cook something this nasty.

At one of the stops to fill out even more forms, a lady asked me if I was a vet. I told her “yes.” She got out a big ink stamp and stamped “VETERAN” in bold letters in the middle of my charge sheet. I’m not sure why they care about that. Maybe they won’t want to have a civil disobedient vet in the courtroom. I don’t know.

A policewoman called for people one by one to check some paperwork. She called out, “Francis Paul”. I got up off of the bench and went to her. I told her that “Paul” is not my last name.

She looked at me funny and said, “Then I got to find this ‘Paul’ guy…”

She looked again at the form. “Okay, we’ll fix it. Just respond to ‘Paul’ when somebody calls for you.”

That’s what I did for the rest of my time in jail. Not once did anybody use my real name. One guard told me that they had fixed it on the paperwork, just because they didn’t want me to have an alias. I guess having an alias would be kind of cool. Oh well.

The last activity in that room was a kiosk where I signed a form that authorizes the police to release me on my own recognizance. Then the handcuffs came off and I got to move to the next big room where they have “unicorns and rainbows”, as one of the guards told us. Actually they have TVs that play “Family Guy” and “American Dad” over and over. They also have more benches. They do the mug shots and fingerprinting there too.

A policewoman called me over to her desk to ask me more questions. She seemed kind of perky. She smiled and asked me, “So, how do you like our new jail?”

Really. What the hell kind of question is that?

The hall is next to the holding cells. Several times a guy from one of the cells screamed loud enough to be heard over the sound of the television. That was disconcerting.

Eventually, I heard a guard yell, “Paul!” I got up. He took me to a holding cell.

I got to sit on another bench.

This first appeared in The Havok Journal on February 27, 2021.