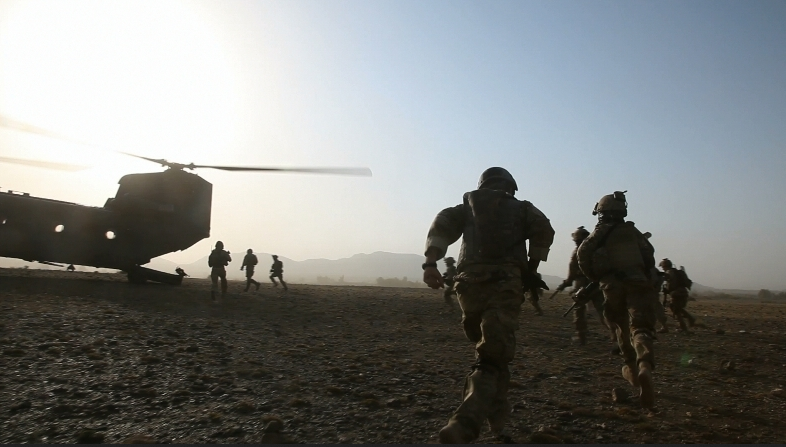 Not being there in the suck was probably the toughest part of this war to me, at least. I had the opportunity to attend the world’s greatest military academy, West Point, and my short time there was ruined because I had already seen the leaders of men I wanted to walk among and fight shoulder to shoulder at the tip of the spear with.

The rangers were on the ground by October 19th, 2001. That was 38 days after September 11th happened. Guys from that unit lead from the front in the most literal sense, and against the most important targets, in my opinion. It ate at my soul every day I was away at West Point until I finally returned. Once I was back, it was a grueling existence, every day we woke up knowing we were going to have to reach a point of near-death exhaustion before we got breakfast. But it was worth it. By 10:00 a.m. of every day, we felt like giant gorillas of men that could rip the enemy apart after we ran him down for miles.

We’d find ourselves jumping out of a plane during the day or night, breaching with explosives of all sorts and understanding which ones to use in which situations, along with all the mechanical breaching and ballistic breaching methods, clearing rooms with live rounds, fast roping or riding on a little bird…or shooting mortars and blowing a tractor trailer load of ammo up. All these things could be done because we had true leadership. There were men there that could run us to death if they didn’t want you there on their team. So, you were in good hands, but very rough hands.

When you’re a senior private, you start leading in a very meaningful way. You’re teaching a guy how to survive everyday life and actually do his job. You help them get their kit together, it’s set up in a routine fashion. You do this until they go on enough missions to know what they do and don’t need and where to put which pouches like your radio or a dump pouch for your dip and other things you carried.

As you move to Team Leader, there you’re like a big brother. When you go on missions, every one of your guys is looking to you.  You’ll have your senior privates making sure the new guy doesn’t wander off and isn’t staring at a wall and the team leader who will go into the breach after doing so hundreds of times as a private and senior private himself.

The Team Leader also has a mentor, that’s his squad leader. Now, your squad leader knows everything. He always knows what to do and when to do it, and the other ones are the same. As if that wasn’t enough solid leadership to go to hell and back, your platoon sergeant is there, overseeing everything. When shit gets hot, you better clear the net and hear what he has to say. Not to say squad leaders don’t roll with what’s handed to them. For example, I remember our team getting ambushed from 50 meters away and without a word, the first squad leader took alpha team straight into the middle of that flashing woodline, while the bravo team instinctively fired 203 rounds, which did a lot. The 240 lit it up and they moved in behind where alpha team had started their maneuver and shifted fire without a word. Seeing our brothers slicing their way into that mess with their lasers, while I just slammed every round I could. It all happened in a matter of probably three to five minutes. The leadership made the difference.

After that mission, I remember walking into the mountains. They were so tall and steep that I couldn’t stand up straight without falling over backward. We were over four hours away from the nearest friendly unit, which may have been some Bulgarian artillery unit so it was really just a check in the box so we could go out. We’d see nothing but white peaks as far as the eye could see, mountains that made the Rockies look gentle. When we were out there walking through the soles of our feet, on our own, in a place that could be the moon, as far as the connection to the outside world was concerned.  We still weren’t scared because of the larger-than-life men we had leading us.

After getting hit by a drunk driver in 2009, being medically released from the army in 2010, and sitting back home trying to strap me into a walker to go to the bathroom, this was now the scariest place on earth for me. All I could wish for was to be there with my ranger brothers. A lot of my friends died after I was hurt, friends – the leaders of men – some of them whom I was on a team with and slept shoulder to shoulder on green army cots in a one-room plywood cabin. These were friends that I ran across an objective to warn them about men on a rooftop above their Humvee because their radio wasn’t working and they couldn’t know about those guys creeping up on them. My buddy, Jason Santora, swung his 50 over where the men were on the roof and smacked a burst against the corner of the rooftop and they scattered. They were cleaned up by our JTACS eventually, air strikes are what officers in regiment love and are great at. They will scorch the earth on your behalf, that always made me feel more at ease. They’d put their neck on the line and drop whatever it took to make sure we could get back off this “moon base” and into our magic murder bus, also known as, a chinook.