HomeLeadershipAn Inch Deep and a Mile Wide, Leaders are Failing to Focus Their Teams 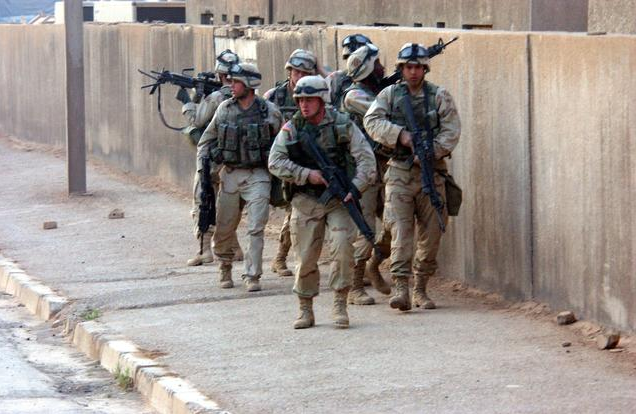 This first appeared in The Havok Journal on August 11, 2020. Where are we today?

It was raining outside, lightly, but no matter. The Soldiers of Easy Company War Party stood in formation, mud sticking to the edges of worn boots, enough chill in the air to wake you up and merit a poncho, but two raw privates had managed to lose theirs overnight recently and for the sake of a pending photo op, everybody was dressed uniformly. Shivering. Prior to the photo, their commander was bent on congratulating them after a three-week training exercise; the culmination of nine months of rigorous field training and exercises with limited breaks for the holidays. It was the twilight of morning, in early March 2020. Exercised readiness was peaking at just the right time for a deployment to an unnamed portion of the Middle East in early May.

“Outstanding Job War Party, WHAT’S THAT SOUND?!” which was followed by a few rounds of ‘Always Ready, AAaaaahheeeee’ volleyed back and forth with ‘I CAN’T HEAR YOU!’ It’s been a hard nine months, forcing us to move our equipment over 13 states, displace, set up, and execute training in unfamiliar territory. We have all sacrificed family time, personal health, and comfort, but as a collective team, we have both met and set the standard for readiness. The pain we just endured will be useful in the form of experience come May.”

The commander had very deliberately charted his unit’s course up to this very moment. Months of coordination at their home station all in an effort to set all the proper conditions to maximize windows of focused exercise time built to test his soldiers against the anticipated threats he was told they would face.

He felt he had done his best to mitigate and reduce the threat to his forces by building their readiness. But had he?

He poured everything he had into whittling away pages of requirements to those that would address his best guess at what they needed to be prepared for. Due to bureaucratic requirements that countered his own instinct, he was still required to spend intellectual capital and time on things on the list of 1000 he didn’t feel he needed to. He was given no choice but to build breadth into his formation, at the sacrifice of knowledge and training depth on what he considered the most important. Only time and the real-time adversarial environment would tell which was correct.

At this same time, two hours up the road in a large hotel conference room for an ‘off-site’ planning meeting, a regional president of a large retailer was kicking off an early start to a three-day workshop with her executive team and their reports. Relationships are the grease that keeps the wheels of business turning, and turn they did after an hour of coffee, carbs, and catching up. “It’s great to have everyone together, we just don’t do this enough. We are going to start today with a quick review of last year’s results.”

After an hour of self-congratulatory slide viewing, the company’s steady progress and trajectory was clear. “Now, in order to really capitalize on this momentum, our goal over the next three days is to chart the course on the following seven work streams; Leadership Diversity, Store Experience 3.0, Carbon Neutrality 2025, Lean Inventory Level Up, the Value Based Buying program, which we’ve got to balance with our Regional Vendor Buying Initiative, all propelling us to our 5-year plan for 25% Growth and 2.5B in Operating Income. I could not be prouder of this team. We have the right people in the room to really take this business to the next level and achieve these OBGs (Outrageously Big Goals). So, push the boundaries. Think outside the box. Pick your cliché, we need all the brainpower you can apply. We’ll fuel it with unlimited coffee. (laughs all around).”

Both of these teams from two very different sides of the professional spectrum, imperfect but high performing in their sphere of operation, were not ready for what came next. By April 1st, everything changed, the systems and processes, and readiness achieved to put both military units and businesses in the best possible position of advantage moving into the second quarter of 2020, evaporated with a dynamic change to the system they were building toward.

At their heart, both of these groups belong to systems that have developed to a point where broad preparedness has been heavily emphasized, however, the resources to contribute to this flexibility have reached a limit and the choices made regarding how to use available time and money are being mis-handled, not for a lack of effort or competence, but simply because of uncertainty in the face of a lack of capacity.

As a result, core competencies are eroding, and this is being overlooked in the name of broad over-preparedness and ambition to cover for leadership gaps. If and when failures happen, leaders can default to, “well there is no excuse for the failure, the formation or team had been introduced and trained to respond to that circumstance…” The result often turns into a carousel of talent in mid-level management positions that get chewed up and spit out until somebody with the least work-life balance lands responsibility, or the scope of a role changes enough to become more manageable.

As a direct example, an infantry unit that spends 80% of its time training non-infantry specific tasks as required is no longer an infantry unit. In order to be a true infantry unit, they must be out of compliance with a broad range of other training requirements that have accumulated over a long time with minimal arbitration.

The same goes for the store, warehouse, or manufacturing management. When an operation is asked to execute 3 or 4 major initiatives with minimal support in an environment of ever-escalating goals requiring leaner staff and improved key performance indicators, they are no longer experts in the basic function of their business.

This is not to dismiss progress, initiatives, change, and improvement. Quite the opposite. This is a call to leaders of large organizations to get ‘boots on the ground’ with their units, with their teams, with the people who run the day-to-day operation, and do a sincere gut check of expectations vs capabilities and priorities vs level of support.

Here are some questions to ask, and might make a worthy poll of your organization:

1) What are the things you want your teams to be good at? What should they be good at?
a. Are they good at them?
b. Do they have the resources to be good at them?
c. If something dramatically unexpected happens to this team, are they prepared to deal with it and maintain their core competency?

2) Are you overwhelming them with other priorities?

3) What is your Say/Do ratio for:
a. expectation setting
b. change management
c. work-life balance

And finally, as a leader in a large organization, what is the language you are using to communicate with them? And is your language meeting the intent you have for it? We’ll dive into this last question in part II of this series

To illustrate the point more simply, organizations are finding themselves with a task to stock their refrigerators. They go to the store with a large list of wants, but buried within that list are the needs, the staples i.e. when leaders adhere to the entire list, they are able to purchase less of each item; when they focus on the list on essentials, they are able to purchase more. Their currency remains time, people, and resourcing. Once stocked to the most appropriate levels they can afford, that supply of readiness in food has a shelf life of time, through attrition of use/waste or disuse. Leaders in these large organizations spend tons of resources purchasing the wanted items, but more and more have no currency to purchase flexibility and depth on the core needs.

When a dynamic change happens like a COVID-19 or a housing market collapse, they find they’ve built a stock in their refrigerator an inch deep in necessities and a mile wide in nice-to-have items.
In conclusion, leaders in both the military and business find themselves at a unique impasse. One generated in part due to the COVID-19 pandemic, but one that could be replicated with any major change to their prescribed system of organization. Organizations are broadly stretched and under-resourced, shifting their focus from core competencies. Leaders must trust their experience to build systems that adapt, they must seek ways to avoid buying the whole shopping list to stock their fridge, and first ensure it is stocked in a way that ensures the resiliency of their system.

Major Joshua A. Lyons is a graduate of Indiana University Class of 06’ where he was commissioned as a United States Army Air Defense Officer. He holds a Master’s in Military Operational Arts and Science from the United States Air Force Air Command Staff College. He serves as the Active Defense Chief at the Army Air Missile Defense Command level within the Combined Air Operations Center.  He additionally served a three-year tour as an Operational Advisor with the U.S. Army Asymmetric Warfare Group as a Troop Commander and the Group S-3. His other works include Defining Cross Domain Maneuver for the 21st Century, the U.S. Army Travel Awareness Handbook, and multiple articles within the Small Arms Review and the Asymmetric Warfare Journal.

Dan McGurk likes to take big problems, understand all their little pieces, and then find clever ways to make those problems better, or at least better understood. His career started with Uncle Sam as a US Army Logistics officer (3rdGeneration Quartermaster) with multiple visits to Operation Iraqi Freedom and a firm belief that all his high-speed combat-arms friends needed a high-speed guy keeping them well supplied and organized. His post-military career includes 10 years of a broad range of disciplines in Corporate America across Sales, Finance, Logistics, Distribution, Analytics, and more in industries spanning retail, pharmaceutical, apparel, and tech. He is currently the Director of Industrial Strategy for the North American Division of a global automotive parts manufacturer.