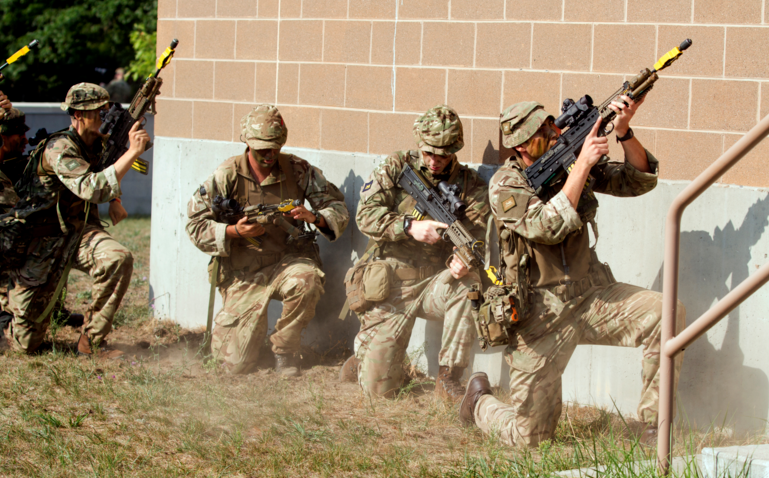 This originally appeared in vocal media and is republished here with the author’s permission.

I started shooting at 5, growing up in a place where I could earn pocket money later on by selling Pigeons and Rabbits to the local Butcher in the village.

My Happy Place as a kid was in our Woods with an Airgun, or Shotgun later on and I’d spend days at a time either Target Shooting at increasingly longer ranges (for a .22 Air Rifle) or at smaller and smaller targets, my mind quite happily calculating the parabola of flight made by a tiny pellet to ensure it smacked into just the spot that I had decided it would in wind or at night.

It subsumed me for decades, from my earliest experiences that even I can’t remember when I’d be with my Grandad or my Dad as a toddler; watching, living, and learning how to calculate forces and where to direct that energy; to getting Top Student on my Reserves General Purpose Machine Gun Sustained Fire Cadre which was a 2 weeker Annual Camp with 3rd Battalion RWF at Là Courtine in France.

Eight students with three Sergeant Instructors as Directing Staff, we put down 40,000 rounds over 10 days of range time; the eight students were a mix of The Princess of Wales Royal Regiment and RWF privates and one Corporal who had done Op Tours but hadn’t done the Guns Platoon course up till then.

Là Courtiné was hot, humid, and wet, or conversely freezing cold at night, in very stark and austere Foreign Legion quarters, the Legionàries having deployed elsewhere or gone on block leave, and I loved every bit of those two weeks with the lads even when on the firing points as the puddles became a river and the water would enter the bottom of my waterproof trousers eventually and then run out the top of my storm collar and gather against my right arm when being Gunner in the Sustained Fire role.

Two dudes to each Gun Team, 1 x 7.62mm Belt Fed Gas Operated General Purpose Machine Gun known to us as the “Gimpy” (FN MAG to the rest of the world) or “The General” (“The Fucking Cunting Bastarding Thing” when cleaning them) plus all it’s associated kit and ammunition.

In the Light Role, the GPMG is used by the British Army as a section-level weapon system which comprises the gun itself, the ammunition needed to run the gun effectively and make it worthwhile carrying, the gunner who has been trained on it and is responsible for its operation and maintenance and then the other members of the Section who will take some of the belts of heavy 7.62 ammo or spare barrels if issued out.

Any crew-served weapon system should always be seen as a machine that has to be maintained and fed and operated in exactly the same way that a factory does; a source of materials come in one way and are put through a physical and chemical process to transform them into something else, or to harness their properties for another process.

That takes training, learned and latent skills, a capacity to ignore physical pain sometimes, and being able to critically think through a series of events whilst under heavy fire in Iraq and Afghan or running the line at 3 am in the factory where the same perfection is expected in operating those very expensive bits of machinery and ensuring the end product is up to specifications.

It is what it is.

The GPMG would eat its ammo at a rate decided by the cadence of the gunner and the gas setting of that particular machine gun; although each gun had come off the factory floor at the same time, they’d been used for decades and each had very slight tolerance differences between the guns and the spare barrels, right down to having to zero each barrel individually and balance each gas plug to that barrel and gun.

In the light role it was 3 to 5 seconds bursts and running the gun at anywhere between 600-900 rpm by dialing in the gas plug clicks; normally 6 clicks from the closed position as a standard procedure and then fine-tuning from there and after a while you could tell from the recoil and the different toned chatters of the metal components all working in harmony where the gun’s sweet spot was.

A machine gun really is a machine and when you depress the trigger on a GPMG, you’re moving down a very simple catch that then allows a large chunk of metal, held back under heavy spring tension, to slam forward, strip a round from the disintegrating link, chamber it, lock, fire almost instantly, be slammed back by the chemical process and then begin the revolution again whilst a feed system pulls in the belt and pushes the spent brass and disintegrating metal link out their respective ejection ports.

As long as the heat is managed and the working parts don’t bind up or slip, the ammo keeps flowing and the gunner is still alive, then that machine gun can be made to keep chugging along and do what it’s made for whilst sounding like an old tractor engine as carbon build-up threatens to stop it working.

Putting down suppressive or direct fire into an enemy position from close range if needed or out to 1800m on the Iron Sights, although with tracer burnout at 1100m a spotter becomes a necessity which then ties back into the whole crew-served weapon concept.

Even though one dude is carrying the General, everyone’s responsible for it and carries ammo for that and mortar bombs for the Mortars and anti-tank refills for the Javelins or whatever else the large and unwieldy bit of kit is called that you have to carry in or on your kit.

In the Sustained Fire role it steps up a gear in effectiveness, range, and weight; lads in the Support/Heavy Weapons Platoon regularly carry their own body weight in kit and weapons, food, water, etc.

It is what it is.

Being Reserve units, our 3rd Battalion of PWRR Guns Platoon and the RWF’s were smaller than our Regular Army counterparts and we did a compressed cadre due to the time constraints put upon us by our civilian jobs and normal lives with girlfriends, wives, and kids.

10 days instead of 6 weeks, all compressed down to picking up the drills as fast as possible, running through the procedures of training with the guns dry and no ammo on a hard-standing in bright sunlight, to a final night shoot where if you’re not paying enough attention the barrel will turn white and then translucent and start drooping.

I never went that far but I did have one red hot barrel that had definitely had more than the recommended 400 hundred rounds through it in 25-round bursts and sent a cloud of steam shooting up from the waterlogged grass.

The steam mingled and swirled with the clouds of smoke from thousands of rounds of fired ammo and the Schermuly Parachute Flares being shot off to give us enough light to range in the gun, encased in its tripod carriage mount, and then fire 200 rounds every minute at targets that we would have one minute to set up for, find with our iron sights and then through the eyepiece of the C2 unit in it’s own tripod mount before obliterating it in a hail of Full Metal Jacket bullets.

We were expected to attain the standard times for the cadre whether shortened timeframes or not and that’s what we did.

We learned to take between 2 of us; 1 Gun at 11kg, 1000 rounds of link at 25kg, Tripod at 13.kg, 3 Spare Barrels, one C2 Sight Unit, Buffer Plate, Cleaning Kit, and Spare Spare Parts Wallet at about 14kg plus our own standard infantry kit as well and get a gun into position and firing rounds on target in under a minute, changing hot barrels for fresh in under 9 seconds at night under swinging arc lights in the sky which threw shadow and glare everywhere.

That’s an extra 60kg between the gun team which has to be carried into position on top of personal weapons, ammo, and kit.

Knuckles skinned and starting to get infected from spending hours lying in dirty rushing water, numbed hands not feeling the sharp corners as you rack the cocking handle for the thousandth time and your Kevlar helmet pushes forwards over your eyes because your daysack has slipped forwards and smacked it down.

Being taught to run four gun teams by Wally and the two Sgts who were both called Jones, one tall and one short, sending thousands of rounds downrange and seeing the splash from impacts and still burning tracer rounds ricocheting off into the sky whilst managing the ammo states and switching individual teams onto their own targets, cross-firing the streams of glowing balls and overlapping their beaten zones to ensure maximum effective destruction.

We were taught communication and situational awareness by being handed control of the destructive capabilities of a British Army Gun Line and how to utilize it effectively.

We learned and sweated and we laughed in pain as we smoked cigarettes and drank cheap French beer at night whilst slathering antibacterial cream into our bleeding limbs after spending literally hours cleaning the parts each night, ready for the next day of pain and exhilaration on the ranges.

Later on, that year when in Germany and preparing to deploy to Iraq, I had one of those little moments of pride when a Corporal who’d done the Guns Course himself was running guys through the GPMGs Normal Safety Precautions.

There are so many procedures on so many systems that you blank sometimes, and he looked up to us and asked for my input as he knew I was guns qualified; I answered him and he continued on with the lesson.

Anyone can be a source of knowledge and the good leaders I’ve met will ask for assistance every time and the bad leaders never ask at all.

Who do you want to model yourself on?

Who’s consistently doing the same thing but expecting a different result each time?

Look to be the example that you want to follow and then start acting and learning how; a binary choice backed by knowledge, mistakes, lessons learned, experience and just living the life.

This first appeared in The Havok Journal on August 26, 2021.