Combating Cancer: The Potential And Promise of CD47 for Breast Cancer and Beyond
by Tyler McCune

“I keep dreaming of a future, a future with a long and healthy life, not lived in the shadow of cancer but in the light.” -Patrick Swayze

If your body is made up of cells, then you’ll want to read this article.

According to the American Cancer Society’s “Cancer Facts and Figures 2014” approximately 13.7 million Americans with a history of cancer were alive on January 1st, 2012.  What’s more, the American Cancer Society predicts that there will be an additional 1.7 million new cases of cancer in 2014 – so, chances are either you have been diagnosed with cancer or are close to someone who has. Emerging cancer treatment research may have found a very promising drug target that can be used to effectively combat nearly every type of cancer.  The results were published by Stephen B. Willingham, et al, of the Institute for Stem Cell Biology and Regenerative Medicine in the April 2012 issue of Proceedings of the National Academy of Sciences of the United States of America (PNAS)

Terminology is arguably the hardest part of oncology (er, the study of cancer).  If you have a grasp on the language being used, it’s easy to keep up.  If you don’t have an understanding of the vocab, though, conversation is about as easy as sending telegrams using cans of alphabet soup.  So before getting to the greatness of the research at hand, it is necessary to go through a quick crash-course of terms, beginning with the most important of which: cancer.

The term cancer is one that is often misused or over-applied.  Cancer as defined by Mosby’s Medical Dictionary, 8th Edition, is a “neoplasm [tumor] characterized by the uncontrolled growth of cells that tend to invade surrounding tissue and to metastasize to distant body sites.”  The definition makes it sound much more complicated than it really is.  Cancer is simply the unregulated growth of a tumor.  Growth in biological terms means the increase in the number of cells, while a neoplasm or tumor is any abnormal growth of new tissue.  A tumor can be of any size from two cells to two million cells. A tumor can be non-disease causing or pathologic.  A tumor can stay in one spot or metastasize.  A tumor can be classified in many ways, but it is cancer when its growth is not controlled by the immune system.

In fact, if you’ve ever said “benign cancer,” don’t do it again; that term is an oxymoron. To be benign means to be non-cancerous.  The moment a tumor is able to evade the immune system and grow independently, it is cancerous (and thus no longer benign).  Keep in mind, though, that if you have a benign tumor, you still have a tumor and it can cause its own problems.  Interestingly, almost everyone already has a tumor or two of their own in the form of a mole (stereotypically on your back).  Moles are caused by excessive growth of skin pigment cells, melanocytes, and are technically classified as tumors but they aren’t cancer because their growth is still in check.

Cancer begins as a single cell that accumulates enough genetic mutations which, combined, give it the ability to reproduce very quickly.  This parent cell then creates many, many daughter cells that become the tumor.  Eventually this tumor will mature enough to where it will metastasize, or shed cells that will grow in other areas of the body.  Mutations can be introduced by a foreign pathogen like a bacterium or a virus, an environmental factor like UV radiation or radon in a basement, or a chemical factor such as cigarette smoke.  Any chemical that causes a break or mutation in DNA is a mutagen, and any mutagen that is likely to result in cancer is a carcinogen.

The label also does not mean that only California recognizes the chemical as a carcinogen. Other entities might recognize certain dangers too but haven’t studied them enough to make their own claims, so they just let The Golden State cover it.  The tradition is the result of Proposition 65, aka “The Safe Drinking Water and Toxic Environment Act of 1986” passed in California in, you guessed it, 1986.  This legislation remains the strictest standard of warning consumers, and other states follow suit on some labels because it’s better to err’ on the side of caution.  If a warning suffices in Cali., it suffices everywhere.

“Enough of the vocabulary,” you’re thinking.  Well, in case you’re bored at work one day and have the internet, simply Wikipedia “cancer” then follow the blue links around.  There is so much more to oncology that can’t be covered in the scope of this article and I guarantee you’ll kill off hours before you or your boss knows it. With all of the above definitions in mind, a brief explanation of medicine’s current understanding of cancer is in order.

At first, it was thought that a cancerous mutation was singular and so severe that it actually produced distinct cells that made up the tumors.  It was then discovered that the cells that make up the tumor are really “self” cells that aren’t dying.  Further investigation revealed that the cancer cells aren’t dying because they’ve somehow mutated in such a way as to avoid apoptosis a.k.a. programmed cell death.  It was also found around that time that it wasn’t just one mutation causing cancer, it was many of them.  For a while, people were unsure why the cells didn’t die when they were supposed to.  It was then that it was discovered that cancer cells are able to ignore signals from key players in the immune system like macrophages, natural killer cells, and cytotoxic T-cells.

Nowadays, we see that cancer cells are able to evade our own immune systems because they overexpress proteins that identify them as “self” to help them avoid apoptosis.  Most recently, scientists have found that the overexpression of cancer-causing genes (oncogenes) actually develops into an addiction the cancer cells have.  Some researchers have even found that limiting expression of oncogenes in cancer cells has effectively limited tumor growth.  Typically, an oncogene addiction is accompanied by the down-regulation of tumor suppressor genes, a phenomenon that itself is thought to be just as important as an oncogene addiction.  The true underlying cause of cancer is still unclear, but targeting oncogene addictions in cancer is a legitimate effort. 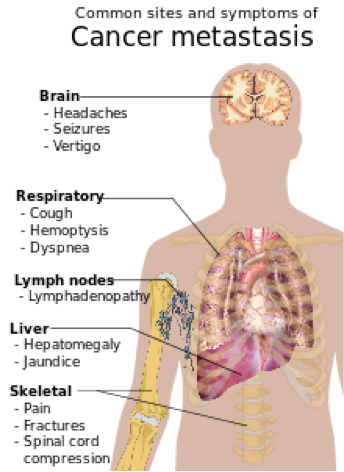 Researchers, led by Stephen B. Willingham at the Institute for Stem Cell Biology and Regenerative Medicine and The Ludwig Cancer Center, have found a key oncogene that they believe, if suppressed, will stop tumor growth.  The CD47 signal regulatory protein alpha (CD-47 SIRPa) is one of the proteins all cells use to self-identify to the immune system.

Initially, these researchers found that cancer cells are producing the same proteins, but at much higher rates.  They found that “on average, tumor cells expressed ~3.3 fold more CD47 than corresponding normal cells.”  They even found that the amount of CD47 is often a predictor of survivability of the individuals with cancer.  With those data in hand, the research team went about seeing what happened when they messed with the amount of CD47 expression.

Using targeted anti-bodies, the researchers are able to bind the CD47 proteins and effectively silence the self-signal and hopefully induce phagocytosis (destruction) by the immune system.  A few representative human cancers were chosen for the experiments then grafted into mice: ovarian, breast, colon, bladder, glioblastoma, hepatocellular carcinoma, and prostate.  The team found four key things when targeted anti-CD47 antibodies were applied to the various tumors.

First, anti-CD47 antibodies are able to prevent the “don’t eat me” signal of CD47 proteins, and thus induce phagocytosis of the representative cancers in mice.  Furthermore, it was found the anti-CD47 antibodies inhibit tumor growth (remember growth is an increase in the number of cells) in mice.  Third, anti- CD47 antibodies prevent human tumor metastasis.  Lastly, no acute toxicity to mice was produced in immune-competent hosts even when anti-CD47 antibodies were spread systemically.  These four things combined mean that someday soon, if you are diagnosed with nearly any cancer, you could go to the pharmacy for a CD47 pill that will cure it.

Unfortunately that day might not be as soon coming as we might hope.  Drug development is a very long process, as it should be, and a reality described above could be another thirty years off.  However, the implications of the results found so far cannot be underestimated.  The ability to treat cancers as if they were the common cold represents one of the largest advancements in healthcare and technology, in the history of multi-cellular life.