HomeCultureI Watched The Wall So You Don’t Have To 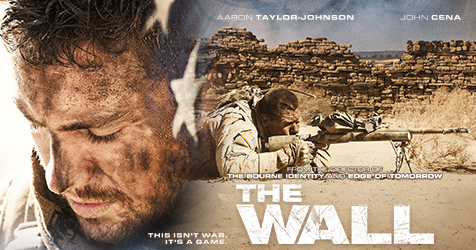 This first appeared in The Havok Journal on December 15, 2018.

I’ve done a lot of shit because it’s late, I’m bored, and there’s literally nothing to do on or around Fort Bragg after a certain time of night unless you don’t mind taking your chances with hepatitis.

If you’ve been there, you know exactly what I mean. Yeah, there are bars and strip clubs, but once you’ve gotten that first dishearteningly apathetic lap dance from a Crystal Methodist stripper at Sharky’s, you’ve pretty much been through the whole Fayetteville experience. After that, you either realize that you hate yourself and search out even more ways to puncture your sense of self-worth, or you concede that maybe staying in the barracks on a weeknight isn’t all that bad.

This was the situation I found myself in recently: on orders for CLS class, nothing to do but read and drink and smoke and drink and maybe drink a little more. It was a quiet night, all things considered. By that point, everyone had mostly gotten past the loud stage of drunkenness and had settled down into seriously killing brain cells, so the bay was relatively quiet.

And then I heard the unmistakable sounds of a movie echoing from someone’s phone from across the bay. The words on my phone screen were getting too blurry to really follow, so I said what the hell and braced myself for some human interaction.

The movie in question was The Wall. No, not the feature-length music video for the Pink Floyd album that everyone pretended to understand in high school. This was the 2017 movie starring Aaron Taylor-Johnson (Kickass) and John Cena (that ripped wrestler dude who kept interrupting cat videos on Facebook for a while). It was directed by Doug Liman, whose previous works include Mr. & Mrs. Smith, The Bourne Ultimatum, and Edge of Tomorrow.

The premise, so much as I can remember thanks to Wild Turkey, was that two American soldiers are lost in the desert, pinned down behind a broken-down wall by an Iraqi sniper. They’ve both been shot, they’ve no food or water, and, being the desert, it’s freaking hot.

What follows is what I’m guessing was supposed to be an intense psychological thriller. The sniper somehow, improbably, found his way onto their net, and proceeds to taunt Kickass (I cannot remember the character’s name and I refuse to look it up), who was doing his very best Southern bumpkin impression.

There are no two ways about it: this movie was 90% people talking over a radio. Occasionally, bullets pop off. Done properly, you can take a situation like that and make one hell of a thriller. I mean, seriously. There’s a lot that can be done with that premise, and to be fair, the movie didn’t entirely waste it. Listening to the sniper and Kickass exchange threats, insults, and stories was occasionally interesting. They actually felt like they were building a rapport at points.

But then it flushes it all down the toilet because we can’t have nice things.

I won’t ruin what was, allegedly, the film’s climax and ending. It was so heavily foreshadowed, you could put it on a map and a blind 2LT could have used it for a landmark. And, despite that, it’ll still piss you off when it happens. Any goodwill The Wall had built up before that point was washed away in the span of a couple of minutes.

But, looking back, it wasn’t the fact that The Wall wasted an hour and a half of my life that most annoyed me.

See, what pissed me off the most was the fact that it continued an increasingly popular Hollywood trend of portraying soldiers as broken, PTSD riddled war junkies. See, the main character had done a naughty at some point, and he felt all broken up over that. That was his motivation for coming back to Iraq, by the way.

In Hollywood shorthand, PTSD=guilt. It’s not enough to try to make your military characters complex human beings with a diverse array of motivations for why they do the things they do, oh no. They have to have PTSD, and it has to be because they’re guilty of something they’ve done.

The audience is meant to interpret that guilt as being symbolic of the wider guilt that America is supposed to feel about the Global War On Terror because war is bad and George Bush was a meanie. By using PTSD as the visual representation of that guilt, they try to humanize these characters the only way how: by making them feel remorse for the horrible, rotten, no good things they’ve done.

Because that’s the only way they could comprehend the existence of the American veteran: like a broken down monster who realizes that they’re evil imperialists or whatever the buzzword of the day is, who has to struggle to regain their humanity.

I’ve known plenty of vets who struggled with PTSD for one reason or another. I’ve even known a few who struggled with guilt. Usually, the guilt was over weird shit they jerked it to out of sheer boredom though, not some eternal despair because of that one time they blew up an orphanage.

And yet, Hollywood keeps insisting that we should feel terrible over the stuff we’ve done. They might not say it, but they’ve shown us, time and time again. They show us shitty movies about shitty people who pay the price for doing shitty things. They tried to show us again with The Wall.

All things considered, I think you’d be better off skipping this one and sticking to the Pink Floyd version.