Is Die Hard a Christmas Movie?
by Clayton Rushmore

Ever since Die Hard first came out, there has been a debate about whether or not it is a Christmas movie, or just a movie that takes place at Christmas.

For me, the answer is simple. We, the collective Americana, have made it a Christmas movie, whatever the makers of the movie intended (it was released in the summer of ’88). I can watch Die Hard any time of the year, but the movie always makes me think of Christmas.

Well, to begin with, Die Hard, at it’s essence, is about a man selflessly giving and sacrificing for his loved ones. What’s more Christmasy than that? That sentiment definitely gets me in the Christmas spirit.

But, more importantly, it’s the soundtrack.  I would argue the soundtrack, above all, makes Die Hard a Christmas movie. There’s no way you’d have Winter Wonderland, Christmas in Hollis, Ode to Joy, Let it Snow!, and Jingle Bells on a non-Christmas movie soundtrack. These songs are inextricably linked to Christmas, you hear these songs and you know what time of year it is. Music has a unique ability to create associations in our minds and anchor memories the way almost nothing else does.

The soundtrack is what makes it about the holiday, not just taking place during a holiday. American cultural identity is tied to songs like Jingle Bells 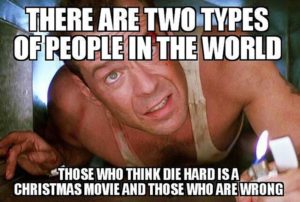 (as annoying as I find that song). People in Phoenix and Tampa will only have a white Christmas in freak weather years, but when they hear “Let it snow, let it snow, let it snow!” they know it’s Christmastime. So, when I hear “Let it Snow!” in a movie, I know it’s a Christmas movie. These are basic cultural cues we all fall in line with. When I see pastel watercolors and bunnies and chicks, I know it’s Easter time. When I see lots o’ green and I hear drunk idiots singing “When Irish Eyes Are Smiling” and lining up outside Irish bars to pay double for Bud Light with green food coloring in it, I know it’s St. Paddy’s Day.

And when I hear Jingle Bells in a movie, it’s a damn Christmas movie. Bottom line.

The soundtrack is what makes the movie. This is a fundamental of movie making. Die Hard’s soundtrack is all about Christmas. Ergo, Die Hard is a Christmas movie, despite what Bruce Willis says.