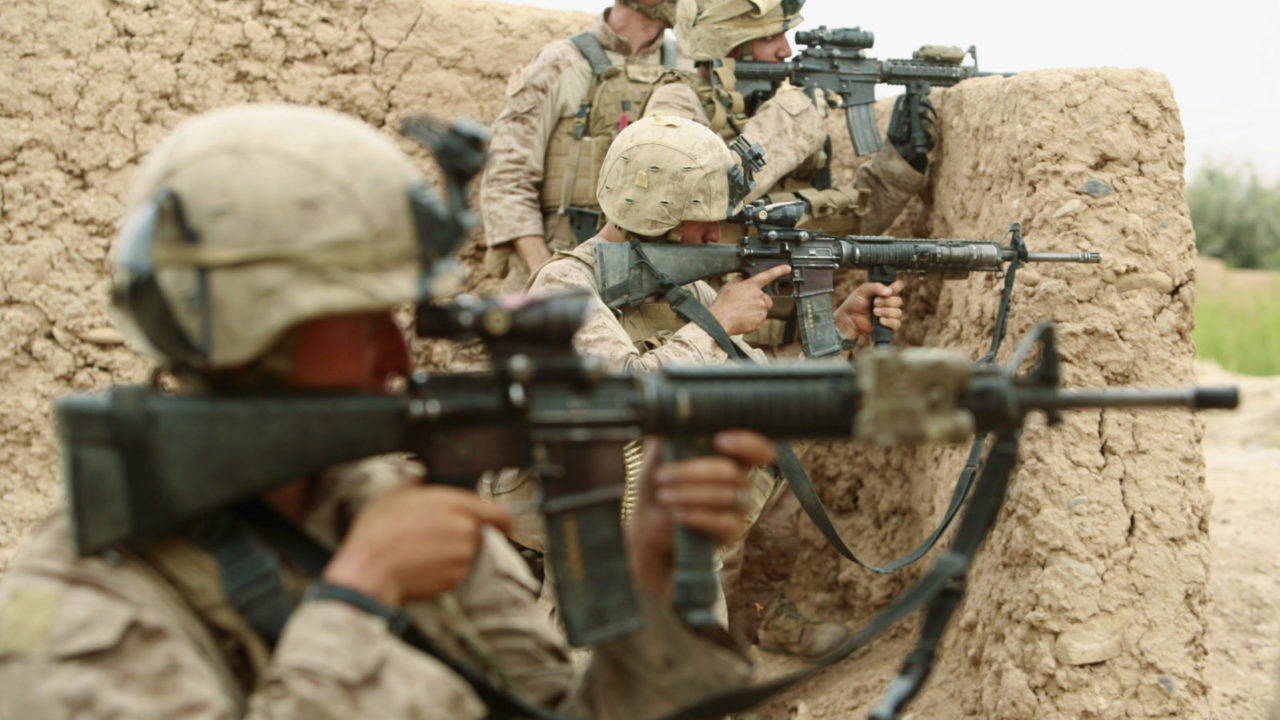 There is an unfortunate disconnect when it comes to the American perception of war. The average American seems to think that war is conducted by drone strikes and jets dropping precision munitions on folks living in tents. Yes, we do kill our enemies this way but it is not the only way. Unfortunately what it does is paint a false picture of the reality of armed conflict. 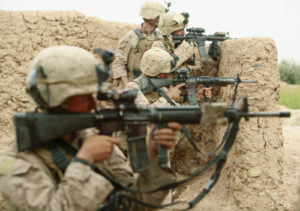 While we have many advanced weapons at our disposal, war is still essentially the same. To be decisive we must place American rifleman in range of opposing and similarly armed counterparts.

Violence on this level has not changed, only the popular and public perception of it. Americans at home want their wars run clean and cold, through the digital optics on board fast moving airframes delivering their ordinance. This is a problem, because this is not how war works.

Let’s take a look at some recent conflicts, starting with WW2. Often looked back on with nostalgia and reverence for being the last time the good guys fought real bad guys. The shine of metallic P-51 Mustang fuselages and flashy nose art can be distracting from the fact that our grandparents were killing each other by any means possible. In this conflict there was no mistake about the goal, or the nature of the conflict. Everything was a valid target, be it soldier or civilian. High level bombers rained high explosive and incendiary death down on the civilian populations of their enemies.

The will of the enemy needed to be broken, not just the fighting man and materiel. We understood that in this war, the violence nob needed be cranked up to 10 and then snapped it off. We nuked two cities just to end the war and to prove a point. The folks back home had no idea of the level of brutality that men were inflicting upon other men. The American idea of war at the time remained this, that what must be to end the war should be done.

Fast forward a few years and we are now in Vietnam. Not only politically volatile but socially as well; images and video of the soldiers in combat were being broadcast into the living rooms of Americans at home. This didn’t sit too well with the American public as Mom and Dad got to watch their sons being blown apart on the evening news. The nation, for the first time got to see the true face of war. This had consequences of course, as this apparently wasn’t how the young folks in America wanted to spend their summer vacations. They could turn to those images and see what was waiting for them in the jungles of a place thousands of miles from home.

Politicians ran the war as popular support waned with every image of napalm burned children, and GIs in various states of messed up. The soldiers suffered as their ability to make violence was limited by restrictive rules of engagement, stemming from indecisive political meddling. We all know how this story ends, yet it started a new chapter in the way Americans fight, and their perception of warfare. Americans just didn’t realize that what they were seeing was not new.

As a consequence of Vietnam the American public came face to face with the brutal nature of warfare. Atrocities committed by both sides were exposed and the scars from these events were left on the heart of the nation. We abolished the draft, and the military industrial complex continued working on smarter munitions. Weapons were being designed to save lives; if you don’t see the irony in that statement then I can’t help you.

The idea that war and its magnitudes of violence could be minimized and victory still attained over a determined enemy were easily swallowed by the public. Americans watched as laser guided bombs and cruise missiles devastated the Iraqi army in Gulf War I and we all swallowed this as proof. We were in and out, victory accomplished with minimal casualties on our side. What we didn’t see was that the violence was still there. This factor however was mitigated by the disintegration of the Iraqi military. In the near future this would change.

We now find ourselves in the present day, 18 years into a conflict that should have been over in less than half the time. In WW2 our goals were clear: victory at any cost because there was no alternative. The violence needed to accomplish this was understood by all who participated. If only America understood this necessity now they would know why we are still fighting the same enemy with no victory in sight. America has confused the pop culture idea of war with its reality.

War has not changed; only the popular perception of it has. We are bombarded from youth by images and concepts of what war is or should be. So there is an understandable bit of confusion when the military is producing weapons to reduce damage, at the same time politicians are selling war as a thing that can be limited to preserve the image of the American peace keeper. These things contribute to the American version of war, ideally bloodless affairs where only the enemy gets killed and the harming of civilians is unacceptable.

Here is the reality of warfare: people die. What I mean by people is this; that combatant and non-combatant are killed the same. War is the breaking of bone, of high explosive liquefying solid organs. It is the ignition of organic matter through the heat of explosive chemical reactions. It is the boot heel and the fist. We have been plagued by the notion that warfare can be limited and in doing so we have diluted our ability to achieve victory.

War is a destructive process and our ability to creatively destroy our fellow man is unrivaled. Warfare as an extension of politics should be the last resort; I do not seek to glorify it. It must be conducted with the utmost violence in order to achieve the goals set forth. If this is not the intent, and conflict is entered into with limitations and lack of vision, then we will find ourselves repeating the mistakes of the other conflicts we so often find ourselves half-heartedly engaging in.

We draw these conflicts out because we are fighting according to a set of culturally imposed rules that no one else is playing by. Do you think ISIS shares our same view on warfare? This is not a gentleman’s game. Hang up your powdered wig and 18th Century ideals of fairness in war.

What I ask is that we as a nation face this reality. If we send our soldiers into harm’s way let them do what needs to be done to preserve their lives and to deprive the enemy of theirs. Wars are won in the will and we seem to be lacking the conviction to rob the enemy of theirs. If you don’t want our warriors to be plying their trade then do not send them.

This is a conversation that must happen as we face an inhuman enemy, capable of horrific violence, and who is single minded in their pursuit of total war. What can be gained by a more realistic view on war I cannot say? Perhaps a diminished propensity to rely on it for our answers, and when used it is done in such a way as to end it swiftly and decisively.

This first appeared in The Havok Journal on October 7, 2016.