His boots are laced tight, double knotted and the excess tucked in.  The tan suede has been rubbed bald in some places from the hundreds of miles they have traversed. The tread on the bottom is not quite as fresh as it was when he first put them on, but they fit his foot like a fine glove. They might not look pretty, but then again few things do that have been where those boots have been. They bear the weight of a man that has bore many burdens.  His legs push the Vibram soles into the metal floor of the aircraft, trying to stabilize himself as the bird bumps its way through the night air.

You would think it would take a man twice the size of him to hold up the amount of weight he had strapped to his body. He’s much like a Spartan sword though – not very big, but strong and lethal. He’s twisted ankles, broken bones, been shot at, and blown up but still he stands here tonight among his brothers, basked in an eerie red glow. He volunteered for this. He takes pride that he does what so few others have the stomach to do.  He knows that most do not have what it takes to exit an aircraft mid-flight. He knows even fewer can do it in the face of enemy fire snapping by their ears while descending into an unknown land.

It’s not that he’s scared, but rather he has an immense amount of healthy respect for his chosen profession. He doesn’t like to think of it as dangerous, but maybe not entirely safe either. Regardless, he is here now. His calloused hand grips the yellow fabric that connects him to a steel cable, his lifeline. At this moment the yellow fabric is merely responsible for helping him keep his balance, but in less than ten minutes it will have his life in its proverbial hands. His hollow eyes blankly stare ahead, quietly saying a short prayer whilst gazing at the glowing luminescent tape in front of him. 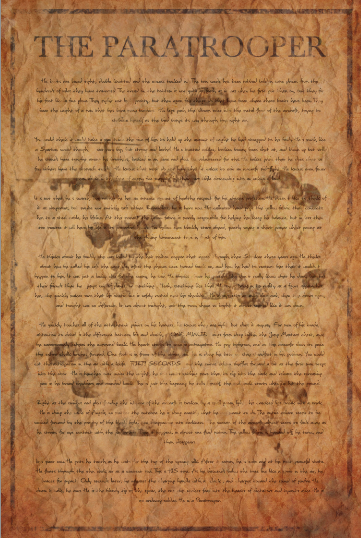 He thinks about his buddy who was killed by the hot molten copper that ripped through their Stryker three years ago. He thinks about how he called his wife the next day after the phones were turned back on, and how he had to reassure her that it wouldn’t happen to him. It was just a lucky day for the enemy, he said. He thinks about his parents who don’t really know what he does, but tell their friends that he “jumps out of planes, or something”. Yeah, something like that. He snaps back in to reality as a figure approaches him, who quickly makes sure that his static line is safely routed over his shoulder.  He always gets an adrenaline rush when the doors open, and tonight was no different. It was almost midnight, yet the moon shone so bright it almost seemed like it was dawn.

He quickly touches all of the attachment points on his harness, he knows they are right but does it anyway. For men of his trade, attention to detail is the difference between life and death.  “ONE MINUTE” rings from deep within the Jump Masters chest, and he ceremoniously echoes the command back. His heart starts to race in anticipation. His grip tightens, and as the aircraft slows its pace the entire chalk lurches forward. One foot is in front of the other, and he is doing his best to stay steadfast in his position. You could cut the anticipation in the air with a knife. “THIRTY SECONDS” and the entire column shuffles forward a bit as the first man steps into the door.  He is hunched over under the weight, he now wants nothing more than to slip into the dark and release the screaming pain in his broad shoulders and rounded back. This is just the beginning he tells himself, the real work starts when we hit the ground.

Right as the ominous red glow flooding the interior of the aircraft is broken by a small green light, his cracked lips break into a smirk. He is doing the work of Angels; no matter the outcome he is doing exactly what he was meant to do. The entire column seems to be sucked forward by the gravity of the black hole, men disappearing into darkness.  The scream of the aircraft almost seems to fade away as he strains for eye contact with the jumpmaster. Then it happens, in almost one fluid motion. The yellow fabric is handed off; he turns, and then disappears.

It’s quiet now. He grits his teeth as he waits for the tug of the opening silk. After it comes, he is calm and at his most peaceful state. He floats through the thin dark air as a content soul. This is HIS time. As he descends below the tree line like a spirit in the air, he braces for impact. Only seconds later, he releases the charging handle with a ‘clack’, and charges toward the sound of gunfire. He doesn’t walk, he runs. He is the bloody tip of the spear, the one who strikes fear into the hearts of dictators and tyrants alike. He is no ordinary soldier. He is a Paratrooper.