HomeCultureKilled in Action: “The Inventory” 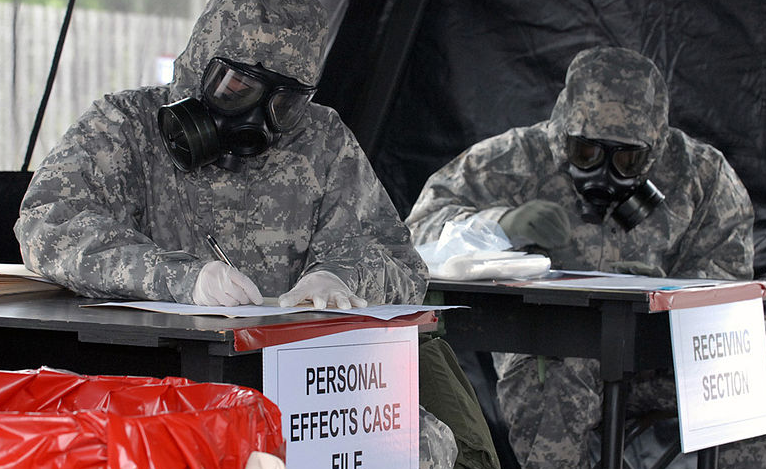 It’s a hard thing to take good, honest, decent men and women and teach them to kill. It’s harder to send them out to do it. It’s harder still when some of them fall and the necessary tasks of the aftermath of battle force you to dig through their lives. The last thing done by the unit, by the leaders?

As a soldier, I knew my job and I knew that some things come with the territory of leadership. Soldiers conduct inventories almost daily. We count our weapons, vehicles, supplies, gear, and property. But when we lose someone, we have to record their lives, hopes, dreams, and personal worth. We dig because we must and it is painful.

As a young Specialist, I attended a Graves Registration course. I sat through the training and learned what is expected. I learned that even a successful battle has casualties. I learned that there are still tasks that must be performed for the fallen. Years later — I learned the cost of those tasks.

War is violence and death. Destroying the enemy by direct fire, indirect fire, bombs, and even for some, by cold steel is what soldiers do — ours and theirs. It hurts when you lose someone whether they were a soldier you led, a friend, or even possibly family. In our 13 years of war, we’ve lost many. Because of marriage or some other circumstance that had relatives in the same units, some have fallen next to kin. Losing anyone hurts.

I capitalized ‘The Inventory’ because it deserves it. It’s typically the unit’s last view of one of their own. You comb through the personal effects of the fallen. You record everything in the tiniest detail. You take the time to do it right. But the pain and agony of that moment stretches out and ages you exponentially by the time you’re done. It takes hours — you feel like it took years.

You pick through the remains of someone’s life. The good. The bad. The potentially embarrassing. You must look, must see in order to account. It hurts.

The first requirement is accuracy. Nothing can go amiss. The second is to remove equipment that’s government property that will not be returned to the next of kin. The third is to make a complete and detailed list of that which remains.

Personal effects are set into three categories for disposition, delivered to next of kin, sold if necessary or directed by the estate, and destroyed.

That’s the truth. Some of the personal effects of the fallen are destroyed. There’s no reason to add to the pain and a Summary Courts-Martial Officer (SCMO) will determine the disposition as necessary.

The inventory begins with violence. The locks have to be cut and somehow that simple act begins the assimilation to the idea that they are gone. In the military, cutting locks is usually not a good sign in general, and this, well this is something else. A new level of unpleasantness begins when that lock is cut. I have cut locks before for either AWOL soldiers or simply misplaced keys. This lock is different. The snap as the bolt cutters shears the metal like a clarion call to opening the soul.

You’re forced to pry into the lives of people you may only have known in a cursory fashion or someone you may have thought you knew well. Now the truth, or at least as much of it as possible, will be revealed. The only mail you don’t read is mail from home that has not been opened. Everything else is reviewed.

You see a photo and you record, “Picture, 8×10, frame, silver in color, image of a female.” On the back of the picture you find writing, so you must record what’s written to ensure that photo is positively identified, “Dearest love, I miss you… ” The feeling of that statement, knowing she’s now in the worst misery a person can suffer hits you. There’s nothing you can do, but go on. Each discovery like a paper cut on your heart.

On and on, you go through every letter, photograph, file, belonging, until at last they’re all written down on sanitary lists with as much neutrality as you can muster. You might not have shed a tear, but you’re screaming inside. You peel the pages of another person’s life and you know them.

You hurt when you inventory something that has your name on it. A letter home where they mention you is especially dreaded. There is no win. If they hated you, now you have red hot spikes to the dirty feeling you already had. If they admired you, you wonder again how you failed them.

It has to be done — but damn it hurts. If possible, a unit gets someone from outside to conduct The Inventory, but that’s not always possible.

Everything is accounted for and everything goes into containers to be delivered to the personal effect depot. There it is inventoried again. The dirty clothes are washed. Those items deemed inflammatory are removed. Then they’re all inventoried again, before beginning the packaging for the final trip.

It does a family no good to find even a treasured picture with blood on it, or worse a bullet hole. It helps no one to see that soldiers find sources of entertainment in less virtuous areas. There are other things that might be removed as well.

A letter written, but not sent saying that the relationship is over will be removed. A picture of someone in a compromising position that’s not the spouse serves no purpose, but to wound an already damaged soul even further. Those things are understandable because they are done to protect.

But there’s no protection when you pack away a teddy bear sent in the earnest hope that it would keep a father safe being sent home in a box, that failed in its duty. There’s nothing but hurt when you see a good luck charm that ran out of magic. Inventorying the photos of a life destroyed is a special kind of hell, because most are happy times, times now gone.

Why am I telling you this? Because it needs to be said by someone and so I will. The inventories I did still hurt. Mortuary Affairs personnel suffer an extremely high percentage of PTSD. It was time to include them and recognize them for the soul-scourging work they did. They received no glory but faced the aftermath of battle instead of the battle itself. The only time they’re acknowledged is when they fail. But they did a job, strove for perfection, gave honor and respect, and paid a heavy price for it.

They took care to get our Brothers and Sisters home and I thank them for their work.

I know some of them. I remember a near fistfight over which team was going to render the Honor Guard because it was one unit’s job that night, but the casualty was from another and they wanted to be there too. Emotion was too high for simple cooperation. They, who never fired a shot in anger, would have fought each other to properly and respectfully honor the fallen because it was their mission and their need.

To those who did The Inventory, and God bless you. If you had more than one, it’s okay to hurt. Honor the Fallen and remember them for they will walk this way no more.

To those who lost, this story is just a piece of what happens behind the veil of war. When we return to you, those you have lost and the things that go with them.

Army Reserve soldiers wearing chemical suits of the 673rd Quartermaster Company, 316th Combat Support Battalion prepare paperwork at the Northwest Community Hospital, during Exercise Red Dragon 2011. In the event of a catastrophe, these soldiers would identify bodies and log in personal belongings of people who suffer fatal injuries during a disaster. 10 June 2011. Source.