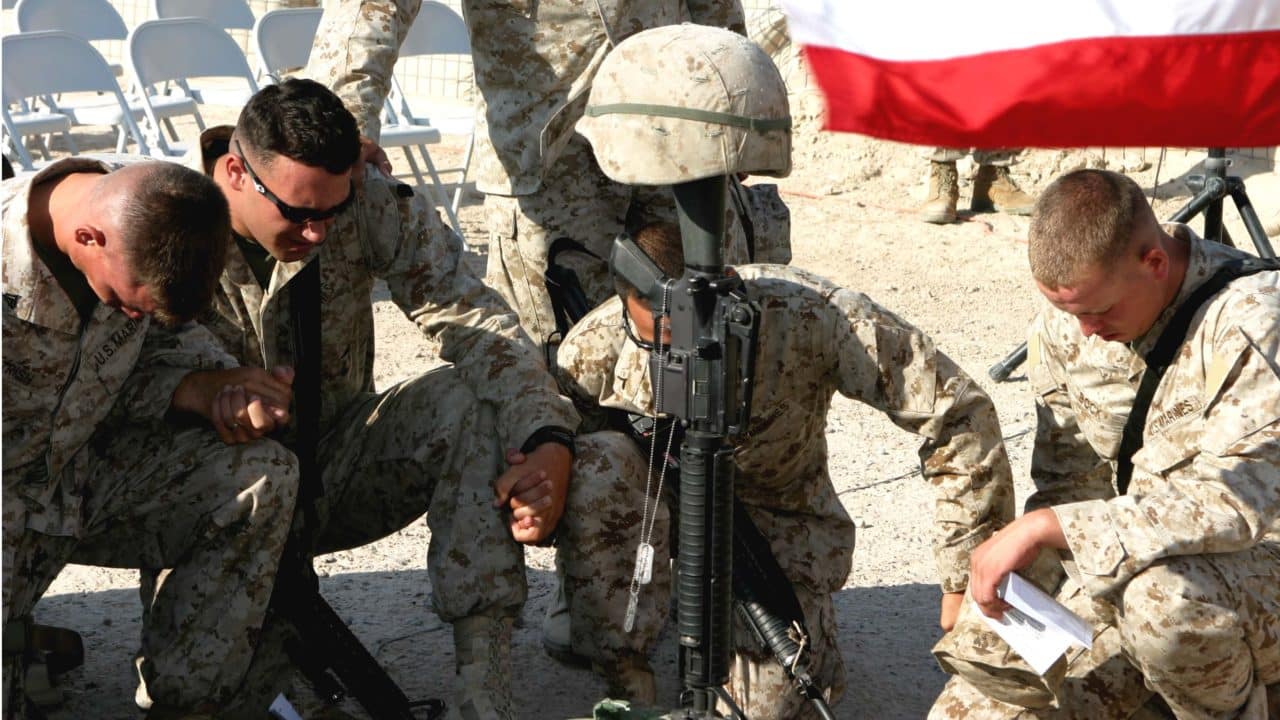 “I encountered someone who showed me what true courage is. I thought I understood courage, I was wrong.”

I know the war affected me.

I had my issues with it for a while but I have managed to climb out of the abyss of grief. While the casualties of the Iraq War and the Afghanistan War were light in comparison to our Nation’s history, each and every one of those deaths was poignant and painful to the families of the fallen.

I think we all know someone who was lost. I encountered something a short while ago that took me time to process and now I would like to share it.

I know what it is like to lose a comrade, a friend, a peer. I have lost family to age and disease. I do not want to imagine what it would be like to lose a loved one close to me, my child, or my spouse; to have them snatched away in a heartbeat. I do not have the courage to delve too deeply into that emotional landscape of nightmares.

I encountered someone who showed me what true courage is. I thought I understood courage, I was wrong. In an airport before Memorial Day, I came to know courage in a different way.

I listened to a very personal story of a young woman as she spoke about a Soldier, her Soldier. I did not know her, nor did I know whom she was speaking about and I was about to move on, embarrassed at invading her privacy no matter how inadvertently when I caught the first glimpse of pain in her eyes and heard the tremble in her voice and I stopped.

I had only paused for a moment to check my phone but I stayed, unobtrusively observing and listening and I began to comprehend as I felt her pain and the determination, the courage she had, to keep talking as memory lashed her with love and hurt in equal measure.

She was talking to a young teenager about her husband and his father. She described to him every detail and the love on her face was obvious as she related to this young man the image she was building for him with her words, the image of a man, whom he would never meet for he was lost in combat seven years before.

I was immersed in her story as she used her love and her pain to describe the man that she remembered to a boy who would never know.

She described times that his father had lovingly held him so that he would know his daddy loved him, cherished him, and did not part from him willingly.

I still feel the image that she created for me, an unnoticed bystander, and I feel it now as I type and I begin to understand courage.

Courage is something we must have in the military because it keeps us steady when fear wants us to run.  But we have an enemy we can face and fight. Our courage has a target that we can resolve.  We can apply our skills, our training, our weapons, and we can win the day.

How much more courage do you need to keep fighting every day to survive and live through the pain of a shattered life? How much courage did this woman show, to pass on the legacy she remembered of a man who she loved and lost, to a son who would never know him? How much courage must you have to face not an enemy, but loss and loneliness, and the only weapon you have, memory, cuts you deeply each time you wield it?

Courage is a mother who raises her son alone and works daily to remind him of the father that he will never see and will never know. I tried to imagine my wife telling my daughter that I was gone and just reaching for the emotional chasm that caused such pain and fear that I had to back away lest I lose myself to imagined grief.

The courage to face the grief, the pain, the loss of a husband, a father, a son, a brother, a wife, a mother, a daughter, a sister, ripped away by the cauldron of war. The courage to tell others, to pass along the legacy of those who are gone lest they be truly forgotten, and to keep telling their stories so that the memory remains fresh all the while facing the pain which remains just a sharp as it did that day when they were told.

And in the telling, face each memory never knowing which might be too much, might awaken their own loss to the point that they feel they cannot go on, facing those images of the heart and mind that hurt because they remind them of love.

Today is not Memorial Day, though that is when I heard the story of a man who served and fell.  But each and every day, there is a family somewhere who has to face an anniversary of loss and keep moving forward in spite of the pain.

If you know them, let them know what you know about their loved ones. Face the pain with them and celebrate the life that is gone. You may have lost a comrade. I ask you to remember that person, to document what you know, so a father and mother can know their child through your eyes, a husband or a wife can know the person you knew, a child can know the parent that they will never meet, brothers and sisters, the side of their sibling that you knew though they might not have.

If you are doing that already, you have my thanks for keeping the lost alive. If you are not, I humbly ask you to try. Let a child look into your eyes or read your words and learn about the person you knew.

A life is more than a scrapbook, a uniform, a set of dog tags. A life is the humor, the anger, the seriousness, the dedication of someone who is never to walk this way again.  We shy away from this because it reminds us of our own but we can honestly do not less or we are in danger of forgetting.

It will take courage to speak, courage that you have to dig deep to find because you have to deal with your own pain. But I think we must if we can. How many stories are lost for want of the courage to tell them?

Can we do less?  A family who lost has no choice but to face the future that has been altered beyond recognition in pain and grief. And yet a wife had the courage to bring a father back to life if only for a short time to her son that would never know him.

They must forge ahead facing a future that is indelibly changed. Tell them a story about the person you knew so that they remain alive in memory if only for a short while until maybe, we can all know who was lost instead of knowing the numbers.

Tell the families, tell the Nation, and tell the People, so that maybe the fallen will not be just numbers.  So that the numbers we represent are not just lines on a budget graph to spend and replace.  We are not just dollars to save by cutting benefits.

Then maybe the People will understand the true courage of war, the courage of a family to continue onward knowing that they had paid it full measure for us all.

This first appeared in The Havok Journal on August 4, 2014.