HomeCultureThe “Clap” Got Me “Q’d”

There are people in life whom you try your hardest to respect or at least be kind to but just can’t. To you, they are worse than some sexually transmitted disease constantly giving you that uncomfortable burning feeling like “The Clap.” Ironically, former Director of National Intelligence James “The Clap” Clapper is that guy and recently, he got me “Q’d.”

When I first learned I got “Q’d,” I had no idea what it even meant. My friend sent me the below screen grab and stated, “I don’t know if you follow the QAnon movement but I do. You were just Q’d. That’s a pretty big deal.” 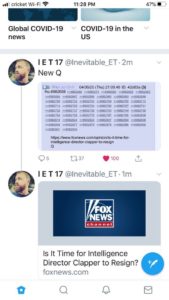 She continued to explain. “When Q leaves a hint as to what’s coming next in the bring down of the past Administrations, he will prove it was a past newspaper article or event from the past. Your article on Clapper must mean that he is the next one to be indicted.”

This is the actual article I had written several years ago for Fox News which got me “Q’d.”

Now, after reading what she had revealed, I was quick to do some research about the entire QAnon…. following??? I mean, is it a following? A cult? Just a group of like-minded individuals? All three? I really do not know.

So apparently, QAnon is a right-leaning entity that allegedly has access to inside information pertaining the so called “deep state” within our government which, according to its followers, has tried to take President Trump down since before his inauguration. At least that’s what I think QAnon is all about. Please correct me if I am wrong.

As far as my friend and her sentiments as to why I got Q’d when she stated, “Your article on Clapper must mean that he is the next one to be indicted.” Ummm… I for one am not going to hold my breath.

Clapper aka “The Clap” did lie on multiple occasions during sworn testimony which is a crime.

He committed an act of perjury and authorized intelligence collection on U.S. citizens which is, well, illegal according to EO 12333 but who knows how laws are interpreted any longer because such collection efforts have gone on for some time. (For you in the intelligence world, trust me, I hear your groans loud and clear regarding this statement.)

He was also involved in the targeted killing of a U.S. citizen living abroad with a massive drone strike. Actually, make that two U.S. citizens— Anwar Nasser al-Awlaki and his son Abdulrahman al-Awlaki who was killed two weeks after his father (yup, both by drone strikes).

For those who follow the Awlaki family, you know about Nawar Awlaki who was eight years old when she died during a Joint Special Operations raid in 2017 which unfolded during President Trump’s watch. The raid left fourteen people dead—many of whom were women and children being harbored in a terrorist camp—casualties of war. A stark difference from the deliberate and indiscriminate targeted killing of Anwar and his son Abdulrahman.

The death of Nawar is sad but definitely not worth losing sleep over. I hold the terrorist harboring women and children more responsible for innocent deaths than I do our warfighters who pull triggers during raids. Maybe those who are human shields will one day wake up and fight against terrorists so we do not have to. Just a thought.

I do not lose any sleep when a terrorist is killed. Actually, I sleep much more peacefully every time I hear another dirtbag terrorist dies. Speaking of, can we kill Ayman Mohammed Rabie al-Zawahiri already? Oh wait, I forgot, he is off-limits because of his status within the Muslim Brotherhood; hence why he was not killed in 2008 when we had him locked. Sounds conspiratorial just like QAnon, right? 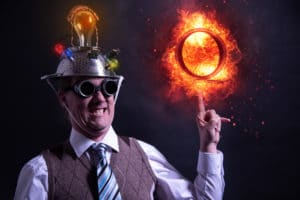 So yeah, “The Clap” is a criminal in my humble opinion and I detest the man. But, will he ever be indicted and found guilty of crimes let alone be sentenced? Again, I will not hold my breath.

I guess I should be flattered about being “Q’d.” I mean, who would have ever thought? And maybe I am a little flattered that something I wrote many years ago has come back to the spotlight among a select group of several thousand. But truth be told, I see James Clapper dying as a free man without ever seeing any jail time. I’m just not buying “Q’s” suggestion on this one.

Does this mean “QAnon” is wrong? Not necessarily. Crazier things have happened.

Anyone know how much the membership fee is for “Q?” They seem like a fun bunch.