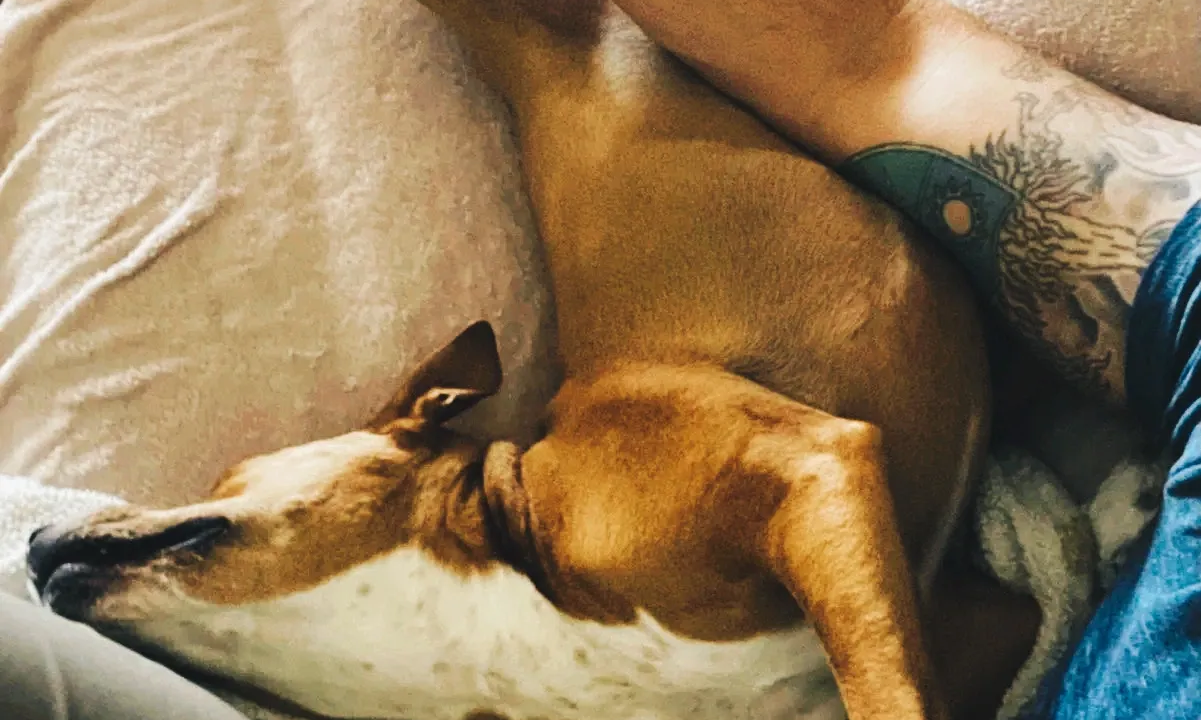 My 7-year-old pit-bull pup, Jupiter, was super snuggly one morning after breakfast. I’m familiar with her typical post-breakfast-settle-down routine, and she wanted way more cuddles than usual. As I sat on the couch and read about motorcycle adventures on my phone, it seemed Jupiter just couldn’t snuggle close enough. As she inched her way closer, she ended up falling asleep in the most adorable position possible. I snapped the photo below.

Of course, it’s a heart-warming picture. But Jupiter’s ‘Newtonian Classical’ cuteness isn’t the most interesting conversation this picture elicits. I will argue it’s aesthetically pleasing because it’s mathematically pleasing.

Ask any physicist and they’ll tell you the same. Mathematics is the language of the universe. It’s everywhere; and it’s nowhere. It’s the language that describes the rules and laws that govern our reality; and everything in it.

When I look at this cute picture of Jupiter snuggling closer to her daddy, I see the geometry created from the equations that describe The Golden Ratio and The Fibonacci Spiral. I see the beauty of mathematics.

Many, if not all, of the famous Renaissance artists subtly incorporated the Golden Ratio, Sacred Geometry, Fractals, The Fibonacci Spiral, etc. into their great works of art because they knew those images pleased the eye. The ancient megalithic structures that pepper the planet are built to showcase mathematics, sacred geometry, and the stars. Those shapes and ratios are even found within the dimensions of the human body.

Those shapes and images speak to us on a subconscious level. The subconscious absorbs more than the self realizes. But why are those images so pleasing to us?

Maybe we feel drawn to those images and shapes because it subconsciously connects us to mathematics; to the hidden operating system that governs the Universe? If that’s true, then it’s logical to deduce those shapes to act as a portal into the hidden operating system that governs reality. This picture of my pup begging for morning snuggles, allows us to see ever so subtly how mathematics interacts with us to create something beautiful.

If we, as a species, are governed by a mathematical operating system that relies on Electricity to make those equations true, then what is Electricity?

Ancient religions have long taught the path to the epiphany that we are all ONE. Otherwise known as, non-Duality; a belief that everything in the Universe is connected and we are all part of that endless entity. According to the laws of Quantum Mechanics, which is governed by mathematics, non-Duality holds true.

I see these mathematical truths in the wave formations on the lake at my dad’s house. I see the laws of mathematics in the oak trees when the wind blows through the leaves. And I see these universal laws in a cute picture of my best girl on the couch begging for snuggles.