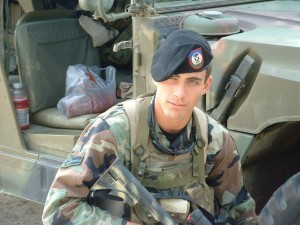 Editor’s Note: Jarred “J.T.” Taylor wasn’t always a movie star or an executive of a multimedia empire. Before Article 15 Clothing, before the Range 15 movie, J.T. was… well, you’ll see. This is the story of what helped make him the man he is today. This first appeared in The Havok Journal on March 17, 2016.

“Oh you’re Taylor? Great, run around the building until I come get you,” a raspy, combat-hardened voice yelled down to me as I walked into the compound of the 14th ASOS on October 20th, 2003. The man behind the voice was the squadron superintendent, MSgt William McCarther aka Buddy Mac. On the left sleeve of his BDU’s, above his stripes, lay an 82nd Airborne patch with a Ranger Tab above it. His right sleeve was adorned with a Special Forces arrowhead combat patch. I knew exactly who this man was, as our instructors told stories about him throughout our technical school. He had received many accolades during the invasion of Afghanistan, and for his role with the U.S. Army Special Forces as an Enlisted Terminal Attack Controller. This man was a legend.

It was 7:30 in the morning my first day in North Carolina. I had a giant tan packet with all of my orders and medical records tucked under my arm as my brand new Altima jungle boots thudded across the pavement; following the MSgt’s instructions, I completed lap after lap.  Occasionally, a guy would walk out into the vehicle bay and yell something like, “that’s right Cherry, keep running.” It was then that I learned my new name: Cherry.

Almost an hour and a half had gone by and I was still running thinking to myself, oh shit what did I get myself into? That was when MSgt McCarther yelled for me to get upstairs. I walked into the top floor of the building and there he stood shoulder to shoulder with the squadron commander.

He yanked my folder from my arms and started shuffling through the papers grabbing my orders. “I’ll give these to our orderly room. Meet your commander, Cherry.” He gestured towards the man on his flank, “Lt Col Pope. The only reason you should ever have to talk to him again is if you’re in trouble, so don’t get in fucking trouble, hooah?! Oh, and you’re going to Alpha Flight. Your team room is downstairs all the way to the back left, they know you’re coming.”

I slowly opened the door to my new office/flight room and was greeted immediately with what sounded like fifteen guys yelling at once. One screamed, “Get the fuck out Cherry! You don’t just walk in this office!”

“You better fucking announce yourself Cherry!” screamed another.

A man exited, A1C Jeffrey Tardiff, who was my height but had a solid 45 pounds of muscle on me. I had just turned eighteen, and needless to say, I was a scrawny little shit. I snapped to parade rest as he explained to me that my name has now changed again, ‘Cherry Chuck Taylors’, and every time I enter that team room I must yell, “Cherry Chuck Taylors entering the office.” I was instructed to do the same every time I left as well.

I executed my new instructions, and finally entered the room. Looking around, it literally looked like I just walked into the hideout of The Lost Boys. They were all jacked, tattooed, wearing BDU pants and brown t-shirts. As I was trying to take it all in I was interrupted by the instruction of, “Flutter kicks, Cherry!” I immediately dropped and began the exercises. I was scolded for not counting them out, and then scolded for not counting loud enough. I quickly learned everything I did would be the wrong thing.

Treatment like this went on for a few weeks. It was all business at the unit; I would do exercises while the guys laughed and joked, and came up with other creative ways to make me sweat.  Over the course of a day, Tardiff, Sven, and Clint would take me aside and quiz me on radios, antenna theory, navigation, and maps skills.  These guys were the experts of the team, and were preparing for the JTAC Qualification Course. The level of knowledge they had about this job was mesmerizing. I always enjoyed the older guys trying to stump Clint on a regulation or ‘gee whiz’ question because they just couldn’t do it.

A few months passed and I finally obtained my Combat Mission Ready Status. This meant I passed a ‘check ride’ put on by my own team, and I had displayed to them I knew the fundamentals of what it was to be a TACP. Things had lightened up and I was beginning to become friends with all these guys. I came in late one morning right before lunch because of a medical appointment I had. I walked into the office and was greeted with the same extreme hostility, just like it was day one all over again. They started screaming different exercises, had me sprint around the building, moved me into the vehicle bay and continued a brutal smoke session. Other guys were joining in just to keep yelling at me! They moved me to a mud pit behind the unit where I did exercises in the water as one of them held the hose over me. I was terrified, I thought I had done something wrong, and all the friendships and trust I had finally earned were being flushed into this mud pit with every repetition I did.

“Push up position, move,” a voice yelled as I moved into the front leaning rest with the water just below my face. Instantly I was attacked from behind, 4-5 guys all were fighting to get my arms behind my back as I heard a roll of duct tape peel open.  They taped me up like a mummy from my feet to my hands.  I was thrown back into the pit face first. I was exhausted and out of breath, but I slowly rolled myself over. To my surprise the entire team was standing over me in the pit. Tardiff jumped down and cut my arms and legs loose. As I stood up each guy shook my hand and said, “Welcome to the 14th ASOS.”  Everything became emotional for a minute; I was being invited in as an equal to these badass dudes.

Now that was a proper initiation.