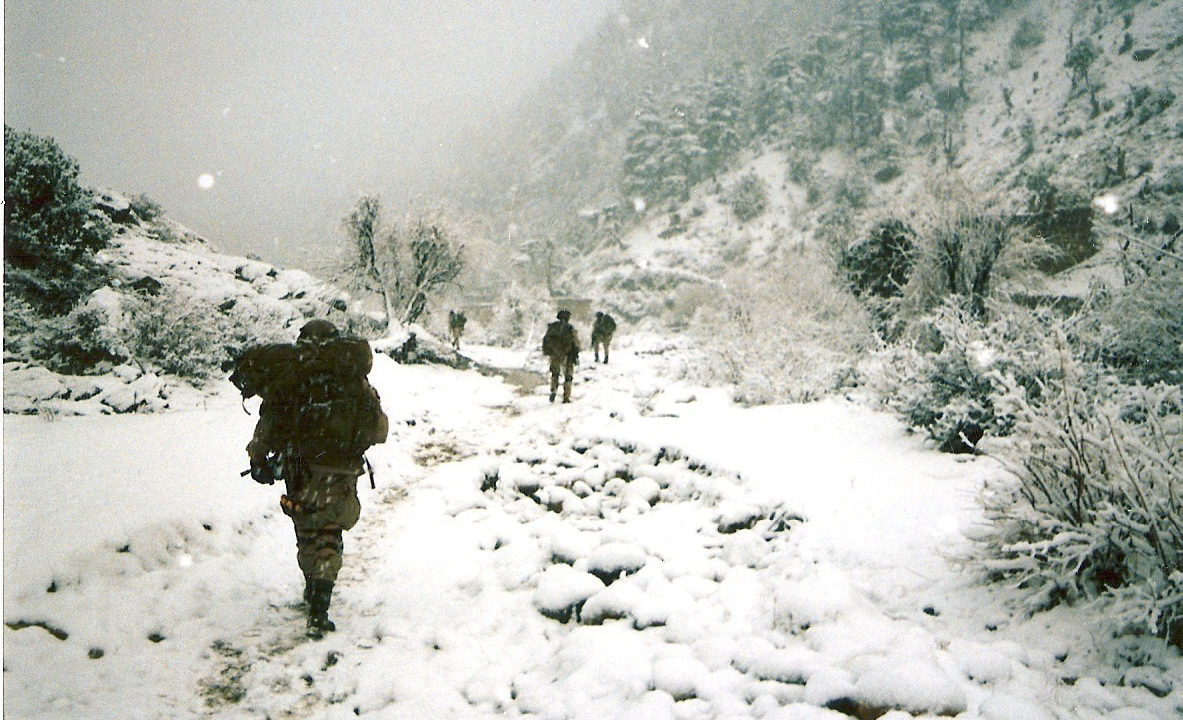 Editors Note: In late 2003, large portions of the 75th Ranger Regiment were deployed for an operation titled “Winter Strike” in the mountains of Afghanistan. This mission was unique in the war on terror in that it saw Rangers going out into the mountains for weeks on end, living off the land and the people to accomplish their mission. This is one such account of the experience, which is very appropriate on this Thanksgiving Day. This first appeared in The Havok Journal on November 21, 2018.

Years ago I spent Thanksgiving on a distant hill in the middle of a God-forsaken country I’d visited a few too many times. I was cold, wet, tired, hungry, and homesick. It was the second round of “Winter Strike,” and for those of you who were there, it’s a memory we’ll not soon forget. In all my time in 2nd Ranger Battalion, I never really considered what boot gaiters were for; that is until I was absolutely reliant upon them as we trudged through knee-high snow while searching homes. The first part of “Winter Strike” was spent walking, sleeping, searching, shivering, walking, filling water from streams, walking, bartering for different elements from the LRRP rations, brewing coffee with a small MSR camp stove, and making snow cones with the beverage powder from our meals. It was cold, it was miserable, and it’s one of the fondest memories I have of my time in uniform.

The first round of “Winter Strike” saw us dropped off in the middle of nowhere, given a direction up the valley, and told to “go.” The stories are too numerous to remember them all, but I recall using local axes and explosives to clear trees for a Helicopter Landing Zone (HLZ), buying goats from the villages we passed to eat, seeing a banner for the Afghani wrestler who was heading to the Olympics and literally humping for three hours straight only to be able to see that we had moved about 300 meters on the map but ascended a few thousand feet in elevation…. We walked up and down that valley, stayed in whatever shelter we could find to get out of the elements, searched towns and villages, and eventually were picked up in that same HLZ we felled trees to make.

Back at Bagram, we had roughly eight hours before we were back on a bird-headed to a different valley. This time we needed to clear the “83 Gridline.” This mythical line in the ground promised coffee and donuts when we got there and a first-class flight back home. That’s not anything close to the truth, but it was the sarcastic joke swimming around in my head. It wasn’t as cold in this valley, and there wasn’t the same amount of snow, but it was miserable nonetheless. We made the best of it by sharing stories and taking care of each other the best way we knew how. Years later I am still amazed at the ability of a Ranger to see the discomfort in the faces of his brethren and know exactly what to say or not say to make them feel better or at least distracted. It is this same compassion I witnessed that has been the most prevalent of the lessons I look back upon for guidance from my time in uniform.

One of these nameless and indistinguishable days turned out to be Thanksgiving. Truthfully, I didn’t even know it was thanksgiving until the platoon leader mentioned it in passing conversation. The thought added what seemed like more misery to my already dreary disposition, the only solace being that my friends were there with me, so I was not alone in my misery.

My Brothers were a sniper attached for the mission and the weapons squad leader of the platoon I was attached to. I was a mortar section leader who worked often with this company and platoon.

The two of them had been raised in the same squad as privates and I had the privilege of calling them friends for many years. Our little trio made the best of things as we started a fire that was little more than a couple of twigs putting off more smoke than heat. We settled in for another cold night as we made our rounds checking security and wondering what tomorrow would bring. “Clear all the way to the 83 grid line” was still reverberating through our heads as we tried to figure out what was so special about that invisible line in the earth.

Later that night a welcome surprise came when 2 UH-60s came buzzing in with two gunships as escorts. The platoon sergeant ran out, flagged them in, and one after another the Blackhawks barely touched down as the crew chiefs started throwing out mermite after mermite. Not more than 40 meters from where my Brothers and I sat, was a pile of containers full of turkey, stuffing, potatoes, ham, sweet potatoes, bread, pies, and even eggnog.

The chain of command set up the feeding line and we sent our men through as we took their positions on security. They lined up to pile their plates with the tastes of home, and when they had eaten their fill, I sat with a small group of men it has been my pleasure to say I served with and my distinct honor to call my friends. Among us now were my platoon sergeant and the battalion physician’s assistant. The PA didn’t want to eat until all the men on the observation points had made it in to get chow, but I distinctly remember the weapons squad leader saying, “come on sir, break bread with us.”

He relented, and the five of us broke bread. Among us that were there sat a Jew, an agnostic, two Baptists, and a man who didn’t quite know what he believed in – but none of that mattered. What’s more, in that small group, there were two that couldn’t stand the sight of each other. Two who hated each other to the bone, but none of that mattered either. Before we broke bread and dived into what must have been the biggest meal we’d seen for just under a month, my good friend who was also the weapon’s squad leader said he thought we should say aloud what we were all thankful for. We looked around at each other and took turns, each of us telling the other four how we felt blessed.

For that brief moment huddled around a minute fire, I wasn’t in that far-off country on a nameless hill. I was seated at as grand a table as I could have imagined, surrounded by nothing less than family. I was at peace in a country that hasn’t seen or ever known the meaning of the word for generations. For those brief few moments, I knew brotherhood more so than I’ve ever known before. The turkey, potatoes, bread, and everything else had never tasted so good, nor has the company been as grand as it was for the best Thanksgiving I’ve yet had, and ever hope to have.

To the four Brothers that shared that meal with me, I thank you for giving me one of the greatest memories I’ll ever have.

To all of you men and women who have stood a post, I thank you for all the great memories I have yet to experience and recall because of the freedom you’ve given me. This year I’m thankful for you all, and the next year and the year after that will be the same.