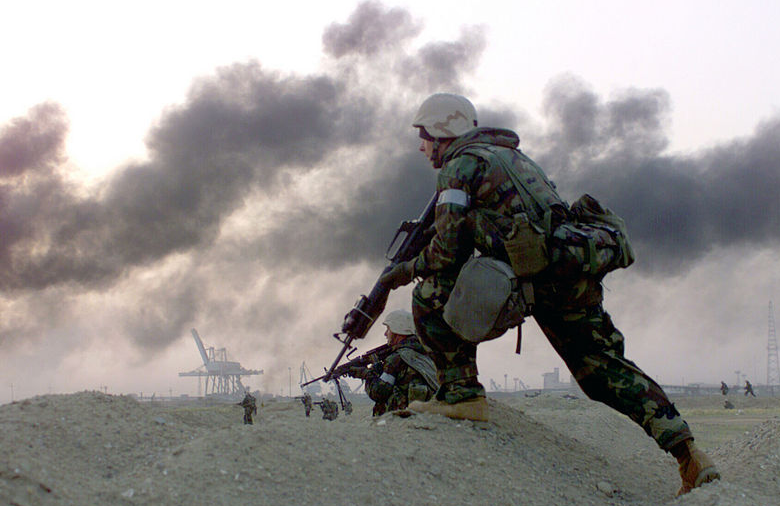 Sometimes the truth is intentionally covered up.

Sometimes, though, the truth just slips through the cracks, obscured by the fog of war and then overtaken by surrounding events. This is the true story of seven American Prisoners of War rescued after twenty-two days of captivity.

On April 13, 2003, U.S. Marines recovered seven American POWs in Sammara, Iraq. Aside from those basic facts, the media and even senior military leaders at the time got everything else wrong about the rescue. Not intentionally, but the Iraq invasion was fast-paced and a lot was happening. Baghdad had just fallen, Saddam had disappeared, and everyone was so excited the POWs were rescued at all the details somehow just… got lost.

CNN reported Iraqi cops led Marines to the POWs. The New York Times said it was Iraqi soldiers. Some outlets said Iraqis brought the POWs to the Marines, others said the POWs were found sitting on the side of the road.

The truth is a daring raid far beyond friendly lines rescued the POWs. The truth is the rescue only happened 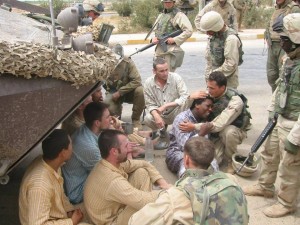 because of innovative thinking on the part of a Marine Corps Counterintelligence team, aggressive intelligence collection and a Marine commanding officer who had the cojones to take a potentially career-ending risk on nothing more than faith in the Marines under his command.

How do I know? I was there, I was a member of that Counterintelligence team.

We were HUMINT (HUMan INTelligence) Exploitation Team Three, callsign Jesuit 3, a six-man team of Marine Corps Counterintelligence Specialists plus two linguists. We had spent the majority of the invasion attached to Third Battalion/Fifth Marines running point for the Marine Corps’ push to Baghdad. From the moment we crossed the border on 19 March we had conducted tactical interrogations, pored over captured documents, and interviewed civilians to gain information on the enemy, all while repeatedly coming under fire ourselves.

‘Exhausted’ doesn’t begin to describe how we felt. We were dried out, like the cracked and crusted bed of a salt lake.

On 12 April First Marine Division abruptly re-assigned Jesuit Three to Task Force Tripoli, an ad hoc unit whose mission was to take Saddam’s hometown of Tikrit. It’s funny how international geopolitics can sometimes play an intimate role in your life; Turkey had refused to allow US troops to fly through its airspace to invade Iraq from the north, so First Marine Division commander Major General Mattis intended to remedy the situation.

And so we rolled north. 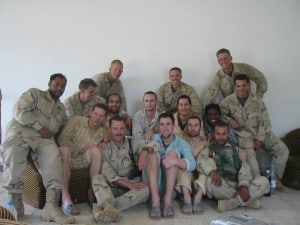 Jesuit 3 attached to Third LAR Battalion, under the command of LtCol Clardy. Third LAR’s mission in support of Task Force Tripoli was to be a blocking unit for the main body’s assault on Tikrit. On the morning of 13 April, while the rest of the task force advanced on Tikrit, we set up outside Sammara, some forty kilometers south of Saddam’s hometown.

Sammara is considered a holy city, we weren’t supposed to enter it and it wasn’t needed for the blocking mission. The battalion set up on the road to Tikrit just to the west of the Tigris River and the bridge that led into Sammara.

As the morning broke, we began to get visitors. The city awoke and discovered American troops on its doorstep. Throughout the first hours, I screened farmers and other locals, trying to find out the disposition of Iraqi forces in Tikrit.

Around 10 a.m. a small group of Iraqi police approached me, Jesuit 3’s team chief and our linguist at the checkpoint outside the city. They gestured and said they wanted to talk privately, so we led them to a nearby schoolhouse, now abandoned. They casually asked if we wanted information about the American pilots.

Full stop. My jaw hit the floor, my fingers fumbled with my pen and notepad.

Aside from winning the war, finding Saddam Hussein, etc, there was no higher priority for the American military than finding the POWs. I had heard there was a task force set up with Special Forces and CIA and who-knows-what-other assets assigned to do nothing but hunt for our lost soldiers. There had been rumors they’d missed the POWs by a matter of hours in Bagdad, that the POWs were being moved every day or two. The Iraqis knew we were going to come for them, it was just a matter of time.

Every Iraqi who had a part in holding the POWs was scared shitless they’d be caught holding the POWs. The thought of Special Forces kicking in the door and killing them all had them petrified. This fear dramatically raised the likelihood the POWs would be killed out of hand or moved again and then killed. The POWs told us later they were certain is was only a matter of days before they’d be executed.

But while our team chief and I were busy trying to work with the Iraqi cops and figure out exactly where in the city the POWs were being held, another member of Jesuit 3 was also getting information.

An Iraqi I’ll call ‘Amir’ approached SSgt Randy Meyer. Amir was a tribal elder and he claimed he knew where the POWs were being held. But the problem was specificity. And corroboration.

By now, Leclaire and I had passed our intel to the battalion command. We fully believed the POWs were in Sammara. But without specific grid coordinates, there was no way LtCol Clardy could order a mission into Samarra. As a holy city, it was off-limits.

SSgt Meyer came up with a solution. He borrowed (stole, really) our lieutenant’s GPS, a little yellow Garmin, and quickly showed Amir how to use it.

“Press this button once while you’re in front of the correct house, come right back. Don’t touch anything else, don’t go anywhere else!”

Amir took off with the GPS. Meyer held his breath pretty much the whole thirty minutes it took for Amir to come back with the grid coordinates.

Jesuit 3’s commander, 1st Lieutenant Nate Boaz, took the team’s information to LtCol Clardy. Between the cops and Amir, we had corroboration. With the coordinates we had specificity. But LtCol Clardy didn’t have permission.

He also didn’t have comms with higher headquarters.

The moment was fleeting. Third LAR needed to move from its blocking position and join the rest of the task force in the assault on Tikrit. The battalion couldn’t wait around to raise comms with higher headquarters and get permission to launch a raid into the city to recover the POWs. Or, if higher denied permission, it would be impossible to wait for the Special Forces units to fly up from Bagdad and give them the information Jesuit 3 had obtained.

Waiting or leaving, both options meant the POWs would likely be moved and executed.

So, relying solely on Jesuit 3’s intelligence, LtCol Clardy ordered a rescue mission. One platoon of Marines, two LAVs, SSgt Meyer, and our linguist. That’s it. No fast-roping Special Forces, no drones, no NSA. Just a handful of Marines acting on intelligence collected the old-fashioned way, one guy talking to another.

If we had been played by our sources, if there was an ambush waiting for that platoon, LtCol Clardy’s career would probably be over. He knew it. He sent his Marines in any way.

We waited. What if there was a holdout group of Saddam Fedayeen in the city? What if the guards executed the POWs soon as they heard the Marines approaching?

It only took a little over twenty minutes for the platoon to enter Sammara, find the POWs, and return to the safety of American lines. When the code word for recovered POWs went out over the battalion’s radio net, “Seven Nightingales are inbound,” the entire battalion started cheering, and not a few of us were in tears.

I’ve never felt anything like it. Not before, not since. Success was a drug, and we were all high on it as we talked to the freed POWs, waiting for helos to take them home. Those moments made all the shit Jesuit 3 had seen and done during the invasion worthwhile. Now, years later, I see pictures of their kids on Facebook and I start crying. I only played a small role in bringing them home but I don’t think I’ll ever have a greater achievement for the rest of my life.

There aren’t a lot of stories that came out of the Iraq invasion that have a happy ending. This one did. In his report to Mattis, LtCol Clardy summed it up best:

“This event is the highlight of our actions during Operation Iraqi Freedom. Each Marine and Sailor involved was touched by the emotion of the recovery and feeling of accomplishment. None will ever forget the look on the seven soldier’s faces when they realized that they were safe and in the hands of the U. S. Marine Corps.”

The POWs recovered that day were:

This was originally shared on The Rhino Den and shared here with permission from the original author.

J.E. McCollough served in the Marine Corps from 1996 to 2005. He is a combat veteran, including Operations Iraqi Freedom I and II as a Counterintelligence Specialist, and the recipient of a Purple Heart and a Navy and Marine Corps Commendation Medal with ‘V’ Combat Distinguishing Device. While in Iraq in 2003 and 2004, J.E. served as a part of 1st CI/HUMINT Company, 1st Intelligence Battalion.

He was attached to 3rd Battalion/5th Marines, Task Force Tripoli, and 3rd Battalion/23rd Marines at various points during the invasion and was attached to 2nd Battalion/4th Marines in Ramadi in 2004. Including post-Marine Corps civilian deployments as an intelligence analyst for the Department of Defense, he served over forty months in the Middle East and Central Asia between 2002 and 2011. J.E. has written articles for TIME magazine’s Battleland online as well as RangerUp.com.