HomeCultureSemper Fight: A Former Marine and the Bar Fight Scene 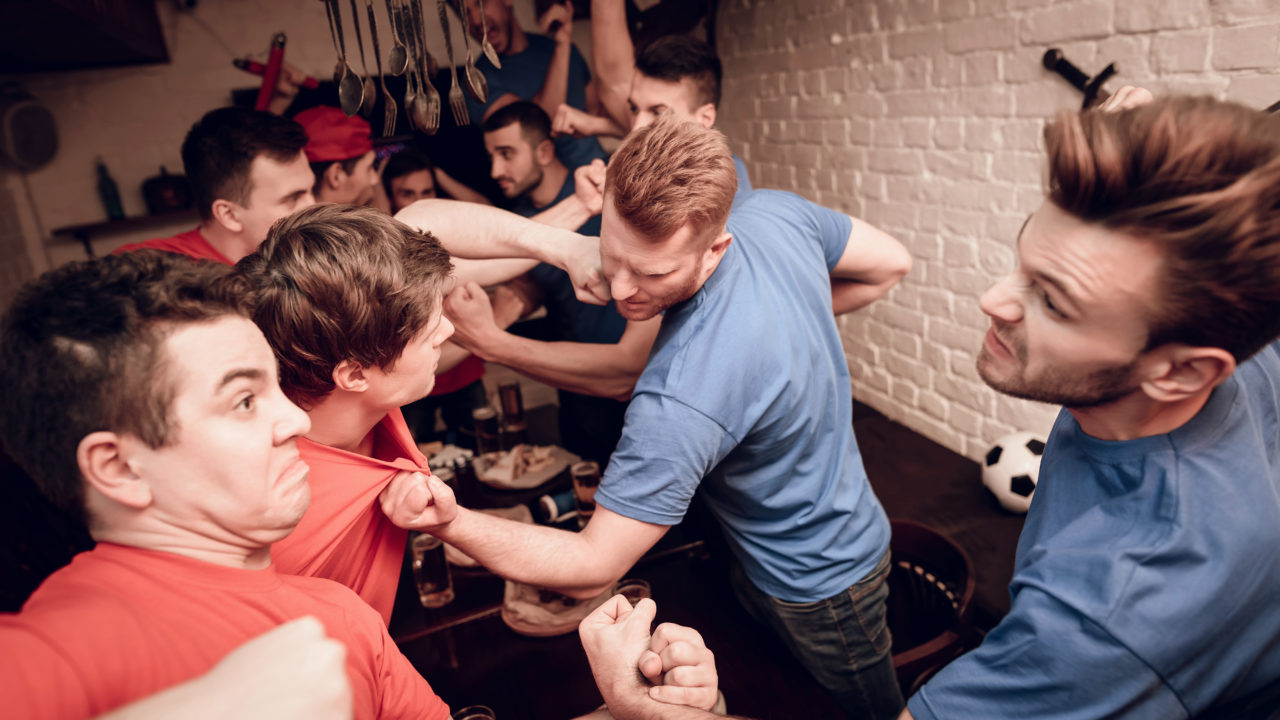 The summer with its heat and partying and overtime was over. Now the days were cooler and the nights were cold. The Santa Ana winds wracked the city. And Sylvester hired Craig.

Craig had just left the Marine Corps and was an aspiring bodybuilder. I don’t know what gods he pissed off or when. But it was a good thing I had become numb to fighting. Because the moment Craig got hired, we got a whole lot more of it.

I’d just ambled up to the Purple Room door to start my shift when I felt the buzz of the radio in my palm. I pressed the receiver against my ear just in time to hear, “Lounge! Lounge!”

I freight-trained into the lounge, running low, uprooting people, leaving spilled drinks and startled curses in my wake.

I spotted the trouble instantly. Waves of fear and adrenaline rippled out from the far corner of the lounge. People scurried to the perimeter. Space opened around the fight. This wasn’t going to be a grab-and-toss. This was going to be a goddamn pay-per-view. My face tightened and my neck turned to steel and I was ready to brawl. Now…who the hell is who?

Judge had beaten me there. Good, I don’t have to worry about him. He was already putting on a clinic against some weekend warrior. Ivan might have been there already. Maybe Danimal. I can’t remember. I was too busy looking for…

I reached for the white guy…and felt a pair of hands on my back. Glad someone found me, ‘cuz I was having a hard time finding a dance partner. I skidded my leg between his feet and hooked his ankle.

Now I’m on the ground with the guy. And Craig. And Craig’s guy.

Two or three Christmas’ before, my mom had bought me a denim jacket from Diesel. I only mention it, because I hope they keep making them. It had a shit-ton of zippers. And metal buttons. And good, thick, tightly-woven denim. With patches on the elbows.

She lived 2500 miles away from me. I didn’t see her enough to disappoint her. “Of course I like it.” I hugged her. “I’ll find a place to wear it. It’ll be great. Promise.”

I could hear the glass crunch against my back and elbows as I fought for position on the guy. But I couldn’t feel the glass. I grinded my zippers across his face as I slid to back control. Taste metal.

My guy’s fingers flexed and grasped one panel of the jacket. He tried to punch. I vaguely felt the force dissipate through the denim fibers. My jacket sleeve tore across his face, catching his lip. Why do you need metal buttons, zippers and sharp leather edges on a jacket? This must be why. I really loved my Mom right now.

Craig, though, was in short sleeves. In the purple light, I could glimpse glossy cuts dripping black blood all over his arms. There’s a price to pay for showing off your biceps.

I locked a choke on my guy’s neck and stumbled to my feet. His feet slipped, guillotining his neck in my forearms. He wasn’t going to have a fun trip out the door.

I left my dude face-planted on Sunset and met Craig stumbling out the door with his guy.

“Lemme help you, bro.” I cinched on a body lock and swept his guy’s legs out from under him. Craig let him go as I dragged the dude to the sidewalk.

“YOU ARE FUCKING LUCKY TO BE LEAVING HERE ALIVE, BITCH,” he was full drill instructor in the dude’s face.

Amusing. But not the ideal location to dress down and rough up a person. I tugged Craig’s shoulder. “I’ll hold him for 5-0.” I nodded at his arms. “You need to get yourself looked at, bro.”

That was the first fight. That hour.

The next hour, there was another punch-up. In the exact same location. I turned to Judge.

“We gotta empty the place.” There were too many bad vibes lingering in the room. After big fights, it was important to exorcise the whole room and start over.

So we did. It didn’t matter.

I don’t remember the specifics. I don’t remember who did what or why or how. All I know is I barely saw Josie the rest of the night. I was too busy flowing from one scene to the next. We had a fight on the back patio. Then, we had someone pissing on the bar. And a four-person brawl in the driveway. And, just before we could close the Purple Room, there was another stone-cold assault on the dance floor.

All I remember was how the night ended. With Craig and I in a full-out sprint down the sidestreet, chasing after a kid ten years younger and three miles per hour faster.

“Oh, shit,” I slowed to a jog halfway down the block.

“You know,” Craig panted heavily next to me. “I was gonna ask you guys if you got a lot of action here.”

Fighting alongside Craig had energized me. It was like seeing your favorite movie with someone who’d never seen it before – seeing my job through his eyes breathed new life into the club for me.

I thought I was joking.

This article first appeared in The Havok Journal on August 14, 2018.