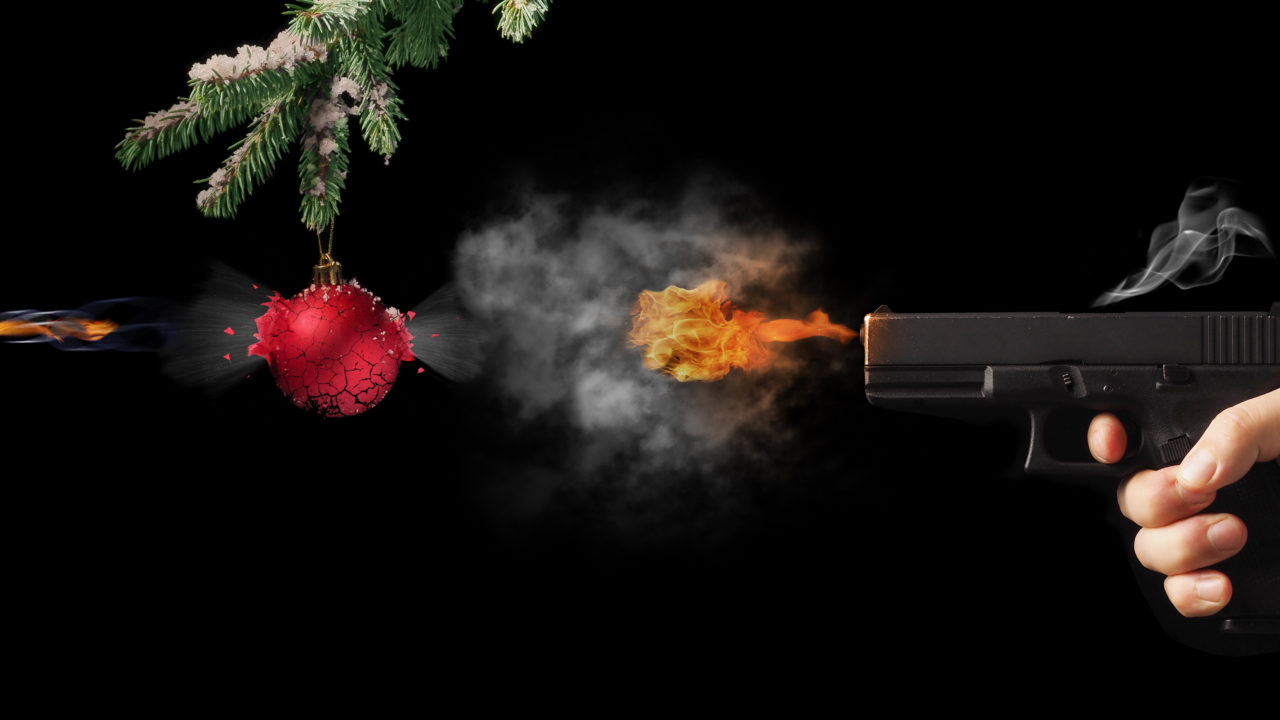 Editor’s Note: This is a tale from the “old days” in Afghanistan, back when the uniforms were tan and the vests were green. Check out more of David Hartmann’s entertaining and excellently-written downrange memories on his blog. This first appeared in The Havok Journal on January 2, 2015.

(Christmas, 2003)
Brown. Nearly everything in Afghanistan is brown.

The dirt, the buildings, the vehicles, the equipment, even most of the people, friend or foe, were covered in that dirt. Christmas came as a special day when we tried to inject some color into our surrounding brown-ness with light strings from home, fake presents under a fake tree in the chow hall, and even a handful of Santa hats being sported by those not on duty. We all knew deep down this really was mainly an exercise to distract us all from the fact that our families were celebrating real Christmases without us back home and this day would always become the “Christmas when you were gone…” to our loved ones.

The cooks worked magic combining the standard eight types of pre-packaged meals into colorful turkey shapes, bread roll Santas, and mystery-fruit granola cobbler (it’s really better than it sounds). Everyone pooled their stale goodies received in care packages from home, and the few trying to hide the best stuff (one gent’s rum cake smacked of loaves and fishes as I’m sure each of the 200 living at Polecharki got a bite) were hazed into fetching it back out for the masses to enjoy. Most soldiers got the day off from their standard role of training the Afghan soldiers and were allowed to kickback. Guard towers and gates still needed manning, however, and the officer cadre signed up for those slots to give the Force Protection Infantry Company some much-needed downtime. I had the pleasure of running the front gate morning shift with the base commander.

Colonels and captains don’t normally relate much, but we made it work in the Afghan frosty first light. We both got a big laugh when the four German soldiers who lived in our base returned stinking drunk at the crack of dawn. They had been at the neighboring German base reveling with their fellow Deutschlanders surely swinging from the nearest Tannenbaum. Our European Coalition brethren did not suffer under the American “General Order #1” banning all alcohol. I tried to sniff as much as I could when waving their jeep through the gate. The afternoon held relaxing, emailing, and ultimately boredom.

Things perked up when a buddy of mine paraded through camp sporting a white beard and the wildest Santa-eque garb he could get from the rug peddlers at the weekly bazaar. It raised spirits around the base as Tim was known as a jokester constantly pulling crazy stunts. Hands were shaken, backs were slapped, pictures were taken. We thought that it would be nice to spread the cheer around a bit, and equally nice to get out of the base for a while. Living in a fortified compound gives new meaning to cabin fever.

We planned a quick convoy over to Camp Phoenix and into the small USMC outpost deep in Kabul where the 20-man Marine contingent mentored the Afghan Commandos who were guarding the newly-formed Afghan congress or Loya Jirga. We got the nod from the base commander for the mission and wrangled up a detail from the very few willing to blow their downtime by suiting up into full battle rattle and hitting the road. Maybe I’m wired a bit different than most, but I was actually having fun, thinking when you’re stuck in a place like this, what better way to spend Christmas than pulling security for Santa?

We got to the gate at Camp Phoenix and were greeted by big smiles all the way in. They’d gone through all their officers earlier in the day and the grunts were back at their gate levers and mind-numbing guard towers. Some people learn earlier in life that when a person smiles, but they’re really still miserable, that person will just smile with their mouth. It took me several months in a combat zone to learn that when a person smiles big and they’re genuinely happy, even just for an instant, you can see it in their eyes, wrinkling under kevlar helmets and past polypropylene face masks. Our trip was completely impromptu, surprising everyone we met as we made a quick lap through the base. The afternoon was winding down and all of the pre-planned faux Christmas festivities had completed hours ago.

I’ll never forget the looks and cheers we got from the soldiers that night. We then convoyed down to the Loya Jirga site and floored the Marines there. In fact, it took some real persuasion to get through the outer ring of Afghan Commando guards up to where our guys were based. Those Marines were proud of the fact that they were pretty much on their own in their little outpost on a hill in the middle of Kabul. But they took in Santa and his combat elves like long-lost brothers and we got some eye-smiles there too. I think back to that Christmas night less frequently as the year’s tick by, preferring to fill my head with Christmas memories from the here and now…or at least the here and not there. But that trip will always stick with me and help me to realize just how amazingly good we have it here at home. And I hope to teach my kids that same lesson as I pray they’ll never have pull security for Santa in a combat zone.