HomeCultureRange 15 Is Top 5 Most Funded Film In IndieGoGo History

The latest brainchild from the Ranger Up and Article 15 Clothing collaboration, a motion picture titled Range 15, has just made crowd-funding history by breaking into the top five, all time most funded films on IndieGoGo.com. Edging out a film titled Iron Sky, who raised 599,483 dollars, Range 15 has crested the 600,000-dollar mark with ten days remaining in the fundraiser. To take the number four spot, they would have to raise another 37,000, which is well within their reach given the amount of time left and the momentum they still have.

The push to raise the funds to make this movie has been considered an admirable effort by some, and inspiring by most. They started with what many crowd-funding experts consider to be the key to success – an engaging video to pitch potential donors. For social media giants Ranger Up and Article 15, engaging and viral videos just so happen to be their specialty. The video they shot immediately started the buzz they were going for, and the momentum only continued from there. They then enlisted recognizable veteran celebrities such as Tim Kennedy, Leroy Petry, and Dakota Meyer to play supporting roles and offering perks to supporters that range from t-shirts and art prints all the way up to roles in the film and executive producer credits. They even attempted to publicly shame Instagram celebrity Dan Bilzerian into coming on board, but as of the time of this article he has not shown interest. 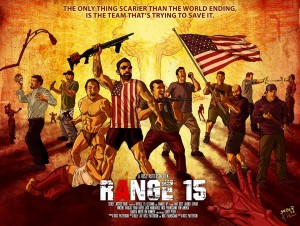 The film itself is a post-apocalyptic zombie comedy that caters to the military-veteran genre of humor. Film maker and author Ross Patterson, who is known for such films as 50k and A Call Girl: A Love Story and FDR: American Badass!, was brought on to produce and direct the film, with Marcus Luttrell (Lone Survivor)and Matthew Serrano coming on as executive producers. Mat Best, known for his YouTube channel that has accumulated over 25 million views, will be taking on the lead role. This will be his debut as a star in a feature-length film.

Range 15 is about as independent as a film can be; yet in such a short period of time, and thanks in large part to the wide support of the military-veteran community, it has gained nation wide attention. What can supporters and fans alike look forward to next? Apparently more than a few on the Hollywood A-List have contacted the producers of the film, although they are reluctant to name names as of this time. With the potential support of the very same mainstream Hollywood elite that they have railed against from the beginning, it won’t be surprising if we see Mat Best on the cover of Variety Magazine or Range 15 with a nationwide theatre release next year. At this point though, there are only two certainties: this movie will be made, and the sky truly is the limit.

To get in on the action, go check out the details on Range 15 HERE!