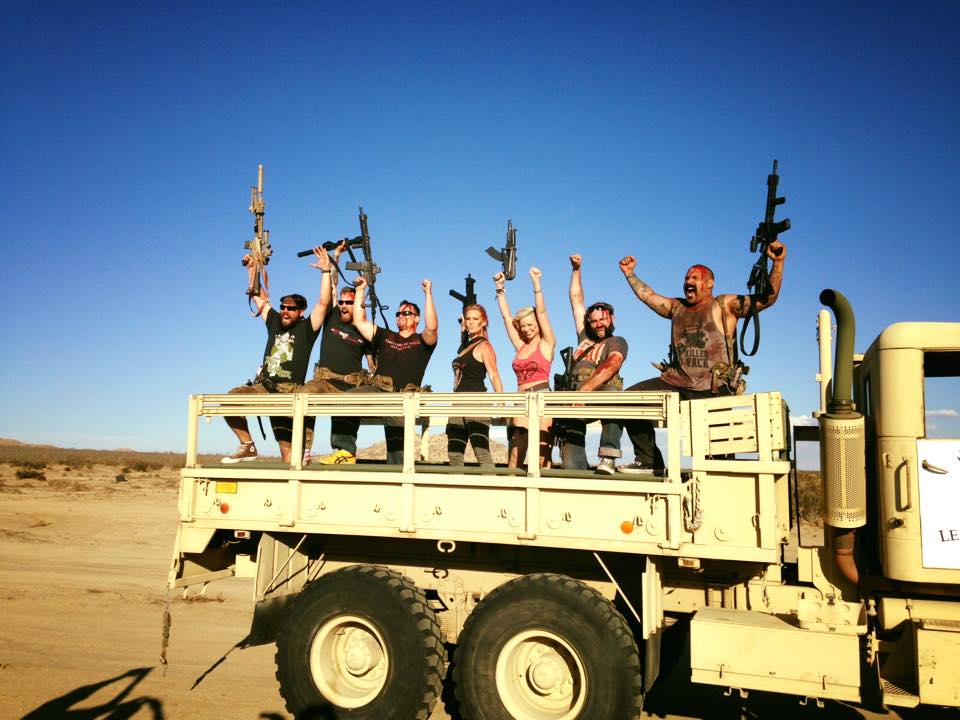 It was a Friday night, and I was back at Jarred Taylor’s house once again. Every time I show up at his place, I never know what’s going to happen while bunking with one of the founders of the now infamous Article 15 Clothing brand. In past visits, I have seen him spontaneously invite over fifty wounded soldiers he had never met over to his house for a just-as-spontaneous house party later that night. I have seen him pull out a drone and buzz rooftops in his neighborhood. I have even watched him call up random celebrities and talk to them as if they were long lost buddies. So I shouldn’t have been surprised when, after getting buzzed off of Broquel wine during the Drinkin’ Bros podcast recording, he invited me into his office to, “watch some Mat Best videos.”

With no formality whatsoever, Jarred pulled up a video onto his large computer screen and pressed play. Not knowing what I was in for, I casually watched as Mat Best was thrown into the drunk tank while William Shatner recounted the prior nights’ raucous events as his public defender. I quickly realized that I was not watching a short, behind the scenes clip of the movie. No, I was watching the real deal. I was instantly excited and disappointed at the same time; I had wanted to wait until the premiere and be caught up in the excitement of what will surely be hundreds of people in a theatre. But alas, here I was… sitting in the dungeon where the freedom-loving trifecta of Mat Best, Jarred Taylor, and Vincent Vargas routinely engage in a ménage-e-trois of creativity that almost always results in an ejaculation of hilarious and viral Internet videos… watching the highly anticipated, highly secret Range 15. Before I could tell him to stop the movie, I was sucked in. 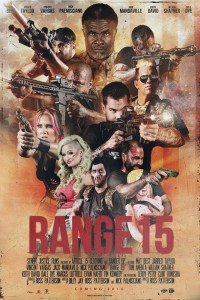 Just in case you have been living under a rock for the last year, I’ll catch you up on exactly what Range 15 is. It started almost two years ago as a film collaboration between Article 15 Clothing and Ranger Up, two companies that have become juggernauts in the military lifestyle space. CEO’s Mat Best and Nick Palmisciano enlisted the help of Ross Patterson to direct the movie, and optioned a script from Billy Jay that could be best described as a post-apocalyptic zombie comedy. From there, they went on to launch the fourth most successful crowd funding campaign for a film in Indiegogo’s history with over a million dollars raised to date. They signed a who’s who cast of Hollywood celebs to include William Shatner and Keith David, as well as military heroes such as Leroy Petry and Marcus Luttrell. The movie has been filmed, the trailer has over four million views, and the movie is set to release in June at over 250 theatres nationwide.

So, what did I think of it? Despite the fact that I count many in the movie as my friends, I will try to give you as impartial and balanced of a review as possible. One thing to keep in mind is that what I saw is not the final cut, there were still green screens visible in certain parts and subtitles were in the place of spoken dialogue that still needed to be added in some scenes. That being said, it was probably ninety percent there.

Most importantly, Range 15 delivers on great military-oriented dialogue. It plays on mannerisms and discourse that anyone who has served can and will identify with. The one-liners in this movie will no doubt be repeated on military bases around the world as often as President Obama draws a line in the sand when speaking about foreign policy. The movie has a good pace, and you never really get bored watching it. Right when you think the plot may start to slow, they whip out a scene that will leave you feeling both entertained and guilty at the same time. As a father, this was especially true when I heard Sergeant Major Gene Vandenham shout, “Mission… Abooooorted!” in one particularly disturbing yet hilarious scene.

Before watching this I was concerned about the Rolodex of celebrities they enlisted into the movie’s cast. I thought that it might be hard to give all of them enough screen time without distracting from the plot or slowing the pace of the movie. Director Ross Patterson absolutely proved me wrong. I felt that all of the big names were introduced in a balanced and well thought out sequence, and that they added to the movie instead of taking away. Bravo, Mr. Patterson. 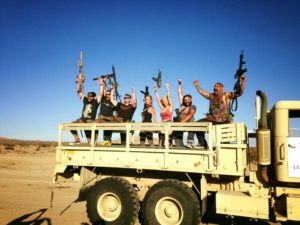 I also have to give props to whoever did the visual effects in this movie. They aren’t ultra realistic; rather they are appropriately over-exaggerated in an 80’s action movie sort of way that completely complements the comedic nature of the movie. When a head explodes, you aren’t disgusted or horrified… instead, you laugh your ass off and shout, “THAT WAS FUCKING AWESOME!!!” That, my friends, is exactly what I wanted to see in this movie. I wanted to be entertained. I wanted to laugh. I got exactly what I wanted.

I promised to give a well-balanced review, so here are the things I thought fell short. My biggest criticism of the movie is that some of the product placement from sponsors was a bit too in-your-face. All movies must do product placement; it’s how you raise money to even make the movie. Range 15 is no different, and I understand why the producers had to do this. I just wish that it could have been a bit subtler. The good news is that all the sponsors are veteran owned companies, and very deserving of the extra attention.

This is probably selfish of me, but I wish there were more zombies. I may be spoiled by the hordes on big budget productions like The Walking Dead and Dawn of the Dead, but I never felt that the team was in real danger of being overtaken and devoured. That being said, the action scenes had plenty of exploding heads and the choreography when the team was up close and personal with them was well above average. Having seen the movie now and having time to reflect on it, I feel that it is best described as a military comedy that uses zombies, rather than a zombie movie that uses military comedy.

For a bunch of non-actors, there was some great acting in this movie… I’m specifically looking at you Jack Mandaville. Some did better than others, but Jack was incredible. He plays a role very similar to Steve Carrell’s role as ‘Brick Tamland’ in Anchorman, and although he isn’t the lead in this movie, he absolutely kills it in every scene. If anyone should be getting a call from the big talent agencies after this releases, it’s Jack.

If you are a stickler for tactics in movies, you’ll be pleased with this one. Everything from room clearing to how the actors held their rifles was spot on from what I could see. You won’t catch anyone with a finger on the trigger when it’s not supposed to be, and you won’t catch anyone flagging his or her fellow cast-mate. This may not be important to the non-veteran audience, and honestly the actors could get away with being sloppy since it is a comedy, but they chose to take the high road and were dialed in on the tactical aspect of the movie. 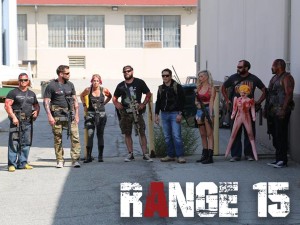 Finally, this movie gives zero-fucks – exactly as promised. They don’t cater to the overly sensitive, and they don’t ever put on the kid gloves. They give you exactly what you would expect from guys who have all stepped into the ultimate arena and survived. It’s not locker-room humor; it’s I’ve been on this COP eating shit food and masturbating in a 130 degree porta-potty for far too long humor. Nothing is sacred, and no one is safe. Necrophilia? Check. Cold-blooded murder? Check. Dead baby jokes? Check. Making fun of officers? Check. If you are the sort of person who has made an EO complaint for nude women being tastefully inserted into the mandatory sexual harassment power point brief, you probably won’t like this movie. If you are the person who sends pictures of your particularly large bowel movements to your friends, than you were born to watch this movie.

Overall, this is a movie you should definitely want to see. Not just because the making of it alone is a triumph for the veteran community, but because it is entertaining and lives up to the hype. Will it be an Oscar contender? No, but that wasn’t the goal to begin with. The producers told us that they wanted to do for the military veteran community what Super Troopers did for law enforcement. They delivered, and then some. This will be a cult classic that lives on for decades, and someday your grand children will be given a peak into what the humorous side of our generation’s war-fighters was like.

Bravo, gentleman. You did the veteran community proud with this one.

Marty Skovlund, Jr. is a two-time award winning film producer and the author of Violence of Action: The Untold Stories of the 75th Ranger Regiment in the War on Terror.