PTSD: “Drama” is Not “Trauma”
by Scott Faith

This first appeared in The Havok Journal September 30, 2014.

It seems there are a lot of people out there these days who don’t quite understand PTSD. I specifically include myself among them; PTSD is a complicated subject, and my medical knowledge is limited largely to what one might be exposed to in bar fights and on battlefields. I fully concede that mental health issues aren’t my forte, and there aren’t any fancy letters after my name to indicate an advanced medical degree. But I don’t have to be a doctor to recognize fishy PTSD claims, no more than I have to be a rancher in order to recognize bullshit when I see it.

And there have been a lot of bullshit PTSD claims out there lately. 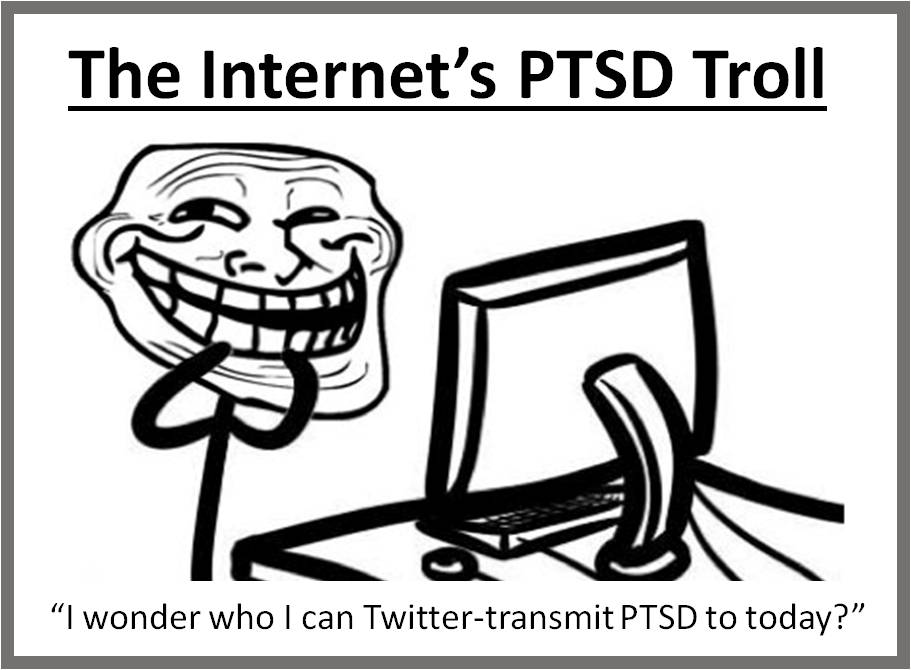 Last month, we wrote an article outlining the BS PTSD claims of a woman named Melody Hensley, who among other things wants us to believe that she acquired  PTSD from mean things she read about herself online. You read that right: PTSD… from the Internet.

The same thing that afflicts thousands of people after surviving things like sexual abuse, horrific accidents, and combat, Melody Hensley says she got from hurt feelings. Well, that’s a new one: “trauma by Internet troll,” as if there’s someone lurking out there in cyberspace just waiting for the opportunity to transmit a serious medical condition to poor, unsuspecting liberal activists.

As we expected, Hensley’s colleagues in the professional grievance industry were quick to pounce after we wrote about her dodgy PTSD story. The same people who don’t care one iota about veterans’ issues and would never visit the places where our work is posted were quickly alerted to what they perceived as an attack on one of their media darlings and flooded the military-themed sites that hosted our article on Hensley. Once there they enthusiastically began attacking us, the host sites… pretty much everything except the facts. They tried to silence us. It didn’t work. They should understand by now that within the veteran community, the truth speaks louder than collective hysteria.

Now we’re learning about the case of Lisa Weiszmiller, who was booted out of the Army for misconduct during initial entry training and awarded an “Other Than Honorable” discharge. More than 30 years and many bad life choices later, Weiszmiller found herself in trouble with the law on yet another drug charge; meth is a helluva drug.

But this time Weiszmiller was somehow able to parlay her military service (such as it was) into a veterans’ diversion program. In that program, which she only qualified for because she wore an Army uniform for a couple of months before getting kicked out, she was able to get her discharge upgraded.  This in turn opened the door to compensation and benefits. But the veteran gravy trail doesn’t end there! Apparently, because of the things that were said to her while she in the military, a career that apparently ended before she even got to her first duty station, Weiszmiller now claims she has… you guessed it, PTSD. I guess we’ll call this one “disability due to Drill Sergeant.”

Weiszmiller’s case represents a disturbing trend:  these days, it seems like whenever someone with military service gets in trouble with the law, you can bet that the PTSD defense will come out. “I didn’t do it, but if I did, it’s because of my PTSD.” It’s becoming more and more prevalent in the civilian community too; because it’s so hard to prove someone doesn’t have PTSD, it has become the go-to condition for people seeking attention and/or a government payout. Not only does this kind of chicanery allow people to use a non-existent medical condition to dodge responsibility for their own bad behavior and/or to receive financial handouts from the government, it also makes life harder for those men and women—military and civilian—who actually do suffer from PTSD.   It’s a little bit like this: 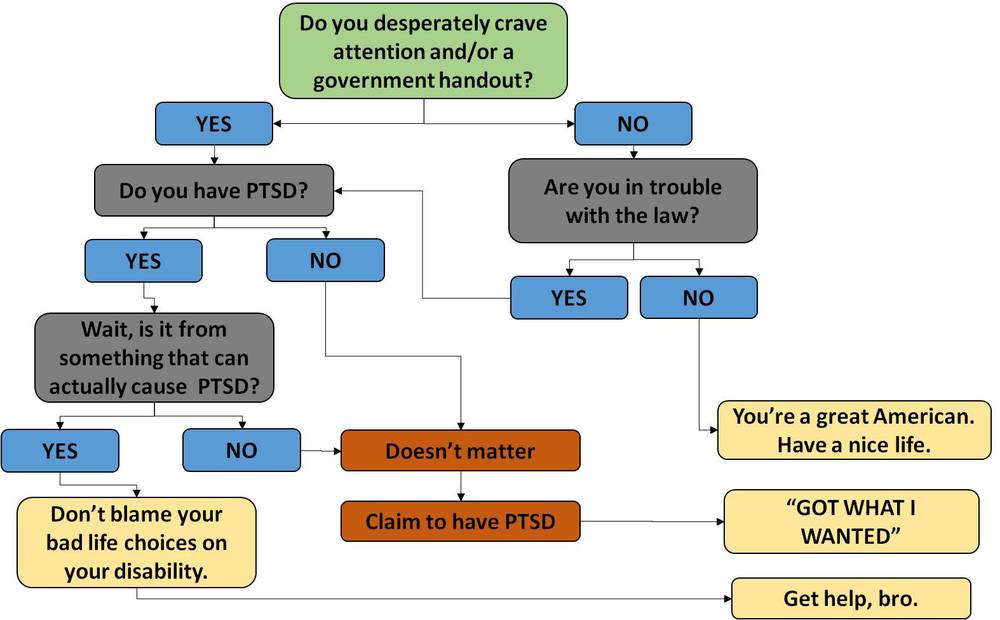 It’s very hard for me to buy a PTSD claim based on humiliation and hurt feelings. It’s also hard for me to consider someone who didn’t even make it out of basic training to be a veteran. But, like I said from the outset, I’m not a doctor. So I went looking for an authoritative definition of PTSD and found the American Psychiatric Association’s Diagnostic and Statistical Manual of Mental Disorders. Here’s what it says (emphasis added):

The diagnostic criteria for the manual’s next edition identify the trigger to PTSD as exposure to actual or threatened death, serious injury or sexual violation. The exposure must result from one or more of the following scenarios, in which the individual:

• witnesses the traumatic event in person;

• learns that the traumatic event occurred to a close family member or close friend (with the actual or threatened death being either violent or accidental); or

• experiences first-hand repeated or extreme exposure to aversive details of the traumatic event (not through media, pictures, television or movies unless work-related).

It takes some bigtime mental gymnastics to try and make PTSD stretch from the authoritative description shown above to the situations involving Hensley and Weiszmiller, mainly because the “T” in “PTSD” stands for “trauma,” it doesn’t stand for “talking.” Some exceptions apply, but no physical trauma involved = no PTSD. What these two individuals claimed to have experienced (and it’s important to note that we have no way of knowing if their claims are even real) may have been “dramatic,” but they are not “traumatic.” Therefore, there can be no legitimate diagnosis of PTSD.

Why all the claims of PTSD from people who clearly don’t have it?  Well, PTSD has become the latest celebrity affliction; anyone who is anyone has PTSD these days. It also nests neatly within the current culture of victimization exemplified by things like “trigger warnings” and  “affluenza” that is ruining American society. Moreover, PTSD has become the latest political third rail; as we saw in the aftermath of the Melody Hensley article, people who question the (il)logic of specious PTSD claims are marginalized, shouted down, or told “check your privilege.”

Look, we don’t have a problem with people being upset that they are attacked online. We think that the military discharge appeals process is there for a reason, and if you can get your discharge upgraded to Honorable, good on you. But we do have a huge problem with people claiming PTSD in circumstances where it clearly isn’t warranted, particularly when it is used to excuse an individual’s poor life choices, deflect criticism, generate sympathy, or garner unwarranted benefits. And we also believe that putting people on an unimpeachable pedestal because they have (or at least claim to have) PTSD doesn’t do anyone any good. 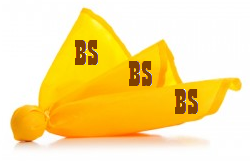 So, I’m throwing the BS flag. I don’t buy it for a second that someone can legitimately get PTSD for getting called names in basic training or by getting pushed around in cyberspace by Internet tough guys. I think there are conditions that can develop from such treatment:  anxiety… depression… adjustment disorders… but these don’t carry the street cred—or the dollar signs—of PTSD.  That’s why so many people want to claim PTSD when they simply don’t have it.

Sorry Melody Hensley, Lisa Weiszmiller, and everyone else like you: when it comes to PTSD, your “drama” is not “trauma.”  Use something else to get the attention you so desperately crave.