HomeCultureMusicWarpiper: Born of Battle and Bagpipes 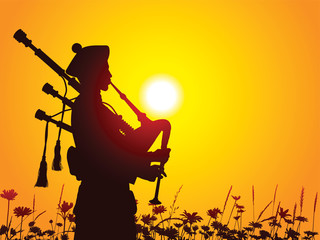 I am a piper. More specifically, I am a warpiper. I mastered my instrument before I knew war, much as I would eventually master medium and heavy machineguns, battle rifles, and an assortment of other tools made for killing men. The first time I played a set of highland bagpipes, the feeling was immense and indescribable. The ability to command such a powerful instrument and convey a mood of elation or utter sorrow was incredible. The first time I fired an M2 .50 caliber machine gun, my brain was equally unprepared to wholly understand what my hands were wielding and what they were then capable of. Both of these trades are a calling that not all men desire to meet and one that not all men are capable of fulfilling. On the one hand, the warrior exists to take lives and on the other, the piper is there to inspire men to courage or console the loss of a warfighter among his brothers and sisters. These are all hard, but necessary, jobs.

The idea of what the infantryman is varies depending upon who you ask. Much the same variation applies to what people believe a musician is. Not everyone is a fan of the rowdy and aggressive infantryman as many people are not a fan of the skirling bagpipes. They are special communities in their own respects, but much of what they are centered around is service and personal fulfillment. They are a calling, each in their own right. To be a member of the separate communities is special, but to combine them, is to experience something entirely different.

The warpipes, as they have been called throughout history, can apply to any bagpipe used in a time of war as the name implies. The Scots used them throughout their long and violent history and continue to do so today in the British Army. The Jordanians use the pipes in their armed forces, as well as many other states that have pipers in their militaries and in their communities and they are always a part of conflict in one manner or another when conflict is present. The bagpipes are even considered instruments of war according to older laws in Great Britain and even in the United States. They hold a special place among the broad spectrum of martial forces.

The din of battle has always been awe inspiring. Whether it was on the fields of Bannockburn, the open grounds of the American Civil War, the jungles of East Asia, or the deserts of the Middle East and North Africa, the warpipes were there. They can be heard through death and destruction. They can be heard through the pain and the tears. The warpipes and the warpipers are there because that is where the fighting is. That is where men sharpen their knives, clean their rifles, square away their kit, and ultimately face an enemy. That enemy may be unknown or numerous and the pipes are there to spread courage and incite men to meet their destiny. The losses will be hard and when the fighting has ceased, if only momentarily, the warpiper is there to give mournful tunes when there are not enough words to describe the feelings of loss.

There are many specialties in the militaries of the world, and many still in the United States Armed Forces. There are the men who are not weak or faint of heart, there are the few and the proud, there are those who free the oppressed, and so on. There are tankers, riflemen, airmen, sailors, snipers, medics, corpsmen, artillerymen, and many other forms of combat multipliers. They fight, they heal, they support their comrades and they are some of the greatest humans, of men and women, which may walk the earth. It is only fitting that before they fight and many times after they fall, that they are remembered in the distant and powerful lament of the warpipes.