HomeCultureMilitaryYour Story | Rise for the Fallen 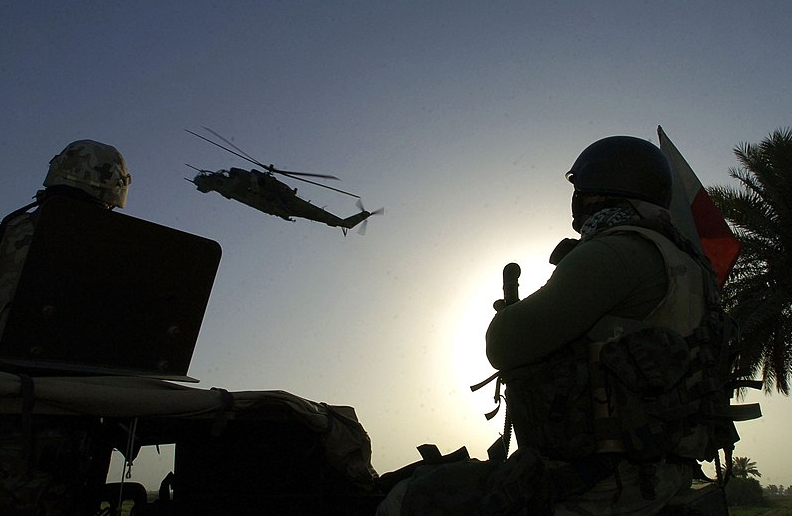 This first appeared in Britta’s blog, “Life After War” on May 5, 2018, and is republished with the author’s permission.

Note: The following is a first-person graphic account of an experience during combat. Please be aware that this story may contain triggers and read at your own discretion. I share this story to honor the warriors who lived it and to bring to light the sacred experiences warriors carry on their hearts.

We were Engineers 983rd Combat Heavy and transporting equipment and personnel to FOB Uvanni in Samarra, Iraq coming from FOB Speicher in Tikrit. It was May 8th, 2005, Mother’s Day. My first Mother’s Day since my Mom died on January 5th and Andy Eckert had just gotten back from seeing his son Myles born back in Ohio.

Cossette was riding shotgun as our TC, Michalski up in the turret with my SAW, Andy in back and I was driving. We were closing in on our destination when a massive IED struck our armored vehicle.

There’s a period directly after the explosion that had me in an odd state; I’m not certain how long it lasted, ten seconds or two minutes, but everything slowed down to a fraction of time. I wasn’t aware of anything, I couldn’t think, see or smell and everything was fading to black. I remember now the smoke, debris and materials in the air and all around us, the blackened, shattered windshield, Michalski’s leg on me, the deafening silence, Cossette staring at me with these monstrous doe eyes, but within that moment I wasn’t aware of any of it, all was blacked or greyed out; I remembered all of this afterward.

There was this question or thought kinda hanging on me or lingering during that moment; Where do we go from here? I’m not sure how that got into my head, what it means, or who ‘we’ even refers to. Then after an indeterminable amount of time, everything just sped up and in an instant I was out of my head and back in the driver’s seat of that armored humvee, reality raining chaos down on us.

Pushing Michalski’s leg off of me, I tried getting the vehicle back on the road as I could tell we were kinda blown to the side by the explosion. I was stomping on the accelerator trying to get this machine to accelerate; I kept thinking, if this humvee stalls and dies here, all of us in here and probably the soldiers in the vehicles behind us, die too. It eventually began to take off again after some sputtering and delay. The windshield was cooked, literally and impossible to see through. I found and grabbed my goggles off the floor and put them on as I was hanging out the door to see. The vehicles in front of us must have taken off and accelerated once the sound of the IED was heard and it left a solid wall of dust that we had to navigate in.

I was yelling at Cossette to call in that we’d been hit, not knowing how bad his arm was injured as he just stared at me, seemingly dazed and unresponsive. Michalski was asking for a knife to cut open Eckert’s uniform, as there was blood everywhere and he needed to find the wound to address. I gave him my pocket knife, found my headset that had been knocked from my Kevlar helmet, and tried calling in a medivac to FOB Uvanni.

Hanging out the door to see and drive, I began passing the vehicles in front of us to try and get to Uvanni as quickly as possible, knowing that time was against us as Andy was injured and unconscious. Michalski was yelling that he couldn’t find any wounds on Andy. I was yelling to him to make sure he was breathing and perform CPR if not. I cut the corner and zoomed through the ECP at Uvanni as a couple of soldiers must have known we were coming and were waving to us where to go. I think I had passed all of the vehicles in our convoy and was the first into Uvanni.

As I whipped in and parked near a group of soldiers, I immediately got out and ran around to the passenger side. Some soldiers were helping Cossette out of the front and I saw his arm and the damage for the first time. I kinda tried to help as they laid him down on a gurney or something and I felt terrible right then for screaming at him over and over to try and help.

I then went back to our humvee and there were about a dozen soldiers standing around the back door of it. I pushed through the crowd and began trying to open the door. The entire passenger side of the vehicle was charred black, smoking, and concave. I was yanking on the door but it would not open. I could see and hear the rest of our convoy pulling in and sending dust clouds all over the place and on us. Michalski was still inside, where he was trying to work on Andy. I yelled to him to start kicking on the door. Between him kicking on it and me and a few others yanking on it, finally, the door popped open.

Michalski helped slide him out as I scooped him up in my arms. I pulled him out as others began helping. We carried him over to the ground and laid him down. Some soldiers had come out from Uvanni with medical supplies. We needed to cut Eckert’s uniform off him to find the source of the blood. I remember hearing gunfire and recognized it as the cyclic rate and pop of an M249 SAW and not that of an AK-47. I looked up at our burnt-up vehicle and my SAW that Michalski was using wasn’t there and mounted on the humvee anymore. I was at the side of Andy’s head and kinda pulled Rams down beside me. I told her to position Andy’s head between her knees and legs to support it and stabilize his neck. We were wiping off his face and began to cut his uniform off. We quickly realized the blood was from his ears, eyes, and nose. They cleaned him up as the sound of a Bradley Armored Vehicle began closing in. Some more medical personnel was there and I backed away from the scene.

As they were loading up Eckert, Michalski was yelling at First Sergeant, who was holding the IV bag but just standing there dazed while they were trying to walk. I believe they were taking them to FOB Brassfield-Mora because they wouldn’t fly into this dangerous location. Someone was handing me a white cloth and I remember wondering about it; am I supposed to wave this for surrender or what? I was really confused and just stood there looking at it. Some female Sgt took it from me and began wiping my face which apparently had some blood and some black on it.

I went over to our vehicles and I was fuzzy and couldn’t think straight. I felt cold and like I was going to pass out. I think it was Cordero who helped me into a back seat of a humvee and gave me a bottle of water. Everything kept getting weirder and weirder. My head was pounding and I couldn’t hear. My vision was tunneled and blurry. I don’t remember much for a while but kinda came back to during a conversation about the route and convoy back up to Tikrit and FOB Speicher. We had no choice but to drive right past where we were just ambushed. We ended up driving to FOB Brassfield-Mora to drop off our First Sergeant and Commander so they could fly out with Eckert & Cossette.

This day is forever etched into my memory and I recall some or all of it every single day.

I think about the lives torn and forever altered by the events of that day. I believe it tragic to grasp that the trajectory in life can be modified so greatly by the events that unfold, but how tremendously majestic and fulfilling that the power to dictate the overall direction of our lives can rest in the efforts and perseverance of one person. We can take back control at any instance with deliberate dedication and genuine effort to make things right. I salute Tiffany Eckert in all she’s accomplished and the immeasurably amazing young people she’s raising. I salute Sgt Eckert for his ability to continue impacting change in many lives long after his death. His pursuit of life and encompassing military story is classic American Hero.

I’ll forever live out the rest of my days in constant effort to earn the opportunities provided to me by all those lost in Military Service. They gave up life for the possibility that it may enrich ours. It’s our obligation to put forth our best efforts in whatever we attempt and encounter.

Rise For The Fallen