HomeCultureMilitaryWhy I Ain’t No Fortunate Son 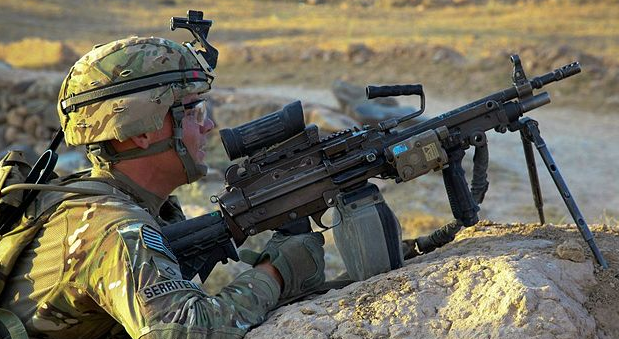 And that, for me, and to be frank for many others like me, was how this whole thing started.

I mean, it REALLY doesn’t sound super patriotic when you put it that way, right?  It was supposed to be for love of God and country, for apple pie.

Some folks are born made to wave the flag

Baseball, freedom, and democracy. Nope, for me, it was the money, pure and simple. Hey, at least it wasn’t because the judge said so, right?

So there I stood, shivering early in the pre-dawn morning because it paid for college. The air was crisp and- ok, fuck it, it was downright cold, dark as shit, I was freezing my ass off, and I couldn’t help but wonder if I’d made a colossal mistake. I didn’t belong here. I wasn’t a legacy. There was no “IV” after my name. There was no history of service in my family. I joined up to get out of my dead-end town with its dead-end prospects. I would do my time, get my education, and be on my way, thank you very much.

And then the war started.

Oh, baby! This was IT! I was aaaaaaall IN! Singing left foot, right foot, left foot…

KILL! For my country? You KNOW I will! My biggest worry was the blinding power of American sunshine and moral superiority would have things mopped up before I got my own chance to put Star-Spangled Foot to haji ass.

They send you down to war

And then it was my turn. I landed on a hot, dusty tarmac in Baghdad. Or was it Kabul? Mosul? I don’t fucking remember. First, second, fifth deployment, Jaish Al Mahdi, Taliban, and ISIS, all running together, shifting and swirling like the smoke from a Miami cigarette. A machine gun mambo plays in a background set to the kick drum of burst fired 5.56 and a tank cannon bass line, while cries for mama punctuate the chorus.

Endless speeches aired on Fox News and CNN about why we’re here, the importance of spreading democracy, defeating terrorism, the parade of dignitaries.

And when the band plays “Hail to the Chief”

In and out of the well-fortified mega-bases. Day in, day out, wake up, hit the road.

They point the cannon at you

Try not to fucking die. Waiting for your ticket to get punched. The round that just missed by centimeters. The trigger man that was a half-second late.

And then you come home.

You come home to long nights and lonely days surrounded by those whose patriotism rings hollow.  The ones who wave a flag but can’t find Kandahar City on a fucking map. The ones who changed the channel for the last 20 fucking years while we bled and died, bodies torn apart, nostrils choked with sand. The ones who quoted pundit generals with jingoistic glee.

And when you ask ’em, “How much should we give?”

Mouths foaming with patriotic fervor, with a handy story of how they “almost joined.” The girls with yellow ribbons tied in their hair, the women who made care packages for “Any Soldier,” the men insisting.

They only answer, “More, more, more”

We stay until the job is finished, and the boys who can’t wait for their turn. You watch friends who weren’t so lucky struggling to heal. The same ones who fought and bled now forgotten, a convenient talking point as long as they don’t talk back.

Now, the war is over. I sit in a tiny midwestern coffee shop, surrounded by salt-of-the-earth folk, the ones who wear a flag pin, go to church on Sunday, and never miss a chance to cheer the boys on under the Friday Night Lights. They ask questions. How could the generals get everything wrong? How did it collapse so quickly? Worst of all, they ask how we could leave Americans.

I ain’t no fortunate son

-behind. How could we abandon them?

To me the answer is easy.

You abandoned us the first time you changed the channel 19 years ago.

All three million of us.

[i] Words in bold are taken from “Fortunate Son” by Creedence Clearwater Revival.