HomeCultureMilitaryWe Have the Ability to Achieve the Impossible 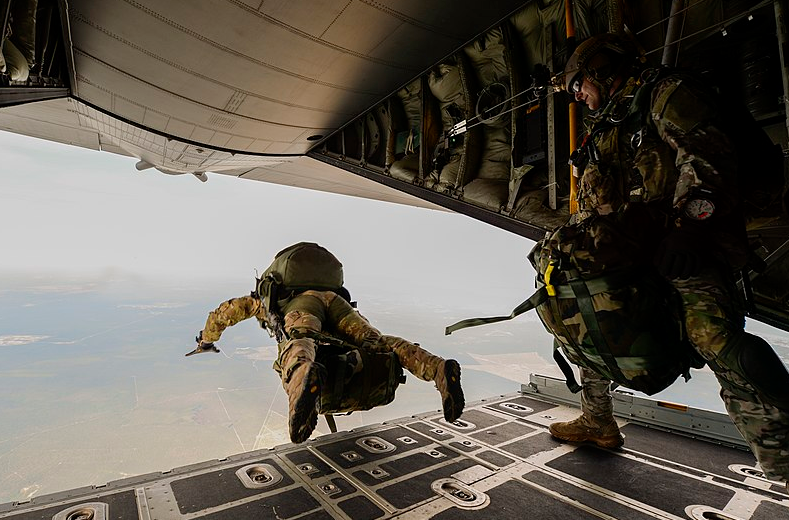 This first appeared in 18 Series Bag Company on April 9, 2022. It is republished here with the author’s permission.

We travel to 7th Special Forces Group (Airborne) for this week’s SITREP. Known as the Red Empire, 7th SFG(A) is geographically focused on South America. Prior to the withdrawal of Afghanistan, 7th SFG(A) has had a persistent presence there since 2001. These warriors have spent so much time deployed down south that they call it their second home. Their goal is to help advise, train, and assist South American countries’ Special Operation soldiers. These guys truly go native, attending schools in foreign countries, almost becoming part of the unit they are training. I’ve written about a few of these warriors below.

Through the SF network, I’m expertly guided towards vetted SF guys who have thrown their berets into the entrepreneurial ring. This is how I was introduced to Bald Bros. I texted Brent Cooper, Executive Director of the Green Beret Foundation, and asked for a 7th Special Forces Group referral. A minute later I had a number.

Spend two minutes on the phone with 1/3 of the Bald Bros and your first takeaway is that you want to get to know them better, they are good dudes. Chris, and his business partner Dan, have created something special with their company. Even if they are dive guys, there’s something about them that makes you like them.

As luck would have it, I conducted RIP with their Battalion in 2017, relieving another great 7th Group dude. Their Battalion leadership in 2nd Battalion was on point that deployment. I had a weird man-crush on their Battalion Commander after he told me about my mission against ISIS. It was simple. Stack bodies. Roger that, Sir (**as I curled my upper lip covered in ginger hair**). And stack them, we did.

I spoke with Chris about Bald Bros.  Chris recounted how he and his partner Dan (another 1/3), deployed to Kunduz, Afghanistan in 2017, with 2/7 SFG(A). Outside of their busy deployment, Chris traded unit patches with units co-located with his ODA. A patch is a visual representation of your professional identity that you can wear. Patches in the military are also something that is traded or bartered to remember your (sometimes foreign) mates.

Chris recounted how Bald Bros originally got started. Dan is a master woodworker, an 18C, known for his legendary plaques (see SITREP 17 for how I feel about plaques). During the downtime we all found ourselves during COVID, Chris made the most of his time by conducting internet searches for leather patches, he came up with nothing. He asked Dan if he could bring one of his new leather samples to try to burn a pattern on Dan’s laser engraver. After finally convincing Dan to let him experiment with the laser engraver, it worked, and it was awesome. Both guys started making leather team patches for their sister teams. It was only a matter of time before their leather patches went viral on social media. A short time later, Chris reenlisted and received a bonus, doing two things with it; paid off his truck and bought a leather engraver. Now they crank out patches to meet their crazy demand.

You can tell by their social media that Chris tells a story through his photography. Their Instagram is a mix of fun, business, and an honest portrayal of life in Special Forces. Their story, told by the camera, portrays the reality of SOF just as dudes, knocking down the myths surrounding Green Berets and perpetuating the good side of the SOF community.
They’ve teamed up with the last 1/3 of Bald Bros, Pat, and run Free State Gear, a purveyor of high-quality tactical gear. Having spent years in Force Modernization, methinks that Free State Gear needs to be introduced to the SOF Program Executive Office at SOCOM.  Every SOF operator would benefit from the chance at using their gear. Go to the website and prove me wrong. I am 100% sure that Eric Graves (from SITREP 17) at Soldier Systems would love to get a look at your gear.

Bald Bros, count me in for your next adventure, you guys are knocking it out of the park.

I regularly scroll through a couple of Instagram pages and websites that have a genuine feel to them. That’s what first grabbed my attention with FOG. When you see the photography on their page, you get a feel for what it’s like to be in the heat of it. I don’t miss much, but I miss being with the boys. I’m sure that every subsection of the military has its own cultural pages, the guys at FOG have made one for us.

The guys at FOG offer an awesome assortment of training, tailored for each specific customer. First up, medicine. Taught by medics forged in combat, these guys provide top-notch classes in the principles of hemorrhage control, massive casualty incident triage, situation management, and wound assessment and treatment. All these dudes sleep, breathe, and eat Close Quarter Battle (CQB). Knowing how to take care of fellow brothers during the conduct of an assault is part art, part science, and all heart. Being proficient in medical integration in CQB requires planning, practice, and rehearsals. That’s why the Special Operations combat medic is the global standard in trauma, without exception.

Take a look at the FOG website and check out their Roll-1 trauma pouch, a fantastic idea to get precious medical gear onto operators. Real estate on body armor comes at a premium price. Each pouch, case, or radio wire must be methodically placed for maximum efficiency and effectiveness. The Roll-1 trauma pouch is perfectly built to reduce operator equipment irritation. They also sell IFAK refills as well. These pre-packaged, vacuum-sealed little packages of gear could save your life, or in SOF terms and more importantly, your teammates.

Need a badass menu of Shooting and Marksmanship classes? FOG brings that too. Each class is taught by weapon and tactics experts such as Basic Rifle and Pistol Marksmanship, Advanced Rifle and Pistol Marksmanship, CQB at the basic and advanced levels, and long-range marksmanship. If I was in the corporate world and wanted to give the company’s employee’s an atta boy, I’d bring an operator from FOG to come to teach us. Why wouldn’t we get the best to help us spike our testosterone levels? Speaking of high-T levels, FOG also provides professional instruction in Military Free Fall (MFF). Taught by qualified MFF instructors, students go through individual body stabilization techniques, canopy control and grouping procedures, and nighttime MFF operations. If I ran the boiler room, we’d be doing MFF too.

The fellas at FOG are licensed as a contractor for the State Department so their work is regular, but they’ve been active on social media too. Through the FOG Instagram and YouTube presence, they’ve raised over ONE MILLION dollars, and counting, for the Green Beret Foundation, the Seal Future Fund, and various fundraisers/Gold Star charities that support the SOF community.

Justin explained to me that their goal is easy to understand, “some of my best friends want to help the community, spread our knowledge and experience to anyone looking to become more proficient, and just straight up have fun while we do it. Looking to always improve our individual competencies and collectively of the military/LE community.”

Justin, you guys are absolutely crushing it, I’m all in.

After writing about our nine, count’em, nine Green Beret and six Navy SEAL Congressional candidates, I was contacted by another SF guy, Mario Volpe.  Mario informed me about the American Oath Initiative (AOI), currently run by SOF brethren. We spoke on the phone for an hour, talking about the people that we both knew, careers, and what the future held for AOI.

Fun fact, a call designed to celebrate a brother’s efforts post service, Mario spoke about everyone but himself. He told me about the awesome people involved in AOI, their awesome supporters, as well as another 7th SFG alum in northern Virginia who runs a 501c3. That’s Mario, a selfless All-American.

The American Oath Initiative was founded in 2021 by Special Forces veteran Tony Cowden, who is currently running to represent North Carolina’s 3rd Congressional District (NC CD-3). The current leadership of AOI is led by veterans from the Special Operations and the Intelligence communities, who are committed to carrying on the fight in politics. The AOI, a political action committee (PAC) is currently run by Chief Operating Officer and Red Empire alumni, Mario Volpe.

Over our careers in the military and law enforcement, we all have worked with and come across some amazing leaders. AOI has expanded these connections to build a strong network across the country dedicated to identifying and supporting proven leaders for local, state, and federal offices. “The challenge ahead of us is no doubt a difficult one, but it’s time we attack the problem with strong leadership and the mindset that made us successful in our careers.”

Mario explained some history of the AOI, “We are currently experiencing a positive movement in some of the candidates’ races that we have endorsed. We are catching the attention of establishment politicians that believe they are untouchable, due to their large bank accounts and establishment protection. The excitement of our fellow veterans and supporters is rapidly growing.”

The structure of AOI is designed to place the fight on a few different fronts. The Federal Super PAC operates to support and endorse candidates who remember and adhere to their Oath and share pro-America values, while their non-profit 501(C)4 arm is growing into one of the premier sources of information and education for veterans and other principled Americans looking to make a difference in their communities.

Mario explained to me that every politician that doesn’t uphold their oath should take heed, “Through our vast network and regional districting, AOI will be able to identify these politicians and aim to back a solid leader with principles to unseat them, leaders that will not be bought and will remember the oath they take. We will not fray from opposing failed incumbents.”

It is difficult to deny that we are experiencing unparalleled complexity here at home and across the world including unprecedented domestic issues. I’m beyond proud that members of the SOF community are standing up to raise their hands to lead within their communities.

If you would like to learn more, get involved, follow, or contribute, visit the AOI linktree at https://linktr.ee/americanoathinitiative .

Mario, I’ll be watching closely and cheering from Colorado.