HomeCultureMilitaryVeterans, The Fourth of July, And Those Fireworks Signs: Don’t “Be Courteous,” Just “Be American”

It’s that time of year again—time for America to celebrate its very own “Brexit” in the most American way possible: gratuitous consumption and loud explosions. It’s the week of the Fourth of July, a time for beer, barbecues, and good old-fashioned Red, White, and Blue.

…and apparently, it’s time once again for veterans to put signs in their yards asking their neighbors to “be courteous with fireworks.”

“A combat veteran lives here, please be courteous with fireworks.”

When I saw my first “be courteous” sign a few years back, I hoped it was a fad that would pass quickly, or at least be widely mocked, once people put some actual thought into it; you know, like liberalism, or “pet rocks,” or COIN (counter insurgency). But apparently, this has turned into big business, with thousands of the signs manufactured, sold, and distributed across the US. 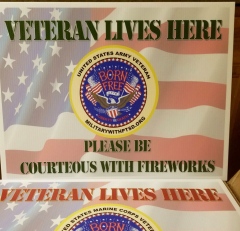 There is also a lot of controversy about the organization that produces and distributes those signs. More on that later, in a separate article.  But if you’re curious for a preview, you can check out what “This Ain’t Hell” has to say [editor’s note: link not accessible as of 23 Jun 2019].

But for now, the signs. With much respect and love to my fellow veterans who have them, I think these “be courteous” signs are a terrible idea. The message reinforces the worst stereotypes about us: that we’re all broken, that we’re attention-mongers, that we think we’re different and special, and that the American people should bend to our whims simply because we served. I think that’s a bad message for us to send, and an even worse mindset for us to have.

Reasonable people can disagree about the utility of the signs. Some veterans point out that with the plague of PTSD and the veteran suicide epidemic, reminding people that veterans are nearby and that loud noises can be triggering might help. Or, they reason, it can’t hurt.

Brothers and sisters, if your PTSD is so bad that you need to live in complete quiet then you need treatment, not a yard sign. Stop “self-medicating” and get professional help. If that’s not an option, or if it’s not coming in a timely manner, head over to the Super Wal-Mart and take matters into your own hands. Don’t wait on the government, or ask your neighbor, to do something for you that you can do yourself. Stop being “that guy” and be more like “this guy” (who isn’t a veteran, but is setting a good example for the Veteran Community when it comes to dealing with the 4th of July):

For whatever its costing for “shipping and handling” of these signs, I imagine you could buy a bottle of melatonin, a cup of warm milk, and a crapload of foam earplugs. That’s bound to be far more useful to you than a yard sign, which may or may not be heeded by your neighbors. In fact, the sign might have the unintended consequence of encouraging MORE noisy behavior.

The sign also has the unintended consequence of making people think veterans want America to change for us. Fellow vets, America doesn’t have to change for us, we have to change for it. What we did in uniform is essential work for our nation, but it doesn’t entitle us to ask for everyone around us to change. Post-traumatic stress exists, but so does post-traumatic growth. You’re not going to grow if you expect everything around you to change instead of changing yourself.

The American government owes us plenty. But not the American people. If you want to put a sign in your yard advocating for your rights under the 2nd Amendment or to ensure politicians keep the promises they made to the Veteran Community, or to bash the VA, by all means, go ahead. But don’t ask the American people to give us more than they already have.

Your signs aren’t going to help anything. In fact, they are going to make it worse.  They cause us to see ourselves as a class separate from our fellow citizens, and it causes our peers to see us as dangerous, broken, fragile, or as something to be feared.

Posting those signs is also an exercise in futility. I would no more change my lifestyle over a “veteran lives here” sign on my neighbor’s house than I would if it said, “Ultra-Liberal Hipster Lives Here: Please Be Courteous With Trigger Words.” Like my fellow veterans, I fought for our freedoms; I’m not about to ask other Americans to give them up on my behalf. Not over something like this. And if you really want to help a veteran, especially one who might be dealing with PTSD, don’t buy them one of these ridiculous signs.

This Fourth of July I’m not going to set off fireworks in my neighborhood for a couple of reasons: 1) they’re illegal where I live; 2) they’re expensive; 3) that shit is dangerous; just ask the New York Giants’ Jason Pierre-Paul.  But even if those things weren’t the case, I wouldn’t do it late at night. That’s not out of any “courtesy” to veterans, it’s just common courtesy to everyone.

But more importantly, I’m not going to put a sign in my yard asking people to NOT do what Americans have done every Fourth of July since before I was born. If the county’s fireworks show bothers me, or if the neighborhood kids start shooting off their (illegal) bottle rockets when I’m trying to sleep, I’ll put in earplugs, turn on music, and be happy that I live in a country that still raucously celebrates Freedom. Seven combat tours in Afghanistan and Iraq haven’t changed that feeling for me, and I’m not about it let it start now.

This article first appeared in The Havok Journal on June 29, 2016.