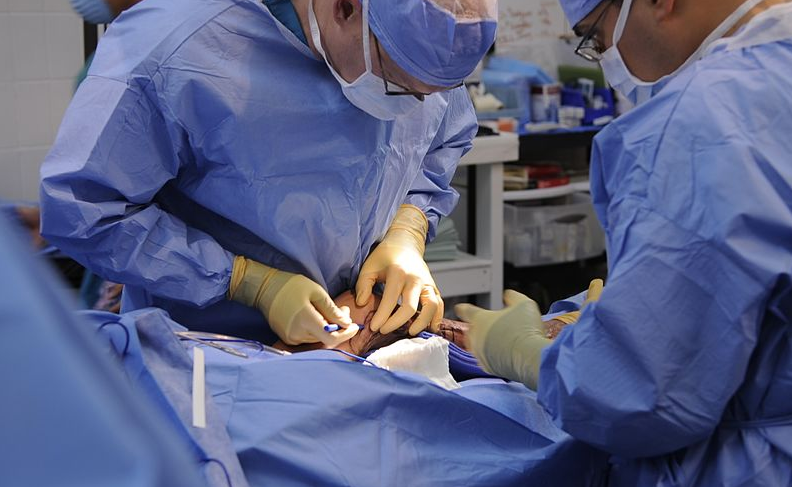 [Editor’s Note: Denise wrote the following in 2007 at age 14 based on conversations she had with her mother, a U.S. Army surgical technician]

Plagued with stories of the war in Iraq, the news regurgitates similar headlines, focusing solely on the soldiers fighting on the front lines, in immediate danger.

What happens to those soldiers that are wounded, dying? Is there no recognition for the countless men and women whose only job is to save the lives of others? The military medical personnel serving their time in Iraq are just as important as any other soldier serving our country.

My mother, SSG Velez, is a surgical technician in the Army, and not to hear recognition for her and others like her is very disconcerting. She has had to face many trials during her term in Iraq but one, in particular, seems to always stay at the forefront of her mind:

After placing her book into the small makeshift nightstand, my mother took a peek at the clock. It was already 10 pm.

“Night, Donna.” She told her roommate as she tucked herself under the covers. “Let’s hope this is a quiet night. Seems almost as if something is just waiting to happen…” She recorded her words inside her head, drying the unease they presented as they dripped from her lips.

Donna added. “You’re right. It seems like it’s been quiet for a while. Something is due to happen any day now.”

Ironically, at four in the morning, they hear the blaring of sirens and the overhead alarm announcing a MASCAL– a mass casualty event.

Her heart was pounding as her training and instincts kicked in. During MASCALs it is imperative the surgical teams go directly to the hospital. Throwing on her PT shirt and shorts, hastily sticking her feet in her sneakers and whipping her hair in a messy bun, she grabbed her weapon and dashed to the medical facility.

Thankfully, the hospital was located just across the street. With her flashlight attached to her weapon she had no problem making her way. Her shadow indistinguishable in the darkness, the sound of her sneakers’ contact against the sharp gravel was the only allusion to movement.

Clearing her weapon prior to going inside, she made it inside the hospital.

The operating room was a fluster of exhausted bodies by the time she reached her destination. Assignments were being announced, teams made. My mother was paired with Dr. Lee, the orthopedic surgeon.

As the surigcal technicain she prepare the supplies in order: casting material for splints, ace bandages, gauzes, betadine solution. Even the water bucket was ready to dip the splinting material.

There’s not time to waste during a MASCAL.

“You ready, partner?” Dr. Lee asked, after a long sigh.

“Follow my lead,” he directed. “As soon as they start bringing the casualties in, we do our rapid assessment and reassess any ortho injuries.”

Not ten minutes after that the first helicopter landed with six patients. Not a single one of the surgical team knew that they were all children. My mother was caught off guard and it hit her hard. Pushing back the tears she put her focus on helping Dr. Lee.

A little boy about twelve, with the body of an eight-year-old, was their first patient. Both legs were wrapped in gauze, drenched in crimson blood. Not a single bit of the original color of the cottony fabric showed through.

It was her job to cut through the gauze so that Dr. Lee could check the damage and see if it was something orthopedic that they could treat in the OR.

“Not a problem, Sir.” She grabbed the bandage scissors from her pocket and began cutting. The more she cut the more blood seemed to pour steadily from the wound.

She looked up at Dr. Lee. “Sir, do you want me to keep cutting?”

“Good job, now bandage it up and splint it while I do this side.”

She did what she was told and by the time they look up there have been seven more children delivered to the hospital via helicopter. The kids all ranged from about five to sixteen. Dr. Lee and my mother ran from bed to bed, stripping off blood-soaked bandages and re-splinting arms and legs with quick efficiency.

My mother was so focused on her work that she didn’t have much time to think about anything else but getting those kids taken care of as soon as possible.

“One bird left!” Came the news. They had found a little girl of about six in the rubble who had sustained a massive abdominal injury.

When the last helicopter landed, they wheeled her in. She was crying hysterically and calling for her mother.

That was when my mother couldn’t ignore how much seeing those children affected her. “Get yourself together, Ivette,” she told herself. She couldn’t think of anything else to help retain her composure. “I know I will call them when this is done and I will feel better.” She reassured herself, thinking of her four children. Knowing that she had the opportunity to call and talk to her kids was all she needed.

She ambled with Dr. Lee to the trembling girl. She was still awake and surprisingly alert, which was impressive, considering the damage to her abdomen was so horrific. Her intestines were literally hanging outside of her frail body. The little girl did not have any other injuries.

“Thank God. Dios mio, that poor baby wouldn’t have made it this far, had she had anything else!” my mother thoguht.

They wheeled her into the operating room fairly quickly and after about five hours of working on her she was taken to the the intensive care unit and was in stable condition. As they irrigated her abdominal cavity for internal bleeding or injury my mother couldn’t help but see the eyes of her own little girl staring back at her blankly.

My mother further assisted Dr. Lee in several other orthopedic cases. When they had time to breathe, my mother found out what had happened to the children. It turned out the kids were waiting for their parents to finish work at one of the mills in Tal Afar and a suicide bomber put himself between the groups of children and blew himself up.

“How could someone do such a thing?”

That night they had received 22 children total. Unfortunately, they lost one to traumatic wounds; he never even made it to the hospital.

When she was finally released to go, my mother had already spent hours at the hospital. She stepped outside and walked away from the hospital. The tears she had struggled to keep back fell freely. She could not stop them nor did she want to.

She cried for all the innocent children, for their mothers and fathers. They only MEDEVAC the injured so the kids came alone with no parents or relatives. It would take a while until they could be brought to them.

She sat on the curb and put her head down, her tears falling arou\nd the soil at her feet. “God, please give me strength. I don’t feel that I can do this again. It hurts too much. I can’t just do my job. I feel as if I’m emotionally attached to each and every patients I touched. It hurts and I don’t know how to deal with it…”

It felt like an eternity to her as she silently sobbed alone. She cried until the tears ceased to drift down her wet lower lashes. Wiping her face clean she looked down and noticed that she was covered in blood. But it wasn’t her own.

She got up and went to call her children and as luck should have it, the phones weren’t working. It would be a few days until she could hear their voices over the memory of those of the scared children waiting in the hospital beds.

This first appeared in The Havok Journal on November 2, 2020.